Dr Masaru Emoto, the Japanese scientist and water researcher, revealed the true nature of water and how thoughts and vibrations affect the molecular structure of water. In his years of doing research with water, through high speed photography of thousands of water crystals, Dr Emoto has shown the most beautiful crystals are those formed after the water is exposed to the words ‘love and gratitude.’

The fact that the human body is made of 70% water, our thoughts can have profound implications on our health and the well-being of the planet.

He discovered that water from clear springs and water that has been exposed to loving words shows brilliant, complex, and colorful snowflake patterns, while water from polluted sources or water exposed to negative thoughts forms incomplete, asymmetrical patterns with dull colors.

Fractal Enlightenment had the opportunity to interview Dr Emoto. He sheds light on the responsive nature of water to human emotions which can be utilized to heal mankind and earth, the Holy water of River Ganges and high vibrations of hemp to combat nuclear radiations in Fukushima.

You can also read about Emoto’s experiments with water.

What sparked your interest to discover the mystery of water? 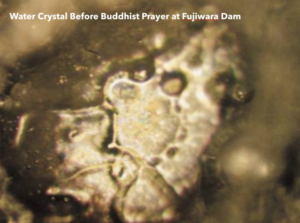 First, I was using water with information to cure people’s diseases, and it gained a lot of good results. However, people did not believe that because one needs to see in order to believe. I was thinking how I can make this visible and one day, I found a book about snowflake crystals and I thought that this was it.

A snowflake is basically water, so I thought if I freeze the water and use a microscope to see the insides of a water molecule, I could capture something in there, that’s how I came up with the water crystal technology.

You mentioned that you used water with information to cure people’s diseases, and it gained a lot of good results? How can water be used to cure diseases and what kind of diseases?

I used Hado (vibrational) measuring device called MRA which can measure negative emotional vibration that a human has and when it is detected, opposite vibration can be added to the water and by drinking that water, the negative feeling will go away. 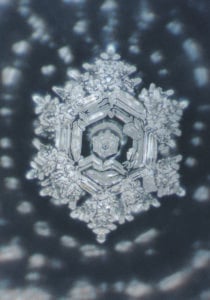 How do positive thoughts affect us, the environment we live in, and the planet as a whole?

Positive words, photos and prayers can make water create beautiful hexagonal water crystals, but negative ones will create ugly looking water crystals. Any living creature is made out of water, and even minerals and the planet itself are the same. The positive thoughts can make any related things beautiful and harmonized.

In this fast-paced world when people are stuck in a routine, how do you think people can maintain a positive outlook?

What are the basic differences in the crystalline structure of water?

In order to improve the conductivity of information, there needs to be geometric designs with golden proportion that can be seen in pyramids. In case of water, its water structure shows superimposed pyramids three-dimensionally and the more perfect it is, the more beautiful hexagonal water crystals it becomes.

In India, the holy river of Ganga (one of the polluted rivers in the country) has high levels of toxic pollutants, but in spite of that thousands of devotees bathe in the Ganga each day with the belief that it prevents diseases. Do you think the positive thoughts of devotees affects the Holy Ganges to an extent that it prevents large-scale epidemics? Research has also stated that Ganges has special self-purifying properties. Do you think the molecular structure of River Ganges might be distorted, but yet have some healing vibration? 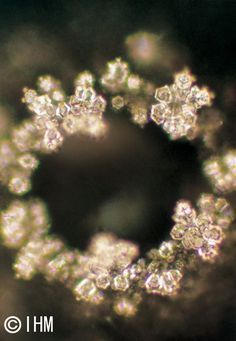 However, if Japanese tourists drink that water, they would immediately get sick. I would also imagine if a pious Hindu learnt how to take water crystal photos, they would get the most beautiful looking water crystals from the water in River Ganges.

Critics claim that your work is ‘pseudoscience’ and doubt the process behind it, what is your response to such statements?

Current science exists in a 3 dimensional world, but the world of water is multidimensional, and I believe water crystals are in the world of 4th and 5th dimension. So they can say my research is pseudoscience in lower dimension, but I hope it to be called parascience.

I came across a video of you on the planting of hemp at Fukushima because of its high vibration levels, what is the effect of Hemp’s vibrations?

Now my focus is issues in Fukushima. I already have technology and water to protect from nuclear radiations. It is more like activity but I make this water and send it to people and children in Fukushima.

What technology do you plan to use in Fukushima?

It is the technology that was invented by Russian Scientists, and it is the water technology to combat with nuclear radiations.

I believe when the true education for water prevails anywhere in the world, the condition for the planet will be liveable. Otherwise, a lot of natural disasters like Tsunami and flood will happen, resulting in a lot of sacrifices of human lives.

Dr Masaru Emoto is an renowned researcher who has gained worldwide acclaim by showing how water is deeply connected to our individual and collective consciousness. Born in Japan, he is a graduate of the Yokahama Municipal University’s Department of Humanities and Sciences with a focus on International Relations.

In 1992, he received certification from the Open International University as a Doctor of Alternative Medicine. Dr Emoto is the author of several bestselling books, including The Hidden Messages in Water, The True Power of Water, and The Secret Life of Water. He heads the worldwide Hado Instructor School where he teaches the ancient principle of hado, or life-force vibration.

Alot of the ceremonies that i know of include Water and the qualities of its existence.

Alot of the ceremonies that i know of include Water and the qualities of its existence.

Would be interest to get hold of scientific method so it would be possible to recreate these results.

Would be interest to get hold of scientific method so it would be possible to recreate these results.

There’s a really really easy way to prove how totally bogus the points being made in this article are. The next time it snows, grab some snow and put it under a microscope. What do you see? You see beautiful ornate patterns. Why? Because that’s how water always freezes. From the looks of it, I would guess this guy isn’t even photographing frozen water for the “negative” side of the emotional spectrum. Those photos look like liquid water ripples (which are always gonna be less structured than ice crystals). Water molecules are always more structured in a solid state than… Read more »

You sound acidic, dehydrated and stuck in the 3 dimensional world he mentioned. Let’s see your decade’s of experiments and positive change to the world.

ok, then how about music and sand on a board? or water in a singing bowl to show the formation of the water according to sound given out? sound is vibrations right? and so is thought.