The Nude Culture of Germany 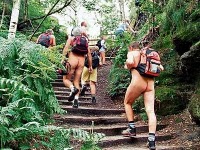 The Germans have incorporated nudism in their daily life, frolicking on beaches to climbing hills nude seems to be quite a common sight there.

It seems the first nudist colony was established just outside Hamburg in 1904 by Paul Zimmerman, Freikörperkultur which translates as free body culture or FKK has a following all over the country.

To get into a sauna in Germany with a bathing suit on is odd, every state has organizations who offer packages and locations for people to get naked and soak up the sun or just relax. Lets take a closer look at whats been making the rounds when it comes to the clothes free Germany.

The first one is the Germans versus the Polish, recently the border between the two countries were knocked off in January, there seems to be a problem on Usedom beach.

The Polish seem to be unhappy with the naked people on the beach, like Anja who is 28 from Poland, who can’t stand the Germans getting tanned under the sun, said, “It’s horrible. We would never bathe naked, we are Catholic.” 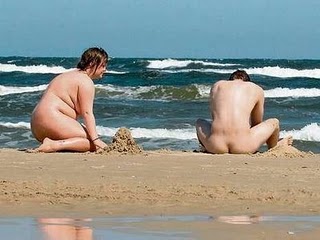 Well the Germans seem to be having a rather good time on the beach though, the tradition is followed from grand parents to grand children, the entire family is getting naked on the beach, enjoying the air against their skin, the way we were created, but they have a problem as well.

Ines Müller added, “You feel like an ape in a zoo. The Poles come with their binoculars, stare and swear.”

Theres a war going on between the nude Germans and the covered Poles, now if that was interesting, imagine a group of 10 Germans who trek nude, they have nothing apart from shoes and backpacks.

Siegfried Grawert (51) was charged quite a few times for indecent exposure and disturbing the peace amounting to over 2,000 Euros. But he avoided paying them until the police finally arrested him when he was home. But Siegfried is determined to fight for his nudist rights, “Many think I am sick, an exhibitionist but that’s not the case. Being naked is the most natural thing in the world.”

Siegfried explains, “We don’t need clothes, don’t have to do laundry, save time and are helping the environment. The skin can breathe better. It makes me stronger.” 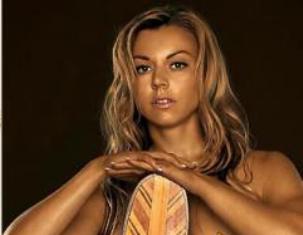 Now the German Athletes who participated in the Chinese Olympics although three of them did not get a medal, the four participant’s ended up on the gold cover of the August playboy magazine.

Featured in Playboy was Petra Niemann, who competed at her third games in sailing, Katharina Scholz a field hockey competitor, Nicole Reinhard is competed in canoe/kayak and Romy Tarangul competed in judo.

Spas in Germany often have clothing free days and many swimming pools are also clothing optional. The options of walking about in the nude possibly will make people take better care of their bodies and also the feeling of being one with nature.

I hope this article doesn’t send tons of perverts to Germany, its nice and quite strange for us to see nudity as a natural part of life there apart from the beer and sausages that is!

What is the Harshest Truth

What is the harshest truth you've learned? The world will not treat you better just because you are a good person.~ Unknown
Quote Library

Send this to a friend