The Hidden Cost of the Holidays 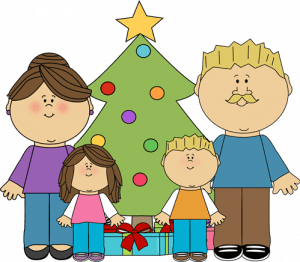 This clipart is what most people in developed countries think when Christmas comes to mind. Unfortunately, it only represents a portion of reality.

I had an epiphany after Christmas of 2008. My family and extended family (including those who are not blood relatives) have done an immense amount to help take me through troublesome times and have given so much to me. So usually what I would do during Christmas is take out a loan on my visa, and suffer with the interest charges until I paid it back. This was at a time in which I barely had enough money to buy groceries each week. To me, at the time, it was worth it to make them happy to see my gifts. And I felt like I owed them, which in a sense I did and do, but I was repaying them in totally the wrong way. I had no idea of what the total scope of my actions were doing.

Carey and Angela Price are two people who are well known for their philanthropy. Carey is the starting goaltender for the Montréal Canadiens of the NHL, and both Carey and Angela have used their fame and fortune as a leverage point to give back to their community. They also set a great example for what we all should be doing during Christmas.

When they receive a gift from friends, they return it to their friends, citing that they have more than enough material possessions and do not need anything further. They encourage the gift givers to pay it forward to someone else. They also make a donation in each family member’s name to a charity, instead of giving a gift.

It is easy to say that just because Carey and Angela are wealthy, that they can afford to do that and I can’t. But you do not have to be multi-millionaire to have a house full of stuff that you do not need, or to be encompassed in materialism.

There are many less fortunate families who invest a large portion of what little they have and go in to debt all because of the social pressures of the holidays. And as mentioned, there are poor university students who can barely feed themselves who do the same. Is this really a financially sustainable and healthy way of living?

Ask yourself these two questions as well. How many gifts have been given to you over the course of your life? How many of these gifts do you still have?

And also this one: How many of these gifts do you use regularly?

The answers are probably as follows: A ton, not very many, and even less.

There are also many other more serious reasons as to why we should all adopt the Price’s lifestyle choices as well. Yes, I admit that there are times in which we need to purchase items, that is reality. But we can no longer ignore the fact that when we purchase items in excess, we are just giving our power right back to millionaires and billionaires. Even if you are making a low end 6-figure salary per year, their salaries are still over 170 times greater than yours. Why throw so much of your hard-earned money right back to the top of the financial pyramid?

It is even more disheartening to see families who are living below the poverty line throwing their money right back to the very people who keep them as minimum wage (or just above) slaves. We are all people with varying abilities, and some people in this world just are not capable of getting out of such a position, no matter what some of us might say. We need people to work in stores if we want to have stores. If Mike Duke died tomorrow, or all of the workers in Wal-Mart died tomorrow, which would have a greater effect on the company? Not only are businesses like Wal-Mart and Target not offering a fair wage, they are capitalizing on the social pressures which are contributing to keep them disempowered.

I can hear what some people are saying now. “But it is their choice whether or not they want to buy stuff at these outlets.” That’s absolutely correct. And what I am saying is because of the reasons that are listed in this article, people should choose other options over the holidays instead, such as buying local, buying second hand, giving to charities, and making their own gifts.

Let’s explore the effects that our consumption habits have on the rest of the world. We need to recognize that it is not the workers and poor of first world countries who are the most disempowered people. It is the workers of labour camps who work in unholy conditions.

Try and find one person in North America who has not made a purchase which was made from child labor. I am guilty of this as well. I have made changes in my life recently in that respect, but I have still done it. We are all guilty of this crime, and this needs to change.

Workers slave away at Foxconn, where there was a recent PR disaster with respect to workers committing suicide. One of their solutions, instead of paying them a fair wage, was to put suicide nets on the outside of their buildings, catching workers who may try to make the plunge.

It is no secret that most of the toys and clothes that we buy are made in places such as China and Bangladesh by workers whose wages are astronomically low. Foxconn, located in China, is a work camp which assembles technology. They pay workers roughly 179 dollars per month. They work about 12 hour per day or more, and rarely get days off. Apple is their biggest name, but other companies such as Sony, Nintendo, Amazon, HP and Dell all do business with them as well. If you own something from these companies, chances are it was in a Foxconn work camp.

Also, many of us do not realize that if you are purchasing a diamond for a significant other, chances are that you did not know that it is coming from blood and sweat of young slaves. Many of these workers are 8 to 16 years of age and facing conditions such as starvation, breathing in fragments of minerals and debris which can cause serious illness, and working around the malaria virus. Many are young males recruited from the poorest of communities of Africa for this. This is another clear example of corporations capitalizing on the misfortune of others, and we are equally to blame as we support them with our money.

However it is important to note that we do not typically wake up with the intention of supporting such malfaisant companies, it is just that crimes against humanity are so far removed that we do not see first hand their effects on society. Therefore, they are easy for us to ignore. This is clearly done intentionally by the powers that be; if it were our own brothers and sisters working under such conditions, there is no way that we would be so quick to support these entities with our money. But in reality, these are our brothers and sisters. We are all human and we need to embrace this fact to get rid of not only this, but the racism, war and bigotry that exists today.

So while we are empowering millionaires and billionaires, we are also simultaneously disempowering those who work in horrifying and slave-like conditions. All of this is without even mentioning the obvious toll that the transportation of these products takes on the environment.

Let’s ask ourselves another set of questions and try to respond to them honestly. How many people view a part of Christmas as a sort of social competition? How many people evaluate and subconsciously rank people by the quality of gifts that they gave you and how much you perceive that was spent on those gifts? How many people have gossiped behind a gift giver’s back, saying that their gift was too cheap or not “good” enough for them, compared to what others have given you?

This is a silent reality of the holidays, and quite frankly it is a sign that the way we think about the holidays is wrong on so many levels. Look at where most of our gifts come from; how spoiled are we for even entertaining these notions in our head?

And you cannot totally blame the individual on this one. Just look at the influence and pressure from media and corporations on our society.

The “What did you get?” ad campaign from Target is a prime example of the erroneous mindset that is cast on to us from youth. Not what did you give, but what did you get. And we allow our children, the future of this planet, to absorb this garbage from the mainstream media without even giving it a second thought.

The De Beers diamond ad campaign is directed more towards engagement rings, but we cannot ignore the fact that there is an ample amount of jewelery purchased during the holidays as well.

Nobody knows for sure if God exists or not. But to all you Christians out there, please know that if he does exist, he is not happy with the way that we celebrate his son’s birthday.

This article seems to imply that we should radically change the system we live in. That is an accurate assessment, but we must remember that sustainable and effective change takes time. So what can we do for now?

Buy second-hand gifts, buy gifts locally, use your creative side to make your own gifts, and give to charities in other people’s name. And do not just do this during the holidays, make it a new part of your life. Just start by making small changes and make an effort to move in a more positive direction. That is all we can do.

Jeremy MacDonald
Jeremy MacDonald is taking a break from his career in education to focus on writing. He hopes to help bridge the gap between abstract concepts and modern science, and help people to embrace a more positive, humble, and meaningful existence. As he likes to say, “You are never fully awake; your soul is always a work in progress.”

Very well written. Very true. I often glance at where clothing is made

We base out happiness on material possessions in a lot is cases. We must try to be more aware.