The whole subject of crop circles was filed under solved when duo Doug Bower and Dave Chorley revealed that it was they, and not extra-terrestrials who had been setting out at night since 1978 to craft such bafflingly cryptic symbols in and around the rolling hills of Wiltshire County, England.

It is also surprisingly not a talking point among cynics that this duo have laid claim to hundreds of crop circles; both impressive and next to impossible to create by human hand, let alone in one night and with only the use of barrels and hand scythes.

Historians have revealed that not only were crop circles documented in 1945 – 33 years befor
e these hoaxers claim to have began work… or begun crawling, but also as far back as 1880, where one was written about in a science journal. And, even earlier than that, it’s believed that the first mention of a crop circle was in a 1678 news pamphlet “Strange News Out of Hartfordshire”, which has now become more commonly known as “The Mowing Devil”.

So what are we to believe? Are these fantastically crafted and prolific (at an average of 50 every year) circles designed and perfectly executed by two drunk moonrakers, or are they to be credited to someone… or something else entirely?

Cynics have answered many questions adequately; the more complex circles were created with lasers, the circles are made simply in the same way a compass works, bending back the crop in one direction forming a neat and pleasing effect when viewed from above. There was also an account of a crop formation being created over three nights to prove that they were man-made, but for many questions are left over the more sophisticated designs. 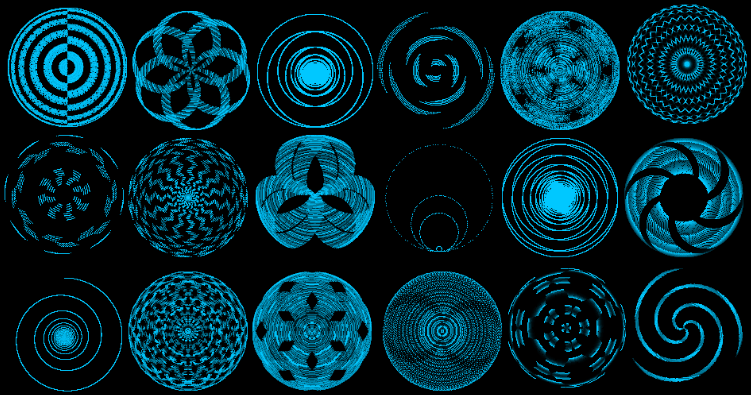 No tracks through the crop leading up to the circles, perfect circles and sweep of the crop, evidence that the crop was cut down by a short, sharp blast from above… the list is endless in support of the ‘something else’ creating these natural masterpieces. But if the explanation does go further than a man-made one, then why are they being created?

Some theories including many new age writers on the subject indicate that the symbols themselves transmit a huge amount of information into the onlooker, whether they are there in the flesh or simply viewing the symbol in a photograph. Others say that to stand in a crop circle is to receive a huge amount of information and many have reported dramatic physical changes:

“That burst of energy – before it disperses – affects our cameras, affects our compasses, makes people dizzy, makes dogs sick – a lot of people have had that.” ~ Francine Blake, Coordinator of The Wiltshire Crop Circle Study Group.

With no real study been made, the list of possibilities for the ‘something’ includes animals, the paranormal, adverse weather conditions and some inexplicable natural phenomenon. The most widely disputed but favourite explanation of course belongs to the idea they were created by extra-terrestrials as some sort of sign that we are not alone. Enthusiasts of that theory like to see it as a sign we are being watched over and helped as the planet reaches dangerous levels of pollution and examples of human destruction.

Unlike ancient geoglyphs such as the Nazca Lines in Peru, crop circles are an ongoing phenomenon in that they are continuously and increasingly appearing with the average rising by the end of each harvest. And why do they occur in such a specific place as the ancient town of Wessex, so close to the famous stone circle of Stonehenge?

Again the cynics point the finger at the willingness to believe in such phenomena. For example crop circles don’t occur in the Middle East where no-one would be interested in them or debate their origin.

Another theory is that they relate to ley lines – the earth’s chakras, interestingly enough relating to the heart chakra which runs across South West England; in Glastonbury (ancient Avalon where the stories of King Arthur and the Holy Grail originate), Avebury where another stone circle resides, and none other than Stonehenge. The link to Stonehenge as far as extra terrestrials go is that the land in a centre of information; a unique point where connections have been made for millennia, and Stonehenge the chosen monument to honour that.

Some even believe that the stones where moved from their origin in Wales to the site using communal psycho kinesis, which continues the speculation over what the stones are all about – sound illusion, ancient calendar or mass graveyard?

Whatever the theories and personal beliefs on the origin of the stones and the crop formations that litter the hills, you have to admit it’s an exciting mystery. One of which, may even be solved one day, once and for all.

Fractals are repeating, geometrical patterns that are found in nature and in human creations throughout history, from indigenous cultures to modern ones. Their regular...

Creating a Mandala to Manifest Your Intention

"Each person’s life is like a mandala – a vast, limitless circle. We stand in the center of our own circle, and everything we...

Ancient Civilizations: The Theories of Atlantis and Lemuria

Lemuria The continent of Lemuria, though largely discounted by the theory of plate tectonics and the existence of other sunken continents still visible on the...

Fractals occur naturally in every scale of life from the inconceivably large to the microscopic, and as I have always said, one needs to...

It’s no wonder that crop circles have been a talking point for years. Remarkably however, little do the cynics know these strange formations best...