Fractal EnlightenmentVR1
HomeSpirituality3 Tarot Packs to Awaken the Magician Within

3 Tarot Packs to Awaken the Magician Within

“I feel that it is vital that we all re-open our spiritual gifts and open up to the voice of the Divine.” ~ Doreen Virtue

Although the pack of the Tarot (also known as trionfi, tarocchi and tarock) began in the mid 14th century as a game of cards, by the late 18th century and ever since it has been a favorite tool of divination and a way to seek one’s own advice through the law of attraction. One suggested theory on how the Tarot may work, is much to do with vibrations.

If each card in the 78-card deck is attached to a vibration that reflects a law or lesson in life (take the lesson of the Three of Coins or Pentacles being the lesson of beginning a business and working hard on building good foundations), then when your vibration matches that of the cards, and its relationship to the positioning in your reading (knowing that the next card drawn will be the near future), then you will attract that card and pick it for your reading.

Of course this makes the act of Tarot reading highly personal and reflects the fact that we create our own destiny, as we could as easily draw a card meaning strife as we could one meaning contentment depending on our mood that day.

But Tarot can be a spiritual practice as – with anything – the more grounded and in touch you are with your true self, the more you are able to access real information, and even good advice.

Reading the Tarot for others can be an art too and be the work of a light being, or an avenue for helping others shine brighter and becoming more loving towards themselves. Whether you’re a fan or a cynic, here are a few famous decks throughout the ages.

The Tarot of Marseilles

Although the first decks known to enter Europe were those such as ‘The Visconti-Sforza’ and Sola-Busca Decks, originating in Italy and France in the 14th century, it wasn’t until the printing press came along that Tarot decks were able to be mass produced and become as popular as they are today.

The Tarot de Marseille from France was one such deck, sworn to be ‘the true oracle of the common man’. Featuring ‘Batons’ instead of wands or rods, coins, swords and cups, the Marseille deck includes Le Papesse or female Pope/high priestess, Le Bateleur or Juggler/Magician, and La Maison Dieu or the house of God/Tower.

Although the suit cards are latticed batons or symmetrical cups similar to an ordinary pack of playing cards, the trump cards or Major Arcana feature wide and important figures seemingly squashed into their small frames. Because of the simplicity of the suit cards, unlike many later decks, the Tarot de Marseille gives little indication to the lesson of each of these cards. 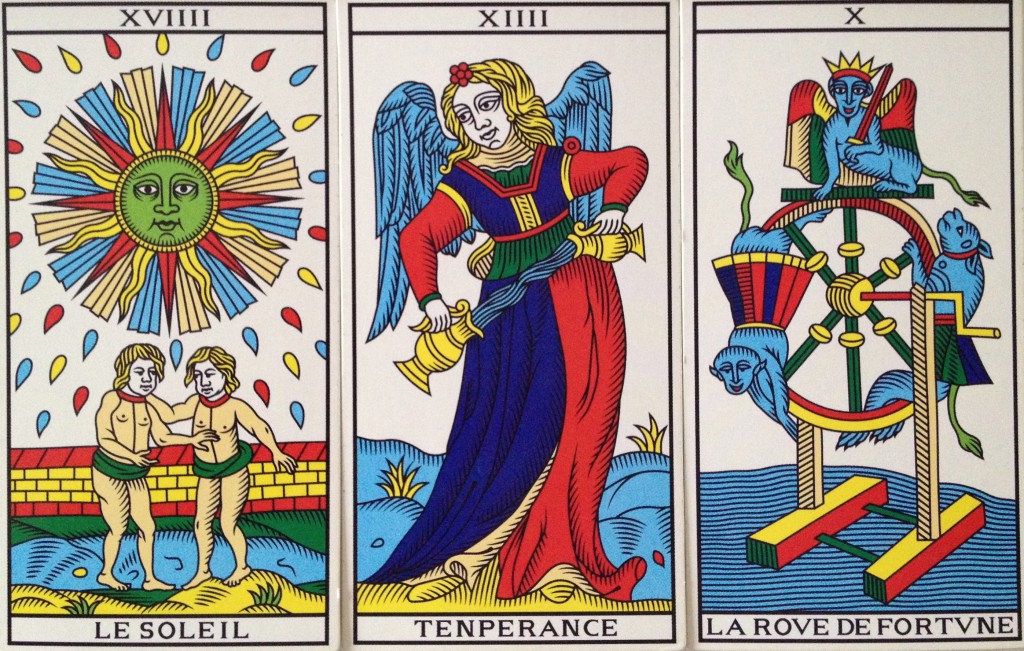 The Tarot de Marseille has also caused some controversy (particularly in Rome as you can imagine) for portraying the Pope as female. Though traditionally the High Priestess is a feminine card, many believe that this card is based around the story of the mythical Pope Joan. Variants of the Marseille like the Swiss Tarot, replace the Pope and Papess with Juno and her peacock, and Jupiter with his eagle.

Introduced into the UK in 1910, the Rider Waite deck was published by William Rider and Son, and then complimented the following year with a guide entitled ‘The Key to the Tarot’ that decoded the rich symbolism of the deck and became the most popular deck to this day. The deck was illustrated by artist Pamela Colman Smith and really does depict the lessons of the Tarot perfectly; perhaps this being the reason for its popularity and wide use in cultural and media references.

Notable cards include the Four of Cups where a figure sits under a tree contemplating the three cups before them whilst completely ignoring the fourth cup floating in the air next to their heads; another possible solution at hand you might not be considering. The card of Strength depicting a woman, who on first glance is wrestling a lion actually turns out to be compassionately embracing it, and the distinctly cocky yet leisurely stance of The Fool, poised to take his final step off the cliff and into complete trust.

Similar to the in-depth mythological references of many modern decks, the Rider takes the suit cards to a new level with a story or clear progression attached to each suit. The cups for example, clearly illustrates the progression of love or a relationship, the swords a meeting with our shadow selves or ego, the pentacles our journey through business and work to wealth and family, and the wands through that of action and adventure.

Hermetic Tarot was associated with an occult movement (as was certain spreads such as the cross and triangle) with the Hermetic Order of the Golden Dawn. Carl Jung is even said to have used the symbolism in the Hermetic packs to explore imagination and the psyche, and as with any Tarot pack the Major Arcana deals heavily with the archetypes that every soul must pass through in order to achieve enlightenment. The symbols used in the Hermetic decks are said to be symbols of alchemy or transformation and pagan or eclectic in comparison to some earlier, Christian symbolism in the packs used for 14th century games.

Occultist and magician, Aleister Crowley designed his own deck, the Book of Thoth which draws heavily on Egyptian symbolism and some distinct variations from the Rider deck, notably; Strength becoming Lust, Temperance becoming Art, and The World becoming The Universe. Not only that but the suit cards correspond to different planets and star signs, such as Capricorn being the 2nd, 3rd and 4th of Disks (Pentacles/Coins) and with it the evolution of the sign; Change, Works and Power.

Notable cards include The Wheel of Fortune depicting a woman balancing one legged on a spoke blindfolded, a rather more depressing Fool covering his eyes with his feet firmly on the ground, and a Magician working atop a green cloth laden with Egyptian symbolism. However, as

Doreen Virtue states in the video, this kind of Tarot in particular can be particularly harsh and often quite negative or ‘unsafe’, so take caution and stick to the light.

There are hundreds of other packs floating around in the world today; the Cat People Tarot, Cosmic Tarot, Feng Sui, even gummy bear Tarot (OK so that’s just silly.) Scoping out a pack means letting it come to you – many say, much like a statue of Buddha, you should let it come to you and wait to be given a pack as a gift.

So, despite originating in Renaissance Europe the Tarot has rapidly spread throughout the centuries and has been firmly rooted in the occult and now incorporates anything from angels and fairies, to modern art and Runes. Though one running theme is certain, and that is the theme of archetypes and the facets of the psyche; those many lessons that run through the human experience, and will forever be woven through tale and explained away by mythology that transcends maps.

You’ll Never Live Up to the Standards of...

You’ll never live up to the standards of what “everyone” wants you to be, so why fight a battle you can never win. Instead, focus on being MORE of who you’re meant to be and focus less on what THEY think you should be. You might not see your...
Quote Library