Pirahã, an Indigenous Tribe Living in the Now

I recently came across an indigenous tribe of the Brazilian Amazon, the Pirahã, and they captured my attention. The Pirahãs have a very basic, virtually non-existent numeric system that is not really based on numbers, but uses words to describe quantity.

When you have a tribe or civilization that doesn’t count, it kind of automatically becomes interesting, as it perhaps could lead to a system of more giving and sharing?

Don’t let the lack of numbers or one of the simplest languages in the world draw you away from how capable the Pirahãs are. Their language allows them to have conversations with each other just how we do and even whistle their language to communicate while hunting.

They are talented enough to walk into the forest empty-handed, without clothes, weapons or tools and come back three days later with baskets of fruits, nuts and a small game.

Living in the Amazon, they have mastered the techniques of adapting to their ecosystem, how to avoid animals and even the location and use of important plants. But one of the parts that got me interested in the Pirahãs is how rare it is to come across a tribe that doesn’t believe in God! 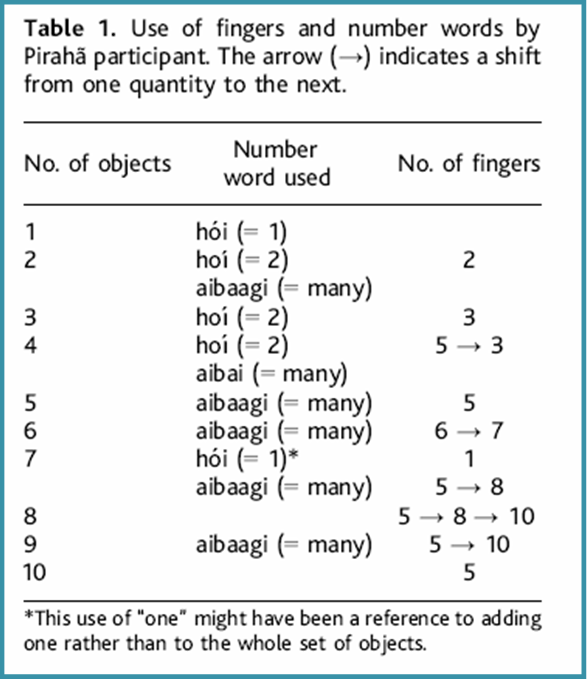 The Pirahã call themselves the Hi’aiti’ihi, roughly translated as ‘the straight ones.’ So what happens when a Christian missionary is on a mission to learn their language to translate the Bible and lead them to God?

Daniel Everette in his book “Don’t Sleep, The are Snakes” talks about how he went into the Amazon with his wife and family with the job of learning the Pirahã language and translating the Bible. What happens next is fascinating, hear it from Daniel himself –

After spending years with the Pirahã, Daniel ends up being influenced by the tribe that lives in the now. He looses his faith in Christianity, becomes an atheist and adopts more than he ever imagined from the Pirahã way of life.

Unlike most religions and tribes the Pirahã don’t appear to have a creation myth explaining existence nor do they have the concept of time, which enables them to live more in the now. When asked more about their beliefs, they simply reply, “Everything is the same, things always are.”

Isn’t the Pirahã tribe fascinating? As per a 2010 census there are 420 members left, my thoughts and love go to all the Amazonian tribes that are being displaced to create dams for hydro-projects when one can harvest the sun’s energy.

I believe indigenous cultures and tribes should be treated with for more respect as they have mastered the way and hold far more knowledge when it comes to living in oneness with our natural ecosystem and themselves.

Shouldn’t they be allowed to live the life they have been living for centuries if they wish to without being displaced?

What Happens When a Language Has No Numbers?
Culture, Not Biology, Shapes Language
The Pirahã Controversy: Numbers
Brazil’s Pirahã Tribe: Living without Numbers or Time
Pirahã People

These savages need god……… lol jk. But seriously, I had a thought last night about just leaving society behind and just starting anew. But the thought is so unfathomable and seems very hard. This is all that they’ve know so I imagine if they were put into our society it would be just as difficult to adapt to our way of like just as it would be hard to give everything up and adapt to their way of life.

what does living in the now have to do with god or a higher power?

These people are living a life they love, and are free from the evil that lurks in our so called civilized society. Let them be free, and let us try and learn from there way of life. They know love, and God is love!!!

Wish the world would have come to the author’s conclusions about indoctrinating others based on our ideas of religion. How different would the world be. Brilliant story

What if They Get Mad at Me?

What if they get mad at me?If people get mad at you for having boundaries, it means they've benefited from you not having any. You don't need to keep people happy every minute of the day. You are not responsible for other people's feelings. If someone has a reaction...
Quote Library