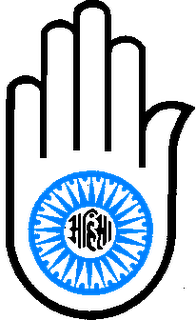 Ahimsa (अहिंसा ahimsā) is a Sanskrit term meaning non-violence, the literal meaning is the avoidance of violence. It is an important part of Hinduism, Jainism, and Buddhism.

The hand with a wheel on the palm symbolizes the Jain Vow of Ahimsa, meaning non-violence. The word in the middle is “ahimsa.” The wheel represents the dharmachakra, to halt the cycle of reincarnation through relentless pursuit of truth.
Hindu Scriptures on Ahimsa:

Non-injury to others (physical or mental) is prescribed as virtue in personal conduct.

Meaning – So many very tiny invisible lifeforms, whose existence can be ascertained by logic only, fill this world, that by mere batting of an eye lid we severe their limbs apart. Although actions such as eating, taking medicines result in some violence, this is unavoidable ahimsa needed for preserving one’s body. As the Bhagavat tells us:

In its Eastern form, the principle of ahimsa was significantly promoted in the West by Mahatma Gandhi. Arguably Gandhi’s non-violence movement may have influenced Western civil rights movements, led by people such as Martin Luther King Jr.

Some of Gandhi’s quotes,

“When I despair, I remember that all through history the way of truth and love has always won. There have been tyrants and murderers and for a time they seem invincible, but in the end, they always fall — think of it, always.”

“An eye for an eye makes the whole world blind.”

Another well known promoter of Ahimsa is Ram Dass, a contemporary spiritual teacher who wrote the 1971 bestseller Be Here Now (Be Here Now is considered by many a manual to make the transition from a psychedelic lifestyle to a yogic lifestyle). He is well-known for his association with Timothy Leary at Harvard University in the early 1960s, both having been dismissed from their professorships for experiments on the effects of psychedelic drugs on human subjects.

After his visit to India where he met Hindu guru Neem Karoli Baba, Ram Dass return to the United States in 1969. He founded several organizations dedicated to expanding spiritual awareness and promoting spiritual growth, including the Hanuman Foundation.

Since then he has embraced a wide variety of spiritual traditions and practices, including guru kripa, bhakti yoga focused on the Hindu spiritual figure Hanuman, meditation in various schools of Buddhism including Theravada, Mahayana, Tibetan, and Zen; karma yoga; and Sufi and Jewish studies.

When asked if he could sum up his life’s message Ram Dass replied, “I help people as a way to work on myself, and I work on myself to help people… To me, that’s what the emerging game is all about.”