“The first language humans had was gestures. There was nothing primitive about this language that flowed from people’s hands, nothing we say now that could not be said in the endless array of movements possible with the fine bones of the fingers and wrists. The gestures were complex and subtle, involving a delicacy of motion that has since been lost completely.” ~ Nicole Krauss

Gesture is a non-verbal form of communication using hands, face or other parts of the body. Psychologically, a gesture is the gateway to understanding one’s state of mind, as individuals can communicate a variety of feelings and thoughts using gestures – affection, love, hostility or anger.

Scientifically, indulging in a few gestures on a regular basis has proved beneficial. The most powerful one of all is the act of smiling genuinely. Research proves the fact that every single time you have a Duchenne smile on your face, there is an outburst of positive hormones in your body. Even exchanging a smile is a universally acceptable gesture.

There are a few gestures, originating from different cultures, that have spiritual and scientific significance.

In this article we will talk about four such hand gestures used to express kindness, love, compassion, empathy and peace. 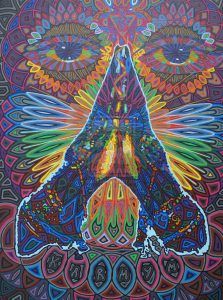 “Namaste,” the common Indian greeting each other, is not merely a way of saying ‘hello,’ but holds a deeper spiritual significance. The act of respectfully joining the palms in front of the chest or the Heart chakra and bowing down of the head, increases the flow of Divine love and reduces one’s ego in the presence of another.

Namaste is a way of saying that the divine in me respects the divine in you. Acknowledging this oneness with the meeting of the palms, we honor the god in the person we meet.

It inculcates the attitude of showing gratitude and reverence for one another. Namaste is also an important mudra in Yoga that helps in staying grounded and humble. This learning of Aloha helps us in coordinating our mind and soul with everyone around you. Shaka is a gesture to acknowledge the beauty of Aloha spirit with kindness, compassion and love.

It is the gesture that teaches us to spread positive feelings among our fellow beings; separation is just an illusion. It can be used as a positive reinforcement.

If somebody did something good or righteous, you can give them a shaka as a sign of approval or praise. The gesture involves extending the thumb and small finger while keeping the three middle fingers curled up and lightly shaking your hand. In popular culture, Shaka is equivalent to “Hakuna Matata” or “No worries”.

Bowing in Japan is a custom of greeting people. Two people stand facing each other and bow from the waist at a certain angle, the back is straight and hands are supposed to be clasped on the sides for men and held in front for women, with the eyes down.

This gesture gives people involved in greeting courage to communicate and work in good spirit. When two people bow to greet each other, a sheath of universal energy is formed around them.

This release of good energy helps in cutting down the negative aura, creating a deep sense of respect for fellow beings and reducing the ego. Generally, the longer and deeper the bow, the stronger the emotion and respect expressed.

Hongi is a traditional greeting of Maoris, the indigenous people of New Zealand. The deeply spiritual Maoris believe that all living beings on Earth are spiritually linked; and no one on Earth is a visitor, we all carry the same universal energy within us. It is done by pressing one’s nose and forehead (at the same time) to another person at an encounter. The ‘hongi’ literally means ‘sharing of breath,’ and by performing this gesture one acknowledges the life force of another being.

“A gesture cannot be regarded as the expression of an individual, as his creation (because no individual is capable of creating a fully original gesture, belonging to nobody else), nor can it even be regarded as that person’s instrument; on the contrary, it is gestures that use us as their instruments, as their bearers and incarnations” ~ Milan Kundera Fascinating – the “Shaka” sign in Hawaiian culture is identical to the American Sign Language verb “play.” …One would think the article would mention this startling fact.

Fascinating – the “Shaka” sign in Hawaiian culture is identical to the American Sign Language verb “play.” …One would think the article would mention this startling fact.

Had to share. Looking back over this past summer session I realized I have done the Namaste gesture with my students. Didn’t know it at the time. This is so special. Thank you for sharing this wonderful information about our body language. The universal language.

“We should go and proclaim without cease and remind people at every step of what we are: that our capacity for self-delusion has no...
Read more