Socially Acceptable Samsara: 4 Examples of Liminality & its Celebration of the Cycles of Life

“During a ritual’s liminal stage, participants “stand at the threshold” between their previous way of structuring their identity, time, or community, and a new way, which the ritual establishes.” Wikipedia’s Definition of Liminality

Small scale rites of passage, most typically of initiation from adolescence into adulthood; Bar Mitzvahs, graduations, weddings, and hundreds of rites of passage and separation, commonly ritualize the cycles of life and represent moments of liminality that most humans at some time or another experience.

This was what inspired Arnold van Gennep to write his work Rites de Passage in 1909, coining the phrase and instigating a whole exploration into a fascination on the subject up into the present day.

These include various stages including ‘preliminal/separation’ rites or a metaphorical death of old habits and ways of functioning where the individual or group stand wavering at the threshold as the fool might at the edge of the cliff.

The ‘liminal/transition rites’ then undertake the body of the ritual. Walking up the aisle for example; reading the vows, sharing a kiss, throwing the confetti… in other words the gradual shift from one mode of being into another.

And finally ‘postliminal/incorporation rites’ where the icing is laid on the cake and the individual or group are ejected back into society in their new form.

A bold and life-giving shock of traumatic events inspires intense moments of liminality where the individual literally may awaken from the sleep their life had amounted to. When grounded to a halt the individual, in their fight-or-flight reaction therefore has a wonderful opportunity laid at their feet – be shaken to the existential core and be reborn… or not.

Having said that, “According to Turner, all liminality must eventually dissolve, for it is a state of great intensity that cannot exist very long without some sort of structure to stabilize it”, so even when presented with such a traumatic event we may still return to stability and normality, though the event will have irrevocably advanced us.

Though liminality can be seen as a space in time that becomes anti-structure and anti-belief where groups operate outside their normal function. Upper and working classes mixing together on a pilgrimage where they’d normally avoid each other for example, or a ritual initiation where the usual rules to do with men and women conversing for example will be momentarily lifted.

The best example of this is probably where natural disaster or war occurs, being both a traumatic event and the following ‘Grand-Scale change’, where all social standing, wealth and ideological beliefs dissolve in the face of our purer humanity. 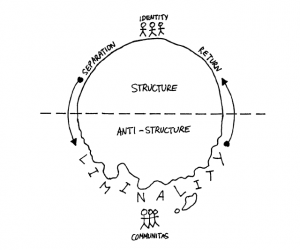 To expand on the previous point, during liminality “social hierarchies may be reversed or temporarily dissolved, continuity of tradition may become uncertain, and future outcomes once taken for granted may be thrown into doubt. The dissolution of order during liminality creates a fluid, malleable situation that enables new institutions and customs to become established.”

Sounds good doesn’t it? Despite the possibility for positive re-jiggling and the re-distribution of power and wealth, liminality or revolutionary periods have been known to spawn meglomanics and some of the most famously dangerous historical figures known today.

Hilter, Stalin and Mussolini, when the collapse of order takes place people often put their trust into someone who seems to have got it together – a trickster – with no emotional ties to the situation and talented in imitation (exciting the crowd and projecting a charismatic persona) who is therefore most definitely not to be trusted and are steeped in the shadow side of the trickster.

These times of political instability are when these individuals usually rise to power… the results as we know can be genocide, famine and of course, war. Tricksters feed on those who (during periods of liminality) fall under mimetic behaviour (behaving, well… like sheep) and are vulnerable as they are less likely to behave rationally, giving way to hysteria and falling prey to the first ‘leader’ who comes along.

To constantly live on the edge or off grid, as a monk or hermit or as a traveler could be seen as living in a constant state of liminality, or at least attempting to be. Gypsies have honoured this way of life for centuries and heralding liminality as a religious pilgrimage and way of life seems to earn the seeker great wisdom as well as a bad name. The individual process of self-realization can be seen as a liminal state; where we withdraw from society to break down the ego and its persona in order to regain a more authentic mode of being. Constantly tripping oneself up as soon as we get comfortable, inviting adventure and consistently challenging ourselves to step beyond the unknown as a way to evolve –

“Individuation can be seen as a “movement through liminal space and time, from disorientation to integration….What takes place in the dark phase of liminality is a process of breaking down…in the interest of “making whole” one’s meaning, purpose and sense of relatedness once more'”. As an archetypal figure, “the trickster is a symbol of the liminal state itself, and of its permanent accessibility as a source of recreative power.”

Shaman of the Liminal

"We balance probabilities and choose the most likely. It is the scientific use of the imagination." ~ Sherlock Holmes One of the most important keys...
Read more