The Path of Two Spirit People in Native American Tribes

Two Spirit is an umbrella term adopted in Winnipeg in 1990 at the First Nations gay and lesbian conference. It refers to people who carry both a masculine and feminine soul. Many indigenous tribes understood that gender and sexuality are diverse and roles for such shouldn’t be as rigid as society deemed.

Before colonization took over and implanted Christian values on our people, the tradition of the Two Spirit was widely accepted and celebrated. In recent decades, there has been a great call to restore these non-binary third and fourth genders.

Long ago, before the Europeans infiltrated North America, 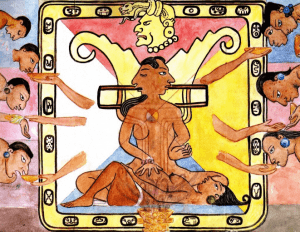 many Native American tribes recognized third and fourth gender individuals. The Natives believed that some were born with the spirits of both man and woman.

Many tribes assigned no restrictions on gender and sexuality and individuals were valued based on their roles among their tribes. Parents did not interfere and dressed their children in gender neutral clothing until such time they decided for themselves and ceremony dictated.

Each tribe had their own words to describe those born with “two spirits”. For instance, the Navajo called them Nadleeh which means : “one in a constant state of change” and the Crow referred to Two Spirits as Bade; meaning “not man, not woman”.

Roles of the Two Spirit people

The role of the Two Spirit people in tribes were highly regarded, as they often became healers, shamans, visionaries and medicine people. They were considered gifted because they embodied both male and female attributes in one body, and could see with the eyes of both genders.

Some tribes held rituals to determine whether a child was Two Spirited and should be raised as such. If the child was seen by their family as behaving differently from their birth gender, they would then set up a ceremony to decide the fate.

One such ritual involved setting a circle of brush and placing within it a man’s bow and a woman’s basket. The child would then be asked to choose which item they would take as the brush was set afire. If the child took the item opposite of his or her biological gender it was considered confirmation. Typically, this ritual took place during the child’s fourth year.

Another ritual that sometimes took place during the preteen years of the male-bodied Two Spirit was set up as a dance circle. Unbeknownst to him, the child would be watched as to whether or not their dancing was considered feminine and thus determined the path to the Two Spirit.

The role of the Two Spirit among their tribe varied. Male-bodied Two Spirited individuals often dressed in female clothing and took on the role of caregiver and nurturer. They would perform typical feminine tasks such as child raising, cooking and sewing.

Likewise, female-bodied Two Spirited people often wore men’s clothing and would hunt. Their gender did not typically dictate their sexuality however many proclaimed as Two Spirit did take a spouse of the same biological sex. All genders were loved and accepted and encouraged by members of the Tribe

Stigmatisation of the Two Spirit People

By the time the Europeans colonized the land, both church and the government deemed those identified as Two Spirits as perverted and non traditional and gender roles were enforced upon them. The word coined then for those outside the gender norm was “Berdache”, which means “kept boy” or “male prostitute”

Because of the shame felt during oppressive situations such as residential schools and marginalization, the rituals and beliefs were eradicated. Instead of honour and respect, Two Spirited people were now cast out of their tribes and commune rejected.

In recent years, as the spectrum of gender and sexuality has broadened and more people are aware that gender is not just binary, the Two Spirit people are speaking out. They wish to reclaim their roles among their tribes and reinstate old traditions and ceremonies.

However, their oppression continues as cultural appropriation rises and non natives declare themselves as Two Spirit. What once was revered among First Nation and Indigenous people, has become somewhat of a joke and mockery.

Through education and awareness of the suffering of these people, perhaps they can again began to thrive in their culture and reclaim the status they once had. They have much to offer, not only their individual tribes and clans but the world as a whole as well.

Jules Ravenheart
Julien Ravenheart is a transman living in Ontario, Canada. A native American on the journey of self discovery through various religious paths, including Shamanism and Buddhism.
Subscribe
Login
0 Comments
Inline Feedbacks
View all comments