The Effect of Meditation on Crime

An experiment in 1993 that has been forgotten was brought to light by the movie What the Bleep do We Know? The excerpt below is taken from that movie, and it got us thinking.

Even the material world around us the chairs, the tables, the rooms,the carpet all of these are nothing but possible movements of consciousness. And I’m choosing moment to moment out of those movements to bring my actual experience into manifestation. This is the only radical thinking that you need to do. But it is so radical It’s so difficult because our tendency is that the world is already out there independent of my experience. It is not. Quantum physics has been so clear about it.

So we are not just observers! Collectively we have the power to bring about changes with just our thoughts! Yes, it has been scientifically validated with the positive effect of meditation on crime. A two-month long transcendental meditation experiment was done in Washington, DC in 1993 to reduce violent crime. In Washington DC, the so-called murder capital of the world there was a big experiment in the summer of 1993 where volunteers came from a hundred countries to collectively meditate for long periods of time throughout the day. It was predicted in advance that with such a sized group you would have a certain percentage drop in violent crime as defined by the F.B.I. in Washington that summer.

Well, the chief of police went on television saying that “Look. It’s gonna take two feet of snow to reduce crime by that percentage in Washington, DC this summer.”

But by the end, the police department became a collaborator and author of this study because the results in fact showed a percentage drop in violent crime in Washington, DC which we could predict on the basis of previous studies that had already been done on a smaller scale. Are people affecting the world of reality that they see?

We wanted to do some research on the effects of meditation on crime, and found these interesting facts. This National Demonstration Project to Reduce Violent Crime and Improve Governmental Effectiveness brought approximately 4,000 participants in the Transcendental Meditation and TM-Sidhi programs to the United States national capital from June 7 to July 30, 1993.

A 27-member independent Project Review Board consisting of sociologists and criminologists from leading universities, representatives from the police department and government monitored its progress. 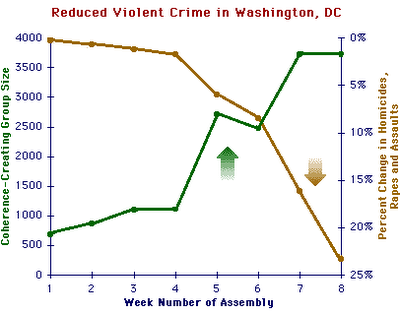 Using time series analysis, violent crimes were analyzed separately in terms of HRA crimes (crimes against the person) and robberies, as well as together. The maximum decrease was 23.3% when the size of the group was largest during the final week of the project.

Based on the results of the study, the steady state gain (long-term effect) associated with a permanent group of 4,000 participants in the Transcendental Meditation and TM-Sidhi programs was calculated as a 48% reduction in HRA crimes in the District of Columbia.

A very interesting experiment that teaches us that each one of us have the power to affect our surroundings in a positive way, you can read the entire experiment report here.

I love this study

MEDITATE ON LORD SHRI RAM NAM AND BE HAPPY ..

Beautiful knowledge and post there – thank you. So much good can and will come from raising consciousness through meditation. Personally my TM practice is a great gift – would love to share that with everyone in the world :). Onwards…

Lovely, interesting that politicians make no use of this research… starting meditation in schools and build up the vibrations in that way…. but if one needs to wait for others, nothing will happen.

this is awesome everyone should try this

“Quantum Mechanics is different. Its weirdness is evident without comparison. It is harder to train your mind to have quantum mechanical tuition, because quantum...

Splinter in the Mind, Part 1: The Nature of Consciousness

“Understand how great is the darkness in which we grope, and never forget the natural-science assumptions with which we started are provisional and revisable...

Consciousness: A Wonderful Coincidence or a Pre-requisite of our Universe?

The fact that there is life is as odd as it is exhilarating. It’s strange because the odds of there being a universe fit...

In my last article, A Layman’s Guide to Mindful Meditation, we discussed the "why” of meditation. In this article we will discuss the “how.”...

Understanding Brainwaves to Expand our Consciousness

The human brain is a complex entity constantly at work, sending electrical signals, communicating, building new neural connections and so on. This electrical activity...

A Neuroscientist Explains the Effect of Meditation on the Brain

A human body has the capacity to heal itself, you only need to be consciously aware about the process and choose the right medium...