Horizons: A Bridge Between Heaven and Earth

“When we look up, it widens our horizons. We see what a little speck we are in the universe, so insignificant, and we all take ourselves so seriously, but in the sky, there are no boundaries. No differences of caste or religion or race.” ~ Julia Gregson

Ever felt so crushed and weighed down by an unknowable feeling of depression or as if your head were so stuffed with so many flies buzzing about up there it felt like a Wall Street crash at the height of panic?

Quite often, the place we live has a much bigger impact on us than we might realize, and the thousand and one layers of electronic messages, the average humming chaos of the human mind; not to mention the historical memories of the land; the wars, times of conflict and invisible scars a place may carry, can often leave us responding to a web of energy that appears to have no place or resonance with our own agenda or the positive energy we desire to manifest.

The feel of the ley lines and the energy the people who inhabit a place collectively carry may have just a big an impact on us when entering or living in a place for a long time, at least as much as the physical appearance and layout does.

Time spent in London or any big city, for example, is likely to crowd and confuse the usually un-spoilt energies we exude compared to time spent in a cabin tottering on a mountainous range that lifts above the usual bickering and mess and tangle of every day life.

There is already much evidence that points to the influence of Wi-fi and other such technological ‘advances’ that are proving to create the most unwelcome ‘God Helmet’ that can cut us off from our primal purity and keep us stuck in the mud and vibrating on the most basic of levels.

In most cases, the poetics of space are not easily changed, or even tapped into until a person gets stuck in a place due to the complicated circumstances that life presents us with. So what to do about it?

In Tibetan Buddhism one such practice utilizes the direction of the gaze during meditation to rectify most moods with the simplest of methods.

As Sogyal Rinpoche suggests ~ “Whenever your mind is wild, it is best to lower your gaze, and whenever it is dull and sleepy, to bring the gaze up.”

So, from this practice we can assume that, even when we are not residing in the clouds, our heads as empty and spacious as the most advanced Buddhist monk we may still catch a glimpse of the resting mind and find a way to clear it. To raise one’s gaze to the horizon, simply by the angle in which your eyes are set can make a huge amount of difference to our clarity of minds.

It is also, as we know from most mainstream religions, the direction from which the divine usually approaches. This type of meditation is also included as Tibetan ‘Phowa’; where the meditator visualizes the deity appearing before them and filling them with their heavenly 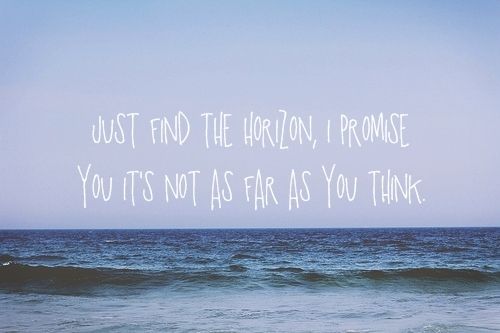 This meditation can be used for those who are dying, but as in The Tibetan Book of Living and Dying can also be a daily practice for oneself; cleansing karma and ‘preparing’ us for our inevitable death, whether it is imminent or not. The deity’s location? A little above the third eye, with the gaze turned up.

Taking raising the gaze a step further, we can also refer to what the author of The Poetics of Space and the lover of French poetry, Gaston Bachelard had to say on the matter of ‘high up places’ and both the direct effect as well as the associations the creative mind has with castles in the sky – ‘the attic is a metaphor for clarity of mind.

The basement, on the contrary, is the darker, subterranean and irrational entity of the house.’ (From The Cultural Studies Review) The attic represents pure rationality in comparison to the irrational basement, the root chakra where the basest of urges passes through…

But say that the horizon – from lack of mountains or hills, canyons or forests – is not located on a raised angle, and in fact the gaze need only look straight ahead to find it? Still a bridge between heaven and earth, the horizon will still create the same effect and is well known throughout literature as a place where the imagination sings.

‘Walking off into the sunset’ has often been used as the final curtain of happy endings, and usually signifies the journey untold, in this world or the next.

And how many times has any one of us experienced shivers down our spine from looking past all present notions at a seemingly endless line stretching out ahead of us; a line signifying the end of an endless road that knows no boundaries, imagining ourselves as the legend of Columbus might’ve, journeying to the unknown.

It is an invitation to oblivion, and a journey that might end where we fall off the edge world, or into another time and space entirely.

Or perhaps that shiver might’ve been induced when we have found no distinction between the two planes; instead seeing them mold into one in an eternal romance, or mirrored to perfection as a bridge over a river, or on a glass-like lake?

The horizon has always been a sight that triggers ancient memories; a timeless image that provokes our dusky souls and connects us to the divine both within and without. Time spent in nature can often simply be spent gazing up at the star-lit sky or hued horizon in order to centre us; to remind us we are an expression of God; that our hearts mirror what we see before us.

The universe resides inside us as well as in the glorious and un-reconstructed scenes that are constantly reborn and play out. The horizon invokes that speechless knowing that time forgot, no matter what square of earth we may be standing on in the present moment.

It is something we can always call on, even in the depths of a concrete jungle, or the height of a Wall-Street-crash.

Lauren
Lauren Simpson-Green, who has had quite a few life-affirming spiritual experiences already, now passes her days trying to master one of the most challenging and rewarding spiritual experiences of all; being a mother to two children. Based in Devon, UK, she spends the rest of her time working on a children's book, practising yoga and making wool fairies and gnomes for her daughter's school fayres.
Subscribe to Our Newsletter!

How Many Times Will we Cross Paths

How many times will we cross paths with a precious soul and wished we knew them sooner. Some souls come and give us this light. They share something beautiful and heartfelt. They share this type of love that's only believed to exist in fantasies and movies. A rare type...
Quote Library

5 Ways to Ensure a Healthy Relationship

How to Polish the Rough Diamond of the Soul