The Seven Archetypes of Human Consciousness

The endless faces of the human psyche become a fascinating playground when it comes to Jungian archetypes. Used in storytelling and psychological methods and dream work, the countless numbers of archetypes provide a framework for the potential paths of the human hero.

Jung outlined that each person should identify and work with twelve main archetypes running through their lives and use them to understand themselves better; their disposition, how the world sees them, and ultimately, their shadow.

Here are 7 particularly transformative ones that can help us to look within. As with our circumstances and past lives, it is best not to associate with one or two in the ego’s need to be labeled, but to recognize that we display all facets within our psyche, whether they’re dormant or active, and that archetypes can embrace the notion that we’re all interdependent; an expression of the same source and the reflection of one another. The Orphan, the Wounded child the Nature, Magical, Divine and Eternal child all lay deep within. We all have an inner child and the type we need to nurture can tell us a lot about what really wrenches at the chambers of our hearts.

The Orphan is the lost child, without a solid identity they have the opportunity to feel deep suffering yet see life for what it is without attachment. Its shadow is its likelihood of becoming the victim, consumed in its loss, much like the Magical child it will assume it will be ‘saved’ and that fate has more strength than its own actions.

The Divine and Eternal child represents the wise master who is already beginning to return home, they are the sages and prophets who have much to teach us and are calm and all knowing from a young age.

When we begin to take these steps towards the light we will find within us a great sense of innocence and the true loving nature of the world, unlike the Orphan who must be street wise and dog eat dog. The Matriarch, Patriarch, King, Queen and Ruler use leadership as a means to express and discover themselves.

How we treat others when handed great power can tell us a lot about ourselves and the storybooks are littered with this archetype: the good and mighty rulers, and the tyrants.

The Ice, White Queen or Witch, represented by the Queen of Swords in the Tarot pack is particularly interesting as well as prevalent and questions our traditional notions of ‘evil.’ A woman who has had her heart broken again and again has become so ‘cold’ that she removes herself from society and becomes isolated in a blizzard-ridden landscape, luring children and followers to ride her chariots through the snow.

She is one who can be found in all of us and calls upon us to melt our hearts and trust again, to reconnect with the hero/ine or Goddess within ourselves and rediscover the positive aspects of the Sacred Feminine of kindness, loving compassion and community. In a way we are all coming in from the cold.

The Jester, Tramp, Joker or Fool’s shadow is those who have become bitter and use their humour to make cruel jibes at those around them. They can be dewy and dim or jackal-like tricksters who invoke the ever-present comedy of life. They call on us to detach from the harsh realities of life and take it with a pinch of salt, often doing so in a seemingly cruel fashion.

They are the masters who have no emotional connections or family but who cause a spark of interest in us and can have a deep impact on us if we meet one. Humour and wit equates power and with this archetype looks can be deceiving.

They also often appear as the everyman and are seldom associated with romance; their path is of a higher calling than love in relationships, they often befriend a child to mirror the innocence and simplicity within themselves.

The Creator, Visionary, Magician and Revolutionary, traditionally very much separate archetypes, have more similarities than you might think. They are the leaders who lead the crowd through their independent thought and ahead-of-their-time ideas. The Magician in the Tarot pack is often one who has mastery over words and the four elements, as is the scientist or inventor.

The Revolutionary is usually more inspired by action, but within this umbrella archetype there can always be found the lone walker who goes against the current, is ridiculed throughout their quest to find their feet and then ultimately followed and revered when finally taken seriously. Passionate and solitary, they are always building; empires, inventions and magical spells, they often blur with the Hermit archetype and can seem more than a little crazy. 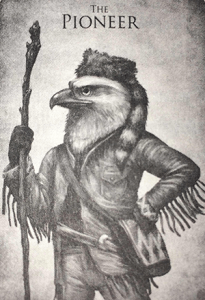 The Explorer in this case I’ve put as the Hero; the individual who leaves home to find themselves, battles monsters and then returns home to slay their own demons. As with all journeys, we travel far from home only to discover that what we were looking for was on our doorstep the whole time.

As with Freud’s Oedipus, we can often be so lured away from home that we become drunk on illusion and make huge mistakes, coming face to face with our worst nightmares and invoking tragic consequences. On the other hand, the plight of the hero is the most exciting and adventurous of the archetypes. We all have the hero and heroine within us and it’s often this role that we are avoiding in the form of our true potential. The Guide, Healer or Teacher is someone to beware when drunk on power. They are the ones who may come with two faces, much like the Politician or Preacher, but unlike them, to the intuitive among us are easy enough to spot.

A true teacher and guru is one who has overcome the many pitfalls of the ego in order to help others in all sincerity.

To practice what one preaches is a great achievement and to awaken others with merely a word is even greater. Stepping aside – having achieved hero status already – in order to lift others up and let them shine is a path that radiates true wisdom and cannot be taken lightly.

In fact it is probably the weightiest responsibility we might take on; carrying others on our shoulders and deflecting a multitude of projections is no easy task. Wanderer, Disciple and Dreamer, the Seeker is one who appears to be wandering aimlessly with no real goal, but in actual fact is the most freed up for spiritual transformation. Unlike the more ostentatious actions of the Hero/Explorer, the Seeker is much more secretive, nomadic, keeping to the hills and quietly inquiring about all walks of life.

To truly be spontaneous and open to danger is where the real adventure begins, and many a seeker can be found in mythological and psychological wisdom. Like Siddhartha by Hesse and many a seemingly ‘lost’ soul it can take great bravery to be completely unattached.

The shadow side may be a student who is constantly schooled and never ejected into the waters of life, but to be constantly learning with a thirst for knowledge more often than not leads us onto the path to enlightenment.

Questioning everything and searching every corner of this world for answers, the Seeker if she/he knows themselves will not fall into the trap of a charlatan Guru but find a true master or be able to eventually master themselves.

Being unattached to earthly desires and distanced from such attachments as family, career and even the pulls of karma, the Seeker often sticks to high places to remain the observer of human nature and steer clear of any obstruction to the divine.

Although this is only a sample of thousands of archetypes that infiltrate the human psyche, it may trigger an interest in you to discover which archetypes are running through your life and which ones you may be inspired to investigate further

Thanks this helps me understand a little more about myself.

I am a Seeker all along. Tnks 4 sharing.

Beautiful piece’s and great work All the best.