Five of the Worst Ways to be an Empath

“The most beautiful people we have known are those who have known defeat, known suffering, known struggle, known loss, and have found their way out of the depths. These persons have an appreciation, a sensitivity, and an understanding of life that fills them with compassion, gentleness, and a deep loving concern. Beautiful people do not just happen.” ~ Elisabeth Kübler-Ross

Having discovered you are to some degree, an empath, and that all those years of thorn tingling feelings and draining encounters really meant something.

Having discovered the reason why you love people yet avoid them at all costs as they make your head spin and have a difficult time building balanced relationships that don’t leave you feeling resentful if not bitter and angry.

You’re probably ready to start confronting those confusing and infuriating emotions by taking action. But first, let’s locate exactly what not to do.

Here’re some of the worst ways to be an empath …

Your chosen path is as an empath, and it will happen whether you like it or not. 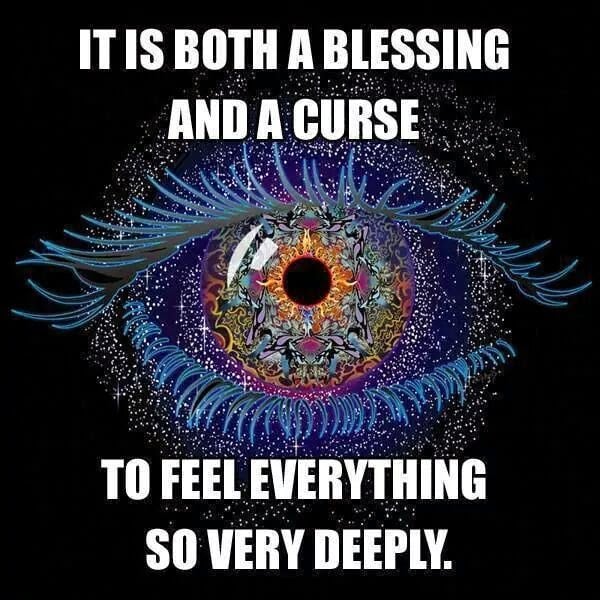 Having been unaware for so long, you may have been dragged through the experience backwards and have accumulated a fair amount of bitterness if not despair about why this keeps happening to you.

Every time you forgive others for their atrocious behaviour, for downright taking advantage and walking all over you, you find that you fall straight back into the trap and spend days and weeks, if not years resenting them (and are secretly angry at yourself for allowing it to happen).

In social situations you soak up everyone else’s shit and willingly take the flak for every little invisible tension or thing that goes wrong, letting others gang up on you and dump all their projections onto you.

You probably do this on a subconscious level in order that everyone is able to enjoy a certain level of comfort or distraction from their own downfalls, that’s detrimental to yourself of course.

You willingly become the victim; letting the hailstorm of emotions swirling around you hit you full force and worst of all… you believe you deserve it. You become the people pleaser, the scapegoat and the fool.

To be honest, the reason that you have become an empath is probably because you have chosen, in this life or beyond, that you would have an intense and probably unpleasant… if not entirely terrifying experience.

These might include the experience of death firsthand (see the Orphan Archetype), a public downfall (killed in a riot, accused of witchcraft), a grand scale or group suffering (war, the atomic bombing of Hiroshima, the sinking of the Titanic) or many other thousands of possibilities that allowed you to experience the height of human suffering.

This might have happened in this lifetime and you’re aware of it, but you must understand that your soul chose to experience it in order to get where you are now.

Feeling like everyone’s enemy is often also the path of the famous as they are more vulnerable and open to negative energy and harmful thoughts against them as well as criticism, doubt and vampirism. Soaking up others emotions on a daily basis is exhausting in itself, but if you are the sort of empath who is a people pleaser, you will also let everyone gang up on you.

You mislead others into thinking you’re a child or emotionally weak in order to relieve those awkward situations and let them dump it all on you. Your low self worth and low self respect lead to this (having decided that you deserve it – victimization), and that cycle of victimization only leads to more exhaustion.

You have become concave, withdrawn, a vacuum of energy and are unable to draw any boundaries. The fact that you chose this path, which means you are stronger than you could ever imagine, makes no difference.

You are completely cut off from your higher self and the divine and have no energy to look at basic daily functions such as looking after yourself and making a living let alone shining your bright light and lifting up others around you (which you have an inkling you should be doing.)

The realization that you feel far from your true path only adds to the exhaustion.

Being totally overwhelmed by the lesson you have chosen, you’ve caved in. You have let people walk all over you for so long, you’ve shut down. Your armor is so thick most people are put off before you even give them a chance to get to know you. You have become so numb and angry that you’ve completely shut the world out.

As sad as it is, the hole isn’t as deep as you think.

People respond to your energy, and as sensitive and sponge-like as you may feel, you have the ability to easily transcend the complex swirls of emotion. Having worked on your boundaries, you are able to lift your head out of the pool and see the bigger picture.

By realizing that you are in complete control and always have been, you are able to stop being the victim and direct your energy from your centre rather than the outside to become the shining light you truly are and do the work you set out to do.

“'The answer to the great question of life, the universe and everything... Is... Forty-two,' said Deep Thought, with infinite majesty and calm.” ~ Douglas...
Read more

I worked my way through all of the levels. It took years to realize my calling as an empath and healer. Once I stopped being everyone’s psychologist and babysitter of their emotional crap, I put on the brakes. I said “Enough. I am better than this. I deserve more. I can do more.” Things did a 180. My energy field grew so much, sensitives feel me before they see me. People still come to me but now I know that it is for emotional or physical healing. Learning to transcend the negative into the positive is the biggest journey and… Read more »

The Empath that you describe in your article is the closest thing I’ve read to describing my life. I would have been speechless had you given answers for those problems because there are no “prescribed” solutions to any of those scenarios you described. Some days it seems easily manageable and then later that week, you’re so ready to give up, cave in! I’m 52 and I’m still only peeling the first layer off of the onion that is my mind, my soul, my higher self. Being this type of Empath can be very dangerous as well. I didn’t realize it… Read more »

What a horridly negative article

Thank you for this. I just started learning more and more about being an empath as I always knew I was “something”. Idk if it sounds weird to anyone but probabaly less then usual on this thread because most of you all are empaths. I struggle with 3 out of 5 things listed and am on my journey to figuring out how to make this work for me personally and for other’s as well. The 2 biggest problems I have are victimization and exhaustion. I take the blame for everything,always trying to excuse other’s decisions or actions on something I… Read more »