Trickster Apocalypse: The Middle Way is Near

Trickster Apocalypse: The Middle is Near

“We’re all fools, all the time. It’s just we’re a different kind each day. We think, I’m not a fool today. I’ve learned my lesson. I was a fool yesterday but not this morning. Then tomorrow we find out that, yes, we were a fool then too. I think the only way we can grow and get on in this world is to accept the fact we’re not perfect and live accordingly.” ~ Ray Bradbury, The Illustrated Man

Down the rabbit hole and through the wormhole. Over the tightrope and across the dreamscape. Beyond the vision of moon-eyed crows and peyote-eyed coyotes. Over cliff-crushed summits and boundary-shattered horizons. Before death, but after life.

There is the shiny apocalypse of Now. It contains all things to such an extent that it’s nothing. It holds so much nothingness that it is everything. It’s so black it’s white. It’s so white it’s black. It’s so much of a smeared-out yin yang that it’s gray; the kind of washed-out gray you get from mixing finitude with infinity. A Middle Gray. A Middle Way. A Golden Ratio so gold it’s Mean.

A Golden Mean blazing in the sky of all things. It’s everywhere to such an extent that it’s nowhere. It’s the frontal lobe of your heart permeating all things. It’s your brain on your sleeve perceiving all nothings. The Middle is near. The middle is here. And so the Trickster Apocalypse begins.

The beginning already began and ended. The ending already ended and began again. The Middle Way is near if you’re beginning to see how all things are connected; it’s already here if you’re on the path and you understand that the journey’s the thing.

Like Carl Jung said, “The pendulum of the mind oscillates between sense and nonsense, not between right and wrong.”

Right and wrong is secondary; healthy and unhealthy is primary; sense and nonsense is exemplary.

What makes sense is to realign ourselves with health. And nothing is healthier than the understanding that all things are connected and that all things change. As it turns out, there’s more to being human than choice; there’s vicissitude.

Healthy, progressive evolution is a process, and process requires movement. It requires forward, uncertain momentum; not fixed and certain stagnation. Like Farrah Gray pinpointed, “Comfort is the enemy of achievement.” Indeed, it’s the struggle against discomfort and too much comfort that keeps the wheels spinning; that prevents the spearhead from getting dull and maintains its momentum.

Like Albert Einstein said, “To keep your balance, you must keep moving.”

Nothing moves more smoothly through the ether of the human condition than trickster energy. It’s the epitome of “movement.” It’s the essence of balance, striking at the heart of the Middle Way. It sounds the bells of the Golden Ratio and rides its gelded waves into a sacred resonance with all things. And so there is as much to say about nonsense as there is to say about sense.

Like the un-doctor (Dr. Seuss) himself said: “Nonsense wakes up the brain cells. And it helps develop a sense of humor, which is awfully important in this day and age. Humor has a tremendous place in this sordid world. It’s more than just a matter of laughing. If you can see things out of whack, then you can see how things can be in whack.” And that’s the whole point of the Trickster Apocalypse: laughter through wisdom and the achievement of high humor. It forces us to notice the blazing sign left behind by Carl Sagan, which simply reads: “Somewhere something incredible is waiting to be known.”

Live where your fear is. Sabotage status and build character instead. Don’t be what people expect you to be. Be a force of nature first, a person second. Be infamous. Be an amoral agent. Instead of trying to possess Truth; let yourself be possessed by it.

Like Rumi said, “Don’t listen too often to the comforting part of the self that gives you what you want. Pray instead for a tough instructor. Nothing less than the radical disassembling of what we’ve wanted and gotten, and what we still wish for, allows us to discover the value of true being that lies underneath.” 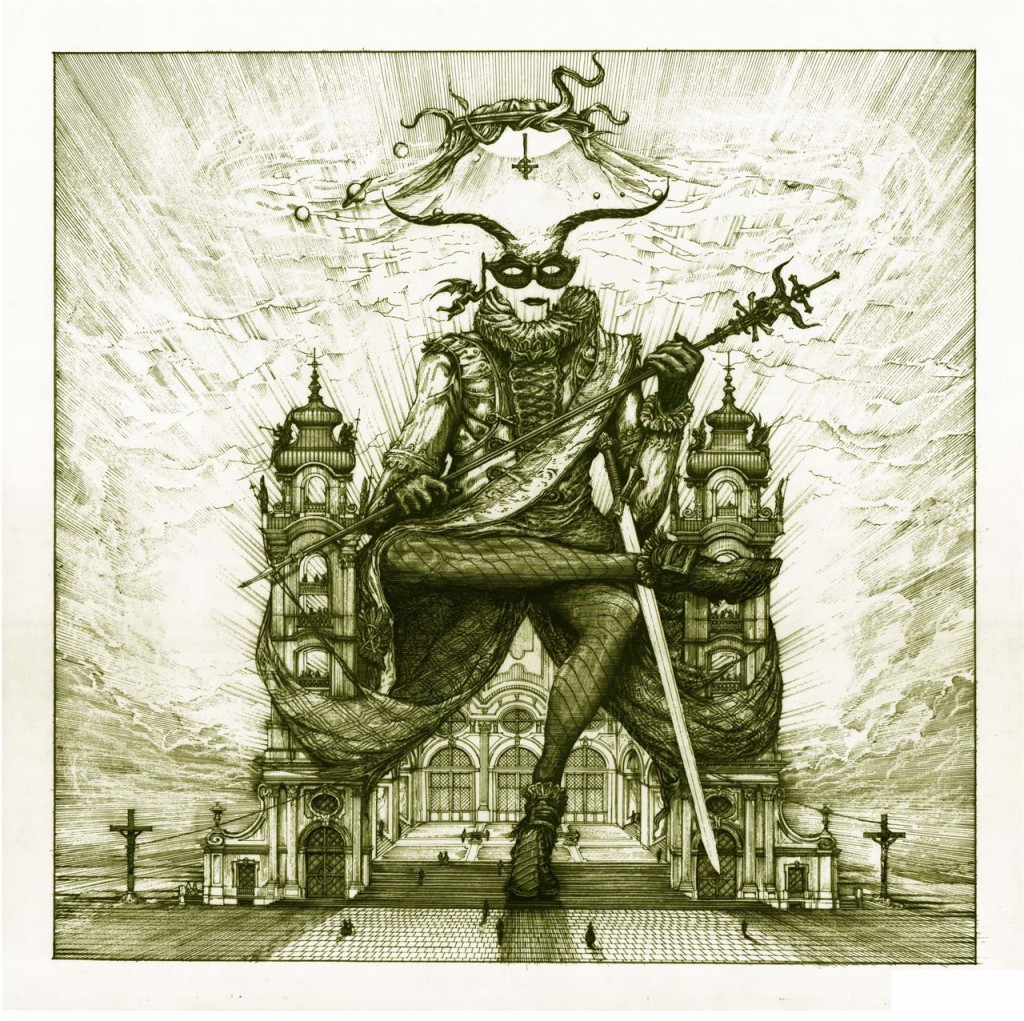 Stand on the edge of the human condition. Stare into the abyss. Take the Middle Way, like the double-edged sword that it is, and plunge it into your hungry heart. Do it until it hurts like hell. Do it until you feel – not know, feel– the pulsing nothingness of infinity pressing against the finite somethingness of your soul.

Then laugh, and laugh hard, at the terribly beautiful cosmic joke of it all; at the wonderfully bleak infinite jest of being a finite being bashing its finitude against an infinite reality. Laugh until it hurts. Then keep laughing until it feels good. That’s the trickster’s secret: laugh at the cosmic joke lest you remain the butt-end of it.

The kind of love that embraces fallibility, insecurity, and imperfection, and then dares to square the circle of the finite human condition with the infinite cosmic condition. The kind of all-powerful love that only the trickster energy of the Middle Way can unleash, flayed bare in the blood and bone shop of the world, our hearts broken open in the Desert of the Real, our compass leaking out its magnetism. It’s okay. Let them break. Let them leak. A heart that is broken open, and remains broken open, is a heart alert to its calling.

Likewise, a soul that is sharpened, and remains sharpened, is a soul capable of a humor of the most high.

Sharpen it on the flint-stone of your pain, on the sandstone of your fear, on the philosopher’s stone of your existential angst. Hone it until it is sharp enough to cut God, whatsoever or whomsoever that god may be: deity, queen, government, money, any and all perceived authorities.

The trickster apocalypse is the guillotine of God. It’s the art of chopping off godheads and then planting seeds filled with curled up question-marks inside the fertile neck stumps. It’s the epitome of contrarianism, an assault of radical thinking against the unthinking majority.

The trickster apocalypse is the Middle Way personified. It’s the Golden Mean incarnate. It’s the Golden Ratio self-actualized. It’s you fine-tuning your mind and calibrating your soul so as to dance harmoniously with cosmic frequencies, and then calling it “play.”

Sacred play. The sacred art of a sacred dance played out between nature and the human soul on the Dance Floor of Time. The ability to make revolutionary art in order to propel history forward.

The ability to confront the world as it is, and then dream radically about how it could be different.

Like the activist poet Lawrence Ferlinghetti said, “If you would be a poet, create works capable of answering the challenges of apocalyptic times.”

Indeed, Art itself (the trickster’s medium, if ever there was one) may not be able to change the world, but it can inspire those who will.

Once again nailed it to the heart.Namaste!

that was awesome. clarity of your words..

I Thank you for these words… They Define My MAdness…

After enjoying the experience of deep and profound cosmic catapult last night every word every emotion and every epiphany in this piece sang out loud to the gaping openness of my heart. Thank you.

Navigating Reality One of the most difficult things for the awakening Empath to understand is Ego and how Ego aspects can be managed and understood...