Elevator to Nirvana: The Path of Paradox

“Make no mistake about it – enlightenment is a destructive process. It has nothing to do with becoming better or being happier. Enlightenment is the crumbling away of untruth. It’s seeing through the facade of pretense. It’s the complete eradication of everything we imagined to be true.” ~ Adyashanti

When it comes to tapping the Philosopher’s stone of Truth, there’s more than one way to get a red-pill fix despite being surrounded by blue-pill-popping deception-junkies. Between ‘real’ and ‘unreal’ there is a third thing: imagination, metamorphosis, a mighty bridge of transubstantiation.

As Anthony de Mello said, “You have to understand, my dears, that the shortest distance between truth and a human being is a story.”

So allow me to pull you into a story. Imagine you are Ernest Becker’s Cosmic Hero, a new flavor of hero courageously and imaginatively spiraling out, using Infinite Player tactics despite the finite play of the status quo. Imagine you are Nietzsche’s Overman (Übermensch), the one who constantly overcomes the illusion of the Self.

Imagine this, and then imagine a mysterious elevator appearing out of nowhere in front of you (think: rabbit hole, swallowing the red pill, call to adventure). Now dare yourself to step into it.

“Perhaps no one has yet been truthful enough about what “truthfulness” is.” ~ Nietzsche

Imagine the elevator whisking you to the center of the universe, into a black hole so gargantuan it subsumes the universe at every “point.” The walls of the elevator disintegrate. Black empty space becomes your platform. A being appears in front of you drinking a cup of coffee calling himself Mad Allsgood, followed by a long line of pet quails he refers to as “Qualia Quails” that trail behind him into infinity.

He is the Holographic Man, and you cannot help but listen intently as he explains to you the difference between perceptual reality (phenomenal) and actual reality (noumenal):

The only reason the concept of infinity seems paradoxical is because consciousness itself is paradoxical. Reality is just fine being as infinite as it is. Infinity is the natural order of reality. It is conscious observation that is finite and thus paradoxical… Oh! Pardon me. I forgot to ask if you’d like a cup of Qualia coffee. I guarantee it will taste different to you than it does to me. Cheers!”…

When it comes down to it, Truth is not a destination but a journey. Such a journey requires flexibility and adaptability in the moment. Stability is achieved by embracing change. Balance is attained through the union of opposites.

Truth is neither here nor there, but somewhere jut out of reach. Truth is not some finished fact laid out neatly by the universe just waiting for us to discover it.

Truth is an instrument designed by human beings as they interact in a psychosocial environment within a greater anthropomorphized cosmos. Human truth will always be seen through a human bias. There’s simply no way to know what’s really true or not without human observation muddling it up.

As Carl Sagan simply put it, “Science’s only sacred truth is that there are no sacred truths.”

But that’s not to say that some aspects of Truth cannot be found. This is why imagination is more powerful than knowledge. Things change. Yesterday’s truth can become today’s psychological hang-up.

Truth-as-certitude may very well be the ultimate Red Herring. But revolutionary ideas put such notions of Truth into checkmate. Coming at the current “truth” from different angles, transforms established thought into radicalized thought.

As Jose Ortega y Gasset cryptically stated, “The man who discovers a new scientific truth has previously had to smash to atoms almost everything he had learned, and arrives at the new truth with hands bloodstained from the slaughter of a thousand platitudes.”

As you both sip your Qualia coffee, the Holographic Man keeps referring to you as Zeno. You try to tell him that your name is not Zeno, but he’s simply not having it.

“It is understandable,” he says, “that you should be more inclined to believe what your memory and your senses are telling you, than what quantum experiments, Cantor’s theorem, Godel’s Incompleteness theorem, Heisenberg’s uncertainty principle, Schrodinger’s equation, and Zeno’s paradoxes are telling you (imperceptible noumenal).

After all, you are in love with your own perception. Indeed, perception is your reality (perceptual phenomenal), but as history and science has shown, time and time again, assumptions based upon perception and common sense alone are usually wrong.

Nevertheless, your name may or may not be Zeno, but according to my perception, and for our purposes here, your name is Zeno. More specifically you are Zeno’s Arrow. But, then again, so am I. And not only are we both humanized Zeno-arrows moving/not moving infinitely through “time” and “space” in an infinite circle (straight line), we’re also both inside Gabriel’s Trumpet which is being sounded inside Hilbert’s Infinite Hotel.

And here, in my hand, behold the almighty so-called tiniest “length” the Planck Length. Bare witness as I cut it in half into smaller and smaller “lengths,” ad infinitum.”…

It turns out that the center of the universe is everywhere, fractal: infinity within a finite space. The length of a true fractal always diverges to infinity. Imagining yourself as Zeno’s Arrow flying through “time” and “space” is a powerful way to see how Motion is real perceptually, but illusory actually. You come to realize that notions of Time and Space are human created constructs relative to finite moments of perceptual time.

Even the Planck Length is a human creation that the universe has no obligation to adhere to. You are both infinite (actually) and finite (perceptually). Between notions of finitude and infinity there is a quantum field of smeared out reality where you exist as both everything and nothing, at the same time that you exist as You seemingly separate from everything else. Mind boggling indeed.

This leads to absurdity, but such is life for a finite brain perceiving an infinite reality. As Albert Camus said, “The absurd hero’s refusal to hope becomes his singular ability to live in the present with passion.” And his/her refusal to hope leads to self-liberation. 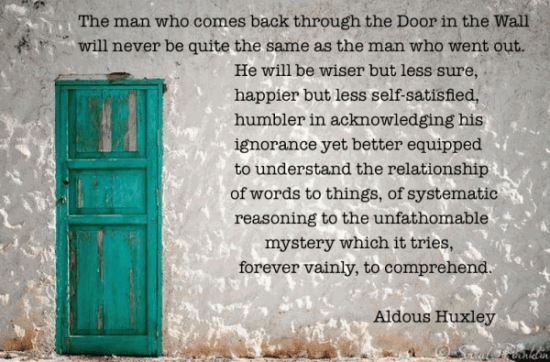 “In my experience, everyone will say they want to discover the Truth, right up until they realize that the Truth will rob them of their deepest held ideas, beliefs, hopes, and dreams. The freedom of enlightenment means much more than the experience of love and peace.

It means discovering a Truth that will turn your view of self and life upside-down. For one who is truly ready, this will be unimaginably liberating. But for one who is still clinging in any way, this will be extremely challenging indeed. How does one know if they are ready? One is ready when they are willing to be absolutely consumed, when they are willing to be fuel for a fire without end.” ~ Adyashanti

“It means everything.” He says. “But it also means nothing. When it really comes down to it, it’s your responsibility alone to bring meaning to it all. Such is the power of human imagination: the ability to create meaning within inherently meaningless constructs. Are you bound by cosmic laws? Sure you are. Are you bound by the laws of nature? Of course. But within that seemingly finite construct is an infinite cosmos with which to play.

In the end there is neither infinity nor finitude, but conscious observation makes it so. Which is all the more reason to Play.

Like Sir Isaac Newton said, “To myself I am only a child playing on the beach, while vast oceans of truth lie undiscovered before me.”

And here we are, only the beach turns out to be an infinite fractal (or not, upon observation), and we are infinitely fascinated by it (or not).

Energy Movement : How to Tune in and Understand its Flow

Before you Argue with Someone

Before you argue with someone, ask yourself, is that person even mentally mature enough to grasp the concept of different perspectives? Because if not, there's absolutely no point.~ Amber Veal⠀
Quote Library