Ten Quotes That Will Shatter Your Beliefs

“Quotations are like wayside robbers who leap out, brandishing weapons, and relieve the idler of his certainty.” ~ Walter Benjamin

Ah quotations, those little packets of redemption, those tiny bundles of emancipation. They take our tiny bowls of fixed thinking and stir them up into giant bowls of flexible thinking. They eclipse both certitude and uncertainty, intermittently. They intellectually crush out.

In this article we’ll delve into ten quotations that tear the veil between the believer and his/her belief. Ten quotes that rattle the cage of our certainty, tease out the hypocrisy of our convictions, and force our heads over the edge of the abyss of the human condition.

As Bradford Keeney pinpointed, “Words are only useful in teasing one another. In teasing we are less likely to get stuck in any particular belief, attitude, or form of knowing.”

But it does get us out of our own way, so that we’re able to focus on what really matters: life, love, and laughter. As, Jorge Luis Borges said, polishing up the predicament, “To fall in love is to create a religion that has a fallible god.” As Elie Weisel said, “Every question possesses a power that does not lie within the answer.” Of course! In the end all one has are questions with which to challenge the lot; to usurp the throne it’s intellections, and make assumptions naught.

And then there’s Franz Kafka’s thought on the subject that knocks it out of the park, “He who does not answer the questions has passed the test.”

Such a thought keeps us open to new evidence, new arguments, and new experiences, so that we may perhaps evolve, or co-evolve, into having a healthier perspective of reality. We’re able to move from thesis to anti-thesis and into synthesis, and then back into thesis, to which a new anti-thesis becomes inevitable.

Lest we doom ourselves to making the same mistakes as our ancestors did, it behooves us to intuit when an antiquated ideal has grown unhealthy and stale. As Aldous Huxley warned, rounding out the thought, “That men do not learn very much from the lessons of history is the most important of all the lessons that history has to teach.” “You must change in order to find your truest self. And keep changing. The false idol is any form that hangs around too long and gets fossilized. It’s worth considering that if your ideas of God don’t change, then your ideas are dead. God is not dead. He simply went elsewhere because you were too boring… Tease God. Do not fear God. A fool’s love is what God loves best. It represents the ready and available heart of a child at play.” ~ Bradford Keeney

Barring the idea that everything is an illusion, ‘change’ is perhaps the only certainty we have to hang our hats on. It seems to be the only permanent. Which is ironic, because change is the epitome of impermanence. Oh well.

Might as well have a good sense of humor about it. Better to laugh with all the gods (and with the absence of god, if you’re an atheist) than to stare all self-serious and dead-mackerel-eyed into the infinite nothingness vainly tempting to force-feed “Truth” into a reality that doesn’t give a rat’s as*.

Alan Watts smooths out the thought, “Man suffers only because he takes seriously what the gods made for fun.”

Such is the existential predicament of mankind: a breath-gasping, sphincter-tightening, mortal beast daring his soul into transcending it all with the self-actualized symbolism of God. Either way, man is God and God is man.

Especially considering Meister Eckhart’s thought on the subject, “The eye with which I see God, is the same eye with which God sees me.” Or? As Rumi said, “Maybe you are searching among the branches for what only appears in the roots.” Truth shrinks or expands in proportion to one’s ability to hold multiple conflicting dispositions at the same time regarding the same topic. In short: Truth is a slippery red herring. In order to handle it, the mind must be both flexible and sharp, all while not taking itself too seriously.

This requires being circumspect with ideas while also attempting to sharpen them on the whetstone of probability. And then having the audacity to be circumspect with probability. Perhaps nobody said it better than Aristotle, “It is the mark of an educated mind to entertain a thought without accepting it.”

Indeed. “I don’t know” frees us into a state of “prepared to learn.” We are liberated from the burden of having the answers. We shed the weight, so that maybe we can pack it back up in a healthier way that makes us more robust. We unlearn what we have learned.

Then we shed the weight again, back into a state of “I don’t know.” We empty the cup, so that we can fill it back up with the fresh water of awe and wonder. Then we empty it again. Over and over. Education by perpetual astonishment is the thing. ‘I don’t know’ in order that I may be overwhelmed by my not knowing. 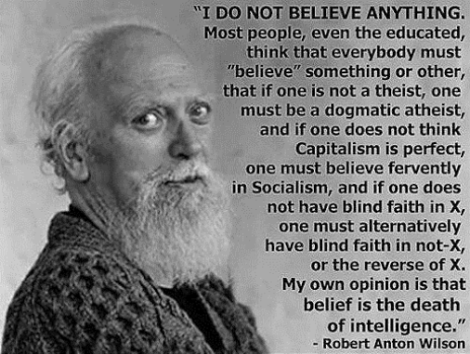 “The easy confidence with which I know another man’s religion is folly teaches me to suspect that my own is also.” ~ Mark Twain

If, as Voltaire said, “Religion began when the first conman met the first fool,” then perhaps the fool gets un-fooled by realizing that the conman is just a man – fallible, flawed, imperfect, prone to mistakes, and more than likely just as wrong about his assertions as the fool is about his uncertainty.

The absolute folly of the human condition is the only salvation for the fool, if only he could intuit it. But alas, as Mark Twain surmised, “It’s easier to fool people than to convince them that they have been fooled.”

“If you would be a real seeker after truth, it is necessary that at least once in your life you doubt, as far as possible, all things.” ~ Rene Descartes

Just as the folly of the human condition is the only salvation for the fool, so too is doubt the only salvation for the blindly faithful. And the predicament is much the same. How to get the blindly faithful passed their blind spot. It comes down to a problem of cognitive dissonance that’s exacerbated by people’s tendency to take themselves and their beliefs too seriously.

But breakthroughs can be made. We just need to trip our ignorant religious tendencies into an enlightened spiritual dance. As Eckhart Tolle suggested, “Here is a new spiritual practice: Don’t take your thoughts too seriously.” “But the worst enemy you can meet will always be yourself; you lie in wait for yourself in caverns and forests. Lonely one, you are going the way to yourself! And your way goes past yourself, and past your seven devils! You will be a heretic to yourself and witch and soothsayer and fool and doubter and unholy one and villain. You must be ready to burn yourself in your own flame: how could you become new, if you had not first become ashes?” ~ Friedrich Nietzsche