7 Ways to Heal Your Sacral Chakra

The root chakra provides the foundation on which we build our lives, and the second chakra or Swadhishthana, is the hub of our creativity, guiding us to our dreams and desires. Swadhisthana a meaning to ‘Her own abode’, where ‘her’ refers to the Kundalini Energy, the Sacral Chakra is the center of sexuality, fertility, and an expression of one’s being.

The orange wheel of energy lies two to three inches below the abdomen, associated with the Pelvic Floor region. Also, satisfaction and pleasure are few of the important aspects of Svadhishthana and if the energy is in deficit or contracted, the feeling of gratification, joy, and pleasure might always seems elusive. 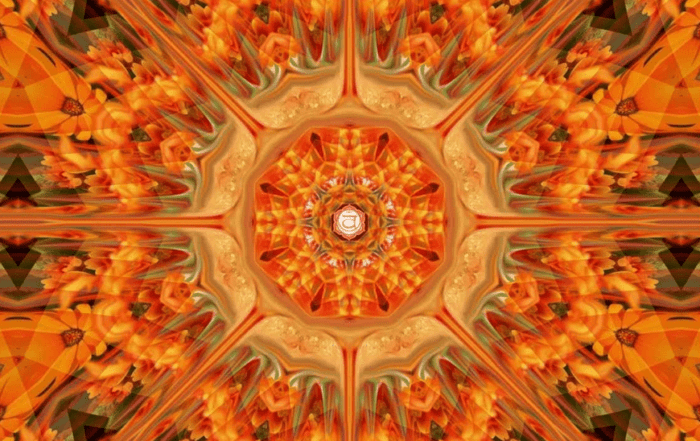 1) The sacral chakra, also referred to as sexual chakra governs the sexual organs, ovaries/testicles, bladder, bowel and lower intestine. In case the chakra is overactive, over indulgence in sex and lust might overpower the person.

This not only affects the physical health because appropriate amounts of sexual hormones are responsible for liveliness and vitality of the body, but also hampers the spiritual growth. Similarly, an underactive chakra leads to little or no sex drive.

2) Satisfaction and contentment are yet another defining characteristics of this chakra. For example, the person wants to be happy and he or she does something that might make them joyful. But since this chakra is repressed, the person might not experience a sense of satisfaction.

Now a craving sets in to feel happiness and the person keeps on indulging and overindulging in the same action to only taste guilt in the end. Yet another dire consequence of the same is addiction of a particular act in the quest to achieve happiness.

3) Depression, self-doubt, and emotional insatiability are some of the other symptoms of an imbalanced sacral chakra.

Since it is also the emotional center, a blocked sacral chakra leads to emotional instability, lack of excitement, depression, and sticking to one set of people or habits can be observed as well. On the contrary, if the chakra is overactive, the person can be emotionally absorbed, overambitious, aggressive, or possessive.

4) Aging is also a factor controlled by the second chakra. Douglas De Long in his book Ancient techniques for beginners: Auras, Chakras, Angels, Rebirth, Astral Projection said, “On a physical level, this energy center is connected to the pancreas…It releases certain digestive enzymes, which when properly balanced, can slow the human aging process.”

5) The desire to reproduce is also related to this chakra. Reproductive organ disorders, impotency, or infertility can be a cause of an underactive chakra while premature ejaculation or excessive libido are signs of an overactive chakra.

People who lack creativity, feel unmotivated, and tend to overthink are some of the other symptoms of sacral chakra imbalance.

Ways to heal the Sacral Chakra

Osho’s Dynamic meditation is an effective technique to clear out the energy centres. Its an intense way to break from ingrained patterns and experience freedom and peace that is buried under all the negative thoughts forms and emotions.


It starts by expressing anger or pent up emotions by breathing chaotically, followed by an expression of repressed feelings by dancing, crying, jumping, singing etc. and then chanting ‘Hooo’, which hits the sexual center of the body. After this cathartic experience, the practitioner eventually drifts into a meditative state.

Different colors and sizes of crystals have different abilities and power. Every crystal is directed to activate certain energy center.

Crystals associated with this chakra are Orange Calcite, Jasper, Orange Aventurine, Amber, Snowflake Obsidian, etc. Before using, know the state of the chakra, whether it is overactive or underactive and use the crystals accordingly.

The Beej Mantra of Sacral Chakra is ‘VAM’. During meditation, the practitioner is advised to bring awareness to this energy center and chant ‘VAM’ three times followed by ‘OM’ three times. The process can be continued for a few minutes and then followed by regular meditation.

Shakti Chalana Mudra can be used to stimulate and calm the pelvic region. This is also the mudra of Goddess Durga and offers strength to the body, releases tension from the pelvic region and calms the muscles. You can use this mudra while meditating or simply perform it throughout the day.

Bring both the hands in front of you and join the tips of the ring and little finger. Fold the index and middle finger with fingertips touching the base of the palm and the thumbs placed in between these fingers. Join the knuckles. Stay in this mudra while meditating and feel the energy flowing freely in your sacral chakra.

Some daily actions can be used to stimulate or balance the second chakra. Joining a creative hobby like painting, photography, pottery, etc. activates the sacral chakra. Also, use herbs and oils to induce a sense of relaxation. Ginger, turmeric, and garlic are a few warming herbs and can be helpful in creating balance.

Having a daily yoga practice is a boon for all the chakras and not just one. Some of the poses that directly help this chakra are Virasana, Half Moon Pose, Goddess Pose, Half Monkey Pose, Wide legged standing, Forward Bending Poses, Reclining Bound Angle Pose, Warrior Pose, etc.

Essential oils, just like crystals, are designed to overcome specific issues and problems. For Sacral Chakra, use Sandalwood, Ylang Ylang oil, Tangerine Oil, Geranium oil or Mandarin oil. Simply put few drops on a cotton bud and inhale it or use it in diffusers by adding a few drops of this oil. You can also add a few drops to bathing water and light orange color candles to enhance the effect.

Have a look at this video of Tibetan Bowls and Solfeggio frequency chakra healing sound.

Practicing these few simple techniques can help you in more than one way. A healthy body,  increased quality of life, inner contentment are few of the direct benefits of a balanced Sacral Chakra.

Sonali Bansal
A healer, yoga teacher, traveler & philanthropist, she is an independent writer/blogger. A creative soul, her inner calling lies in spiritual oneness. Overcoming the hurdles of human birth, she is a karma yogini. Channeling the light wherever she goes, her focus is on self development as this is the real art of divine worship for her. Follow her page on: https://www.facebook.com/yogictransfusion
Subscribe to Our Newsletter!

And the People Stayed Home. And Read Books,...

And the people stayed home. And read books, and listened, and rested, and exercised, and made art, and played games, and learned new ways of being, and were still. And listened more deeply. Some meditated, some prayed, some danced. Some met their shadows. And the people began to think...
Quote Library

The Inner Critic: Making Friends with that Little Voice in your Head