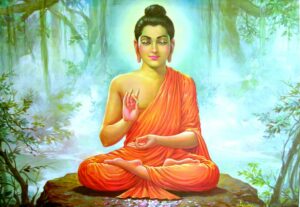 Once there was a man rowing a boat down a river. Someone on the shore warned him, “Stop rowing so gaily down the swift current; there are rapids ahead and a dangerous whirlpool, and there are crocodiles and demons lying in wait in rocky caverns. You will perish if you continue.”

In this short parable, “the swift current” is a life of lust; “rowing gaily” is giving rein to one’s passion, “rapids ahead” means the ensuing suffering and pain; “whirlpool” means pleasure, “crocodiles and demons’ refers to the decay and death that follow a life of lust and indulgence; “Someone on the shore,” who calls out, is Buddha.

In another allegory, a man who committed a crime is running away with some guards following him. So he tries to hide himself by descending into a well by means of some vines growing down the sides. As he descends he sees vipers at the bottom of the well, so he decides to clung to the vine for safety. After a time when his arms are getting tired, he notices two mice, one white and the other black, gnawing at the vine.

If the vine breaks, he will fall to the vipers and perish. Suddenly, on looking upwards, he notices just above his face a bee hive from which occasionally falls a drop of honey. The man, forgetting all his dangers, tastes the honey with delight.

“A man” means the one who is born to suffer and to die alone. “Guards” and “vipers” refer to the body with all its desires. “Vines” means the continuity of human life. “Two mice, one white and the other black” refer to the duration of time, days and nights, and the passing years. “Honey” indicates the physical pleasures that beguiles the suffering of the passing years.


Here is the last parable and one that is quite interesting, a king places four vipers in a box and gives the box into the safekeeping of a servant. He commands the servant to take good care of them and warns if he angers even one of them he will be punished with death. The servant, in fear, decides to throw away the box and escape.

The king sends five guards to capture the servant. At first they approach the servant in a friendly manner, intending to take him back safely, but the servant does not trust their friendliness and escapes to another village.

Then, in a vision, a voice tells him that in this village there is no safe shelter, and that there are six bandits who will attack him, so the servant runs away in fright until he comes to a wild river that blocks his way. Thinking of the dangers that are following him, he makes a raft and succeeds in crossing the turbulent current, beyond which he finally finds safety and peace.

“Four vipers in a box” indicate the four elements of earth, water, fire and air that make up the body of flesh. The body is given into the charge of lust and is an enemy of the mind. Therefore, he tries to run away from the body.

“Five guards who approach in a friendly manner” are the five aggregates, form, feeling, perception, volition and consciousness that frame the body and mind. “The safe shelter” is the six senses, which are no safe shelter after all, and “the six bandits” are the six objects of the six senses. Thus, seeing the dangers within the six senses, he runs away once more and comes to the wild current of worldly desires.

Then he makes himself a raft of the Buddha’s good teachings and crosses the wild current safely.

I found this video on youtube from IndiaJiva, from their album, ‘Universal Mother’, this is Buddhist Chant, Nam Myoho Renge Kyo. Chant along and experience the bliss!

The parables have been taken from, The Teachings of Buddha ~ Bukkyo Dendo Kyokai.

Sometimes We Just Have to Cut Off Dead...

Sometimes we just have to cut off dead branches in our life. Sometimes that's the only way we can keep the tree alive. It's hard and it hurts, but it's what's best.~ Nicole Williams
Quote Library