Organic compounds, known to be present in space, are found in meteorites. The majority of biologists agree that life probably has evolved elsewhere in the cosmos. Francis Crick — who co-discovered the structure of the DNA molecule — thought it’s possible that life may have arrived on Earth as the result of ‘directed panspermia,’ a deliberate attempt to transport microorganisms to seed life on other planets, by an older, more advanced species from a distant star system.

Even the discovery of ‘extremophiles‘ — organisms that live in extremely harsh environments that would kill most other organisms — have increased speculations about the possibility of extraterrestrial life. Recent discoveries of life living miles under the Earth in utter darkness, or in ice, or even in boiling water, tell us: Whatever is possible in nature tends to become realized. If a function needs to be realized, a form takes shape to do so. My personal view is that almost everything happens in our universe that is not forbidden by the laws of physics and chemistry, if one puts in the effort to discern those dynamic laws. Life on Earth can thrive in unimaginably harsh conditions, even in acid or within solid rock. On the ocean ﬂoor, bacteria thrive in scalding, mineral-laden hot springs. If microbes thrive in such miserable conditions on our planet, where else beyond similar life-forms might exist? 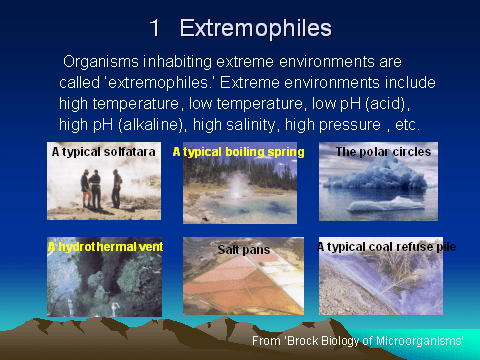 Clifford Pickover said “Extraterrestrial microbes may be as close as the planets in our own solar system. Some of the strongest evidence of extraterrestrial life came in 1996, when a meteorite was discovered that contained the ﬁrst organic molecules thought to be of Martian origin; several mineral features characteristic of biological activity; and possible microscopic fossils of a primitive, bacteria-like organism that may have lived on Mars more than 3.6 billion years ago. If it’s true that life has evolved elsewhere in the universe, how much of this life is intelligent?”

There are over 10 billion stars in our galaxy, and if only one-tenth of 1 percent of those have planets with the right conditions for life, then there are 10 million suitable planets in our galaxy, the milky way, alone. According to the calculations of astrophysicist Frank Drake, there may be as many as ten thousand advanced extraterrestrial civilizations in our Milky Way galaxy, and there are at least a billion other galaxies out there. The discovery of a single extraterrestrial civilization holds the power to cause us to entirely re-evaluate ourselves and our position in the universe. But if this is true, then where are they?


Given that the universe is so vast, with so many stars that must have planets like ours, why aren’t ﬂying saucers all over the place setting up little shops to deal with us? We must have something that they’d think was cool, and yet it just doesn’t seem to be the case. If it is, they’re not making themselves known. Maybe its their response to our materialist game.

However, Pulitzer Prize-winning, Harvard psychiatrist John Mack takes seriously the reports that aliens were abducting human beings for the purpose of study and experimentation.

He described how a substantial number of credible and mentally sound people he has worked with claim to have been abducted by otherworldly visitors — taken aboard strange crafts in a beam of light and subjected to intrusive medical exams by small, spindly-limbed, gray-skinned beings, with large pear-shaped heads and big black almond-shaped eyes. Sounds mawkish, but we must never underestimate the power in belief systems and faith.

The evidence that Mack presents for this unexplained phenomenon is truly compelling, as there is a great deal of similarity in the details of the accounts that the “abductees” give. It is very difﬁcult for a thoughtful person to examine the evidence and not look up into the sky and wonder about the truth of these claims. Perhaps even more far-out is the claim that an alien super-intelligence is accessible to human beings in special states of consciousness. Even though Terence McKenna mockingly referred to the supposed beings behind the alien abduction phenomena as “the pro bono proctologists from Zeta Reticuli,” he believed that an advanced extraterrestrial intelligence had arrived on our planet long ago, encoded inside the spores of hallucinogenic (psilocybin) mushrooms. By consuming the mind-expanding mushrooms in a shamanic context, he believed, one could telepathically communicate with these ancient alien beings.

I’ve spoken with dozens of people who have ingested this hyper-dimensional fungus and share McKenna’s and other shaman’s quasi belief that such a discourse is indeed possible and even very likely in a natural setting. Contact with an intelligent extraterrestrial mind could have extremely profound effects on our understanding of consciousness.

Popular science ﬁction ﬁlms such as Star Wars, Independence Day, Contact, and Close encounters of the Third Kind reveal how we have always been at once both frightened and fascinated with the possibility of extraterrestrial contact.

If we make physical contact with an intelligent species of extraterrestrials, what would they think of us, and what would we have in common with them? Assuming that we could ﬁnd a way to communicate with them, what would we talk about? Would we be talking or using telepathy? How would contact with an advanced extraterrestrial civilization inﬂuence our ideas about science, politics, art, and religion? Questions like this help us to understand ourselves better and develop a less species-centric, inter-dimensional point of view. Could this increase our chances of human initiated contact.

To understand the mind and culture of an advanced extraterrestrial species, we need to ﬁrst consider that an alien brain and nervous system, which evolved under conditions very different from Earth, may experience states of consciousness that are completely incompatible to our own.

It is also possible that interstellar travel itself, with its spectacular views of the heavens and the weightless environment of space, may allow for the evolution of new states of consciousness in otherworldly species as well as in ourselves.

Some interesting books on Extraterrestrial Evolution and the Human race

The Intent Beneath the Sirius Documentary

Good article. Just a helpful note: there are at least 200 billion stars in the milky way galaxy (ours), and uncounted trillions of galaxies in the universe. So the statistical chances of life are much higher even than stated in this article. Much love.

We should believe that alien life can thrive in extreme conditions. Those conditions will be extreme for us, may be suitable for them . They may have totally different type of dna structure.. Also i read some discussion somewhere that, most of the alien pictures ,drawings so far we have created matches somewhat with the human body structure, So there is a possibility that they are creatures of this planet itself , living 1000s or millions of years ahead of us and coming back to visit us with.. may be some sort of time machine stuff..

Here's the thing, most of us are so caught up with the day-to-day routine that we hardly make time for ourselves. One of the...
Read more