4 Ways to Harness the Courage to Overgrow the System

Even the people we care about the most may still be hooked on the outdated system, so it also requires loving compassion, but definitely not pacifism or pity. We should be sympathetic with their plight, but not to the extent that we let them off the hook for not being responsible with their power.

As it stands, the current system is the main force that’s causing the environmental destruction and social issues that we are tackling today. Being bold in the face of that destruction is the height of courage in our day and age.

So here are four ways to go about harnessing that courage and overgrowing the system.

“The revolution begins at home. If you overthrow yourself again and again, you might earn the right to overthrow the rest of us.” ~ Rob Brezsny

Make do with what you have and overgrow yourself every single day until you’re the walking personification of Camus’ liberating quote “The only way to deal with an unfree world is to become so absolutely free that your very existence is an act of rebellion,” and then overgrow yourself again.

Keep doing it, over and over. Don’t stop. The world needs more people who are so absolutely free that their very existence is an act of rebellion.

Feed your body healthy food. Feed your brain healthy thoughts. Feed your soul healthy doses of “can do!” Then wrap it all up by feeding your mind body and soul with healthy mindful meditation. Before you know it you’ll be an expert at overgrowing yourself and then you will be in a place where you can make a difference by overgrowing the system.

“The earth provides enough to satisfy every man’s needs, but not every man’s greed.” ~ Gandhi

The way we overgrow such a system is by giving back through radical generosity. Stop whining, “Me! Me! Me!” and start declaring: “We!” After all, we empower each other. So let’s transform borders into centers for healthy dialogue. Let’s embrace the core tenants of permaculture: care for the earth, care for the people, return of surplus.

Find out whatever it is that you are good at and then gift that back to your community. And if you’re someone who has more than you need, expiate your wealth. It’s what I call capital munificence, the expiation and reciprocity of wealth with emphasis on holistic and eco-moral compassion.

Tear down the culturally conditioned false ideal of greed. Recondition your conditioned reflex to own things. You don’t own anything. You’re borrowing it, at best. Overcoming the ownership-based culture and adapting a relationship-based approach will get you everywhere closer to overgrowing the system.

3) Be carefree rather than careless

Be lighthearted, not troubled. Be happy-go-lucky, not anxious. Be optimistic, not pessimistic. And if you are troubled, anxious, and/or pessimistic, then be proactive about assuaging whatever it is that is causing you to feel that way.

There are ways to be both carefree and proactive: by growing a garden instead of a lawn, by writing what you’re passionate about instead of what you’re told to, by speaking truth to power, by liberating the unliberated. Having a relaxed cheerful disposition rather than a thoughtless inconsiderate one, is a great way to lead by example and overgrow the system. 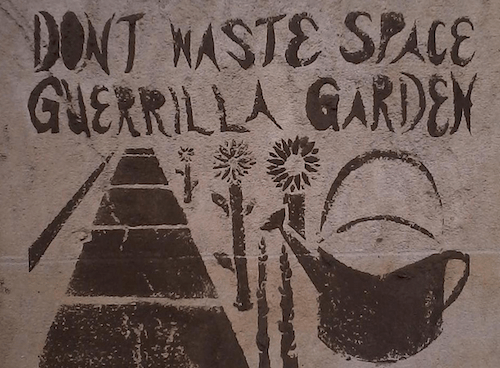 And the more proactive we are about being lighthearted the more likely we are to soften the hardhearted. You can choose to sit in perpetual sadness, immobilized by the gravity of the system, or you can rise up with a full heart and push back.

So be nonchalant with your passion, especially in the face of tyranny. Be insouciant with your love, the rest of the world will just have to adapt. Be a shining light, as bright as the sun, that way the people you shine your light upon will, like blossoming seeds, feel liberated to overgrow their bounds.

Are you still caught up in the outdated, parochial paradigm of the system? Do you feel like there is no way out, that you’re caught in the quagmire of wakeup, work, watch TV, and sleep? Well I have news for you, there is a way out. It’s called Art.

Probably the best way to overgrow the system is through free artistic self-expression. If the system is suppressing you and turning you into a slave, overgrow it by responding with good art. When the shit hits the fan, make good art out of it, like Jackson Pollack splattering paint on a wall.

That’s why Neil Gaiman and I are emphasizing “good” art. There’s a reason why Hitler seized more than 16,000 works of art. Art is inherently insurgent. Art is extremely political. It plants seeds that the powers-that-be are afraid will someday grow to overthrow their power. And so it is today, the system fears art that paints it in an unhealthy, unsustainable light.

But it is immensely unhealthy and unsustainable so, rebel artists the world over, I beseech you, paint your hearts out and overgrow the system.

Gary Z McGee
Gary 'Z' McGee, a former Navy Intelligence Specialist turned philosopher, is the author of Birthday Suit of God and The Looking Glass Man. His works are inspired by the great philosophers of the ages and his wide awake view of the modern world.
Subscribe to Our Newsletter!

Do the Things you Used to Talk About...

Do the things you used to talk about doing but never did. Know when to let go and when to hold on tight. Stop rushing. Don't be intimidated to say it like it is. Stop apologizing all the time. Learn to say no, so your yes has some oomph....
Quote Library

Easter Island and Us

Reality is Nothing but a Hallucination Says a Neuroscientist