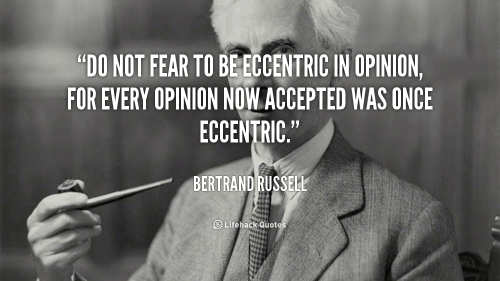 Widely held to be one of the 20th century’s premier logicians, Bertrand Russell was a British philosopher, mathematician, historian and political activist par excellence. More importantly, he was a profound and original teacher.

His philosophy of religion in particular was a heavy influence on such modern champions of philosophy as Christopher Hitchens, Daniel Dennett, and Richard Dawkins. As a teacher, it was his wish to promulgate the following Liberal Decalogue as a vision for the responsibilities of a good teacher. Let’s break them down, shall we.

1.) Do not feel absolutely certain of anything

“Uncertainty is so terrible that we often seek to be rid of it, at the hazard of a certain mischief.” ~ Edmund Burke

Russell would probably be the first to declare that there is wisdom in uncertainty. Absolute certainty gets you nowhere but stuck. Sure, certainty is comfortable, but it is also stagnant, boring, and leads to intellectual inertia.

Even worse, it tends to propagate close-mindedness. Uncertainty is far superior, because then at least truth is allowed to grow and change with the passage of time. Instead of believing in things, take things into consideration.

It is quite simple to alter considerations. But it’s almost impossible to alter beliefs. caveat credentis, believer beware.

Like Gerry Spence said, “I’d rather have a mind open by wonder than one closed by belief.”

Knowledge of truth should never be seen as a given, but as a gift; a gift gleaned not as a certainty but as a proper humility in the face of what we think we know. Knowledge is as much subject to vicissitude as anything else. Seek not certainty, but absolute uncertainty. 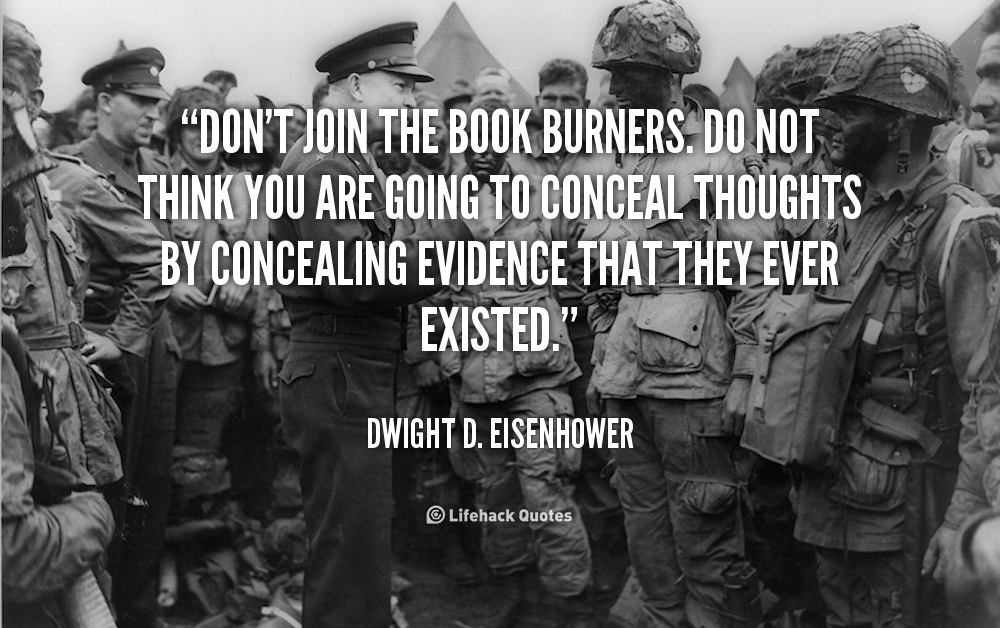 2.) Do not think it worthwhile to proceed by concealing evidence

“In religion and politics people’s beliefs and convictions are in almost every case gotten at second-hand, and without examination, from authorities who have not themselves examined the questions at issue but have taken them at second-hand from other non-examiners, whose opinions about them were not worth a brass farthing.” ~ Mark Twain

The evidence is sure to come to light anyway, so you might as well help to reveal it rather than seek to conceal it. Concealing evidence now just makes you look like a fool later. If you’re not the one to reveal the truth, then it will be someone else eventually anyway, so it might as well be you now, even if it goes against your current agenda.

Guard against the conviction that seeks to suppress facts. Turn the tables by consistently and ruthlessly questioning such convictions. Above all, cultivate a good sense of humor in the face of a bad sense of honor. 3.) Never try to discourage thinking for you are sure to succeed

“The secret of freedom lies in educating people, whereas the secret in tyranny is in keeping them ignorant.” ~ Maximilien Robespierre

A good teacher always wants their students to think for themselves, even if that means such thinking might extinguish some of the teacher’s power. This is because true teachers do not seek to create followers, they seek to create leaders. And oh the absolute joy that is discovered when a student becomes a teacher.

4.) When you meet with opposition, endeavor to overcome it by argument and not by authority

“An optimist mindset finds dozens of possible solutions for every problem that the pessimist regards as incurable.” ~ Robert Anton Wilson

A victory dependent upon authority is unreal and illusory. A victory interdependent upon a good argument is authentic and sincere. And a dialectical exchange that arrives at the “truth” through logical discourse is even better.

There is always something more to learn when opposition is met with open argumentation rather than closed off authority. Authoritarianism doesn’t teach anything. It is inconsiderate, and has no respect for the opposition.

Argumentation, on the other hand, teaches respect and compassion toward the opposition. Strive toward compassionate argumentation rather than unfeeling authority when it comes to disagreement and conflict.

5.) Have no respect for the authority of others

“Unhealthy social conformity is nothing other than self-sabotage.” ~ Mike Bundrant There are always contrary authorities to be found. Everybody wants to be an authority. But not everybody’s authority is based upon actual reality. Guard against irrational authority by questioning all authority. Instead of having respect for the authority of others, try making fun of it instead. Poke holes in it. Laugh at it. Mock its supposed power.

6.) Do not use power to suppress opinions you think pernicious

“When one tugs at a single thing in nature, he finds it attached to the rest of the world.” ~ John Muir

If you use power to suppress what you perceive to be harmful or destructive opinions, then those opinions will eventually suppress you. This ties-in with not discouraging thinking (#3). When you suppress the opinions of others, be they malign or benign, you indirectly suppress yourself. This is because everything is connected. Opinions that challenge our power should be subsumed rather than suppressed, for what they can teach us is far greater than what they can destroy. If the challenging opinion is not subsumed early enough then it will eventually undermine our power.

Pernicious opinions will always be a thorn in our side unless we can learn what they have to teach us. They should never be suppressed lest they return as a suppressor.

7.) Do not fear to be eccentric in opinion

“I awoke only to find that the rest of the world was still asleep.” ~ Leonardo Da Vinci

Every opinion now accepted was once eccentric. Surely people thought Da Vinci’s opinions were eccentric when they were first conceived, or Copernicus’, or Einstein’s. But so what? Original opinions will always seem strange at first. Have them anyway.

Don’t be afraid to rock the boat with your ideas. Your opinion might be the one that tips us into the next phase of human evolution. So be eccentric. Be extravagant. Be boisterous.

What makes you eccentric makes you valuable, especially in a world of conformist sheep. Wow the masses. Be the electric eel in an ocean of guppies. No fear, only the ability to change it into something worthwhile.

8.) Find more pleasure in intelligent dissent than in passive agreement

“I’d rather die of passion than of boredom.” ~ Vincent Van Gogh The world is filled with people who just passively agree with the system because it’s the easy thing to do. Billions of people the world over are obediently complying with an unhealthy, unsustainable mode of human governance. The problem is that this leads to intellectual laziness on a mass scale. It leads to myopic sycophants. It leads to followers instead of leaders.

Rational discord in the face of irrational “order” compels the system to balance itself. The pleasure gained from such balance is invaluable.

9.) Be scrupulously truthful, even if the truth is inconvenient

“The intellectual is and only can be a militant, engaged as a singularity among others, embarked on the project of co-research aimed at making the multitude. The intellectual is thus not ‘out in front’ to determine the movements of history or ‘on the sidelines’ to critique them but rather completely ‘inside.’” ~Antonio Negri & Michael Hardt Don’t kiss people with lies. Slap people with the truth. The truth is more inconvenient when you try to conceal it anyway. So reveal it instead. An inconvenient truth, no matter how much it hurts, is always better than a convenient lie, no matter how much it feels good. Honesty is almost always the best policy. People will usually respect painful honesty over soothing dishonesty, even if it doesn’t seem so at first.

Guard against cognitive dissonance by talking about it directly and by having a good sense of humor about it. Be the “singularity among others” by planting meticulous seeds of well thought out, conscientious truthfulness.

Indeed, even just one strategically planted seed of truth has the potential to change the world for the better.

10.) Do not feel envious of the happiness of those who live in a fool’s paradise

“Maybe you are searching among the branches for what only appears in the roots.” ~ Rumi Only a fool would think that was happiness anyway. A billion people who appear to be happy about living an unhealthy lifestyle, is still just a billion unhealthy people who have mistaken convenience and comfort for happiness. Don’t give into the hype.

The envy that you feel, if you feel it at all, is a false envy. A fool’s paradise is any kind of unsustainable, unhealthy, violent, stupid, immoral, greedy, corrupt, or mass-destructive social system.

Those who live in such a system and claim to be happy are ignorant fools. There’s more honor in rattling their cages than envying their bars. It’s nobler to attempt to wake them up than to wish you were still asleep.

Don’t be Cypher, cowardly wishing he had taken the blue pill of comfortable deception. Be Neo, courageously accepting the pain that comes with having taken the red pill of truth.

thats great and resonance dances in my innerst. thank you.

thats great and resonance dances in my innerst. thank you.

“Russell visited the Soviet Union and met Lenin in 1920. In a tract, ‘The Practice and Theory of Bolshevism,’ he wrote: ‘I believe that Communism is necessary to the world.” I saw an interview where Russell advocated the mass killing of the infirm and unable to work, an early communist ideal… It was horrific to watch him say this. I had admired the man. Suffice it to say, Russell was wrong about this singular idea.

Honestly THAT was much better than what number 5 says. I understand you are saying essentially the same thing, but it’s the wording. Stated much better in response to my comment than in the article. I respect you “sticking to your guns” though.

It’s a Funny Thing About Life