Five Ways You Can Become a Better God

Here’s the thing: you are God. But here’s the other thing: so am I. So is everyone. Some of us are simply more aware of it than others. The more aware you become of this fact, the better god you will become. Sound simple? It’s not.

It takes a riot of the imagination, a tempest of the spirit, a hurricane of the heart. It takes an insurgence of the soul that recapitulates the history of the human condition itself and then dares to reinterpret it. In short, it takes remapping the human spirit in order to balance it with the greater map of the planet.

Here are five ways to become more aware of your divine godhood, and thus, how to become a better god. The Great Mystery is the grand, all-consuming, everything-nothingness of Reality. It’s the dancing, bouncing, hungry, almighty void of all things moving inside and out, inverted and outverted, micro and macro; going through the motions of being interdependently infinite within finite chunks of infinite timelines within a greater capital “I” Infinity that is also a capital “N” Nothingness. And here’s the really cool part: you are a vital part of this magnificence.

Indeed, this is actually who you are. This is who you have always been. This is who you will always be. Since the beginning of there-is-no-such-thing-as-a-beginning you have been a force of nature that can neither be destroyed nor created only transformed. This is neither science nor magic, it’s both: a sacred resonance.

The sooner you come to terms with the absolute fact that you are a mind-bogglingly unique aspect of this universe going through infinite change, the sooner you will become a balancing agent for the redistribution of healthy energy. The sooner you will learn how to transform in healthier ways.

The less aware you are of this fact, the more likely you are to become an unbalanced agent for the spreading of unhealthy energy. All gods have the power to use their power in either healthy or unhealthy ways. It’s a great power that requires an even greater responsibility. An important part of becoming a better god is recognizing and honoring the existence of other divine beings going through similarly unique manifestations of the universal construct. Being mindful of other gods will give you the vital ability of compassion. One simply cannot be an efficient god if one does not have the ability to place oneself in another god’s shoes, and to feel the fitted (or ill-fitted) dimensions of being “other-than-oneself.”

Empathy is a healthy god’s modus operandi for higher consciousness, as it directly taps one into the collective unconscious. You want to become a better god? Become more adept at adapting to others. Become a force of loving kindness and tolerance, especially in the face of hateful resentment and intolerance.

Be a force of ruthless love as opposed to a force of passive indifference. Your courage will have a resonating effect on those who are open to it, while keeping those who are closed to it on their toes. 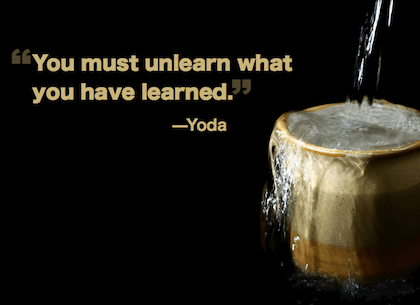 “The first step toward success is taken when you refuse to be a captive of the environment in which you first find yourself.” ~ Mark Caine

All gods begin as tiny godlings conditioned by a godless world. We overcome such conditioning by reconditioning the original condition, so as to become an unconditional force of nature. We transcend codependency and independency by focusing more on being an interdependent being in a relationship with an interconnected cosmos.

Being mindful of how everything is connected is essential to becoming a better god, especially in a universe where everything is attached to everything else. Being a better god is being in tune with this invisible connection. The more in tune we become, the more adept we get at listening to the “language older than words” that’s reverberating between all things.

Listening to this sacred language launches us into a higher state of consciousness where we are able to “feel” our way between the elusive cracks of the right-wrong/moral-immoral/healthy-unhealthy paradox of being a seemingly independent god in an interdependent universe.

But it’s in this higher state of cosmic consciousness where we realize that independence is an illusion and our unconditional powers of courage and love ultimately manifest.

“Humility is as much the opposite of self-abasement as it is of self-exaltation. To be humble is not to make comparisons. It is in this sense that humility is absolute self-effacement.” ~ Mahatma Gandhi

Focus more on being a force of nature than on being an individual. Understand that being human is secondary to the primary experience of being a vital aspect of the cosmos. Doing so all at once humbles the ego while it also magnifies your self-worth. It expands your spiritual power while also contracting your tendency toward egoism. It transforms us from ego-unconscious individuals into eco-conscious beings who are capable of resonating with an interconnected world. You want to become a better god? Trump small-mind with big-mind. Outmaneuver small-picture thinking with big-picture thinking.

Connect the dots instead of merely being a whiny, woe-is-me dot lost in the bigger picture. Better yet, use your ego –the magnificent tool that it is– to leverage eco-centric thinking against the ego-centric world. Use the instrument of your ego as a cataclysmic catalyst of healthy sustainable change in an otherwise unhealthy unsustainable world.

5.) Get in touch with your vast array of sub-selves

“Poetry is an echo, asking a shadow to dance.” ~ Carl Sandburg

An important part of becoming a better god is being able to dance between opposites: between shadow and light, finite and infinite, ignorance and wisdom. Being a healthy god requires balance, and not only between self and other, or self and cosmos, but between self and self. Confused? Good. Being a better god means being more and more confused, as the more you learn, the more you realize how much there is still to learn.

But I digress, balancing self with self is coming to terms with the fact that the self is made up of a plethora of sub-selves, and is ultimately an illusion in its self (pun intended). But that’s okay.

That’s part of why being a god is so much fun. Illusion of self aside, these multiple sub-selves are constantly at play with or against each other, sometimes conscious, sometimes subconscious, but mostly unconscious (also blending in and out of the collective unconscious), they weave in and out of different states of self-reflection, echoing eternally through the never-ending Cave of Selfhood and eventually coming out the “other side” in the form of the universe itself.

You are probably only aware of a precious few of these sub-selves, and you probably cling to them with much eagerness and earnestness, impatient and fearful of having them contested. But contest them you must, in order to become a better god.

One of the most effective ways of contesting them is to get in touch with your inner-feminine or inner-masculine (anima/animus), arguably the most important sub-selves of them all.

At the end of the day, being a better god is simply having fun with the illusion while also not losing sight of the overall interdependent dance. Namaste: the god within me recognizes and honors the god within you.

Self-existent
Are you God?
Namaste
Eco-prayer
You alone are god

You have it. Well done.

Do you have a brief outlay of Why we are one? I am a bit stunted by how the relation works, if its in the “atoms”, then the bigger construct are determining it’s parts. But if its in the structure, the whole is defined by the parts. So I was wondering whether you have considered this, and what your take on this short comment is. Now I argue for monism, but the interplay within is still possible by opposites. I am also considering if existence would even be possible without polarity. I am working with a model of how to… Read more »

Do you have a brief outlay of Why we are one? I am a bit stunted by how the relation works, if its in the “atoms”, then the bigger construct are determining it’s parts. But if its in the structure, the whole is defined by the parts. So I was wondering whether you have considered this, and what your take on this short comment is. Now I argue for monism, but the interplay within is still possible by opposites. I am also considering if existence would even be possible without polarity. I am working with a model of how to… Read more »