7 Signs You May Be an Enlightened Rebel

Ah, the rebel, the misfit, the eccentric, the nonconformist. So misunderstood and yet so vital for human flourishing.

There are many types of rebels: revolutionaries, troublemakers, provocateurs, free spirits, mavericks, outsiders, outlaws, reformers, even shadow rebels. They all have different characteristics and follow different patterns, but they all fall under the rebel archetype.

Here are seven signs you may be an enlightened rebel…

“If you follow the crowd, you will likely get no further than the crowd. If you walk alone, you’re likely to end up in places no one has ever been before. You can dissolve into the main stream, or you can choose to become an achiever and be distinct. To be distinct, you must be different. To be different, you must strive to be what no one else but you can be.” ~ Alan Ashley-Pitt

You save your precious rebellious energy for times of true injustice. Otherwise, you respect the paths of others even though your own path may be vastly different, realizing that variety is the spice of life and that diversity is the key to healthy progressive evolution.

You don’t follow the crowd, but you respect the freedom of the individuals in the crowd. You realize that in order to be free, they must also be free. Although you always rebel against crowds, you only physically rebel against individuals if they violate the non-aggression principle. In such cases, you will always rebel in self-defense and in defense of Freedom itself.

You’ve always been able to rebel just for rebellions sake. But as an enlightened rebel, you tend to only intellectually/spiritually rebel against others who attempt to pigeonhole your unique philosophy into outdated constructs.

2) You are drawn to the unorthodox and unique, but you’ve gone Meta

“Nature is busy creating absolutely unique individuals, whereas culture has invented a single mold to which all must conform. It is grotesque.” ~ U. G. Krishnamurti

But you’ve gone to the next level. You don’t rebel to find answers, but to maintain the vitality of questions. You rebel in order to keep the cycle going. To sustain the Infinite game of Life. Some call it “entering the flow state,” or “being in the zone.” Modern day rebels call it “going Meta.”

Going Meta is seeing the big picture. It’s connecting the dots that most people aren’t even aware are there, and then rearranging them to keep things fresh. It is third-eye illumination and visionary insight.

As Robert Greene said in The 48 Laws of Power, “In the land of the two-eyed, the third eye gives you the omniscience of a god. You see further than others, and you see deeper.”

“Chaos, leave me never. Keep me wild and keep me free so that my brokenness will be the only beauty the world will see.” ~ R. M. Drake As an enlightened rebel, you stand as a beacon of adventure for those trapped inside tiny comfort zones. You are the one planting curious seeds and swapping out blue pills for red pills.

You’re the one flashing revolutionary ideas that shatter mental paradigms, push envelopes, and flatten boxes. You’re the one showing how boundaries can be transformed into horizons. You are the one reaching out your hand to the downhearted, saying, “Get dressed, we’re going on an adventure.”

4) You transform fear into fuel for the fire

“She conquered her demons and wore her scars like wings.” ~ Atticus

Your practiced rebellion has taught you that fear is fuel. You don’t ignore fear. You don’t suppress it. You embrace it. You wrestle with it. You understand it. Then you use it as fuel for further rebellion. It becomes a self-propelling force. It becomes courage.

You are able to transform this courage into further courage, continuing to use fear as fuel the whole way. Fear turned fuel turned courage turned higher courage.

But you don’t stop there. You use it on purpose and with purpose. Daring yourself to confront your demons. Further daring yourself to transform those demons into diamonds. In this way, your proactive rebellion becomes vital medicine toward self-improvement despite self-preservation.

“All courses of action are risky, so prudence is not in avoiding danger but calculating risk and acting decisively. Make mistakes of ambition and not mistakes of sloth. Develop the strength to do bold things, not the strength to suffer.” ~ Niccolo Machiavelli You are proficient with the art of high humor, knowing that the only way to get power over power is through the higher power of a good sense of humor. As such, you are able to turn the tables on so called authority. You are able to flip the script, especially regarding entrenched power that has overreached itself.

You’ve found that high humor leads to high courage and the audacity to speak truth to power. And you do so with silver-tongued proficiency.

There exists no perceived construct of power that’s above your enlightened rebellion. No idol too golden. No high horse too high. No pedestal too revered. No “wizard” too disguised. No God too godly. No title too contrived.

Nothing is immune to the exactness of your rebellion. It’s all merely procrastinating compost anyway. It’s all just well-arranged dust. It’s all an illusion within a delusion. And you have the enlightened sense of humor to reveal that absolute fact.

6) You are an agent for healthy change through progressive evolution

As a rebellious agent for healthy change, you realize that questions are vital for progressive evolution. When a so-called answer becomes too conservative, you are the one to question it. Lest it become entrenched, old-fashioned, or outdated. Lest it become orthodoxy, you are the one willing to challenge it with unorthodoxy. Even if that means looking like a fool.

The result is a self-correcting matrix – Mother Nature. As an agent for healthy change, you realize that you must be a force of nature first, a human second. This way, no single way becomes the only way.

Regressive or stagnant devolution is averted. Diversity is maintained so that creativity and imagination can be utilized toward further and further progressive evolution.

“The true focus of revolutionary change is never merely the oppressive situations which we seek to escape, but that piece of the oppressor which is planted deep within each of us.” ~ Audre Lorde 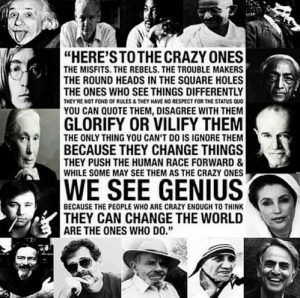 You understand that tyranny begins within. It begins with your own tyrannical ego trying to control everything. Either you transform your rigid tyrannical ego into a flexible self-actualized ego, or you will forever remain a tool to it.

But if you are able to turn the tables on your ego, to self-overcome, then your ego becomes your tool. It becomes a leveraging device that prevents the self from falling into complacency, stagnation, or regression.

You stop trying to control everything and you learn how to surrender to both order and chaos in healthier and healthier ways. At the end of the day, you realize that the ultimate form of rebellion is rebellion against the self through proactive self-overcoming.

an Enlightened rebel
Everyone needs a friend…
Dragon quote