“When the Sacred Masculine is combined with the sacred feminine inside each of us, we create the ‘sacred marriage’ of compassion and passion in ourselves.” ~ Matthew Fox

The age of armored masculinity is dead and dying at our feet. It’s a bloody tangle of weaponry and bloated egos glued together by myopic one-upmanship and congealed rage.

But buried in the rot and decay are the seeds of a new way of being a man in this world, a reawakening of our awareness of the sacred brought on by the reemergence of the divine feminine. No amount of armor can suppress it. No amount of weaponry can keep it at bay.

The New Shiva is growing robust and powerful alongside the New Shakti. The world may not be ready for this New Man to emerge, but emerge he must, if we are to continue living on a planet which is demanding that a healthier more sustainable man appear.

In the same way that both men and women have a feminine aspect, so too do both genders have a masculine aspect. According to analytical psychologist Carl Jung, the feminine aspect of a man is called the anima and the masculine aspect of a woman is called the animus. The New Man, this Shiva incarnate, has the ability to tap into his anima, thereby awakening the divine energy of Shakti from its unconscious state into a state of conscious awareness.

He uses this energy to create rather than destroy, to catalyze rather than militarize, to heal instead of injure. He understands, as Andrea Gibson wrote, “We have to create. It is the only thing louder than destruction.” And so he continually creates ever-changing arenas for further creation.

The redefining of the sacred male principle is the dawn of a new vibrant light, a mature masculinity that is not abusive, domineering or grandiose, but generative, creative, and empowering. He is vulnerable without shame, revealing that his now discarded armor of invulnerability was nothing more than an illusion that hid his true power. He is now free and open to rediscover and reconnect with the power of nature and the cosmos. Tanks be damned. Warmongers be damned.

He is ready to establish true relationships with authenticity and integrity. The Great Mystery moves through him, reminding him constantly that he is it and it is him. He is a force of nature first, a man second, the spear of Gaia herself. And no amount of perceived invulnerability can guard against it.

Without the parochial armor of old weighing him down, he frees himself to honor the path of descent, where he engages with the unconscious underworld and is initiated by the Great Mystery itself.

He has gone from New Man to New God in a mighty feat of self-overcoming that he realizes will require many more feats of the same.

Together with the Sacred feminine, this New God is prepared to engage with the world in a way never before seen. He is Whitman’s multitudes, Goethe’s Faust, Shelly’s Prometheus, Camus’ Sisyphus, and Nietzsche’s Übermensch.

He is Robert Moore’s King, Warrior, Magician, and Lover all wrapped up into one overtly evolving creature. Animal happy, he is Iron John, Wild Man, Father Sky, and Green Man. He is eco-systemic, soul-centric, the prolific planter of the seeds of healthy sustainable change.

He rides alongside the fifth horseman of the apocalypse, protecting her when need be, but mostly empowering her and helping her to see that she is the most powerful thing to ever have existed on the planet.

He is the tip of the spear, self-overcoming and constantly adapting to the constantly changing “air” he flies through. He understands, as Jennifer Ratner-Rosenhagen said, “The real struggle of the heroic individual is not solely to liberate himself from conflict with society, but rather to use the conflict within himself as a source for self-regeneration.”

He understands that love is a double-edged sword, with which he chooses to stab himself, over and over again, in order to discover the harsh pain of Truth. He accepts that true love is a beautiful annihilation. Like Ken Wilber said, “Real love will take you far beyond yourself; and therefore real love will devastate you.” In the end, the sacred masculine exists precisely because of such devastation, rising up from the ashes like his sister the Phoenix. The outdated modes of power that came before him, militaristic and uncouth, are the ashes from which he gathers himself into a force to be reckoned with, a new power that will turn the tables on mankind’s notions of power hitherto.

A power that will co-create a new breed of Hero who has the capacity to expiate his power in order to become a prestigious game changer as opposed to merely a powerful game controller; a truly robust infinite player with the ability to play multiple finite games while respecting the overall infinite game of life.

Militaristic men beware; the time for congratulating yourselves on being conquerors of the world will soon be at an end. Your unsustainable ideals and parochial idols are fast disintegrating all around you.

Soon there will be nothing left of your so-called invulnerable constructs of power. It’s time to make way for the healthy New Man, the vulnerable New God, and the truer power of the sacred masculine.

Ii made this quote: 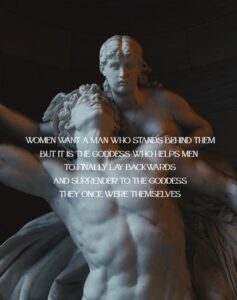 And thank you, for caring!

I also believe that women feel the lack of these men. They make themselves goddesses through hair extensions, plastic nails, als if they almost want to lure men into seeing them as a Goddess. Alas, most of these men see them as a trophy.

Wow, tough one, Gary.Just spoke to an old friend of whom I thought was vulnerable in his own way. In this talk he spoke about looking at Chinese Warrior movies, being drawn to Dragon Armour… I know understand the heavy load he brings with him. I thought he was being held down by shame yet to overcome about his vulnerability. Now I feel and see, that all these years he was cultivating this armour. Did not know this until now that he watched these kind of movies, also like Games of Thrones. Not to judge, but it makes a lot… Read more »

This is wonderful. The sacred feminine might try to be less hostile. When one is open and vulnerable it hurts o be continually bashed because you happen to be male.