Understanding the Significance of ‘OM’ “OM! This Imperishable Word is the whole of this visible universe. Its explanation is as follows: What has becOMe, what is becOMing, what will becOMe – verily, all of this is OM. And what is beyond these three states of the world of time – that too, verily, is OM.” ~ Verse 1, Mandukya Upanishad, Swami Krishnananda

Upanishads are the sacred texts that throw light on the sole idea of collective consciousness and how we are all universal beings of light. These ancient scriptures enlighten us about the higher purpose of our existence.

Among all the Upanishads, Mandukya Upanishad (a twelve-verse text), which is entirely devoted to OM, is considered to be the summary of all the teachings and every other Vedanta Philosophy or Upanishads are an extension of this small yet powerful text.

It discusses the syllable Om, presents the theory of four states of consciousness, asserts the existence and nature of Atman (Soul, Self). Mandukya Upanishad directs individuals towards self realization, freedom and enlightenment, with a detailed explanation on training the mind to achieve a state of one-pointed concentration. The vast wind is your breath. All your actions are cosmic movements. Anything that moves, does so on account of your movement. Your breath is the Cosmic Vital Force. Your intelligence is the Cosmic Intelligence. Your existence is Cosmic Existence. Your happiness is Cosmic Bliss.”

An ordinary person with an understanding of Mandukya Upanishad looks at each and every object/human as his own, thereby converting all the objects into one subject, hence leading to cosmic union. 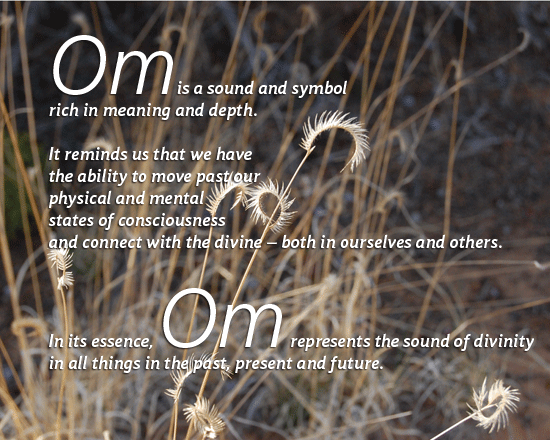 The Verse 1 & 2 talks about OM being the absolute reality; the eternal sound that expands the individual consciousness to Universal consciousness. Swami Rama in the book, ‘Enlightenment without God’ stated that if OM is a word, the whole universe is its explanation.

If OM is a sound, the entire universe is its vibration. The individual self (Atman) and the universal self (Brahman) is one and the same thing; like a river flowing into each other, coming out of the word OM and merging back into the source.

When we die, our Atman i.e. our immortal self contains all our karmic records and experiences travels with the soul. When we acquire a new body, we still have all the records with us in our mind. Only when we give up our attachments can we acquire liberation.

When we are able to recognize the depth of each progressing level from waking to dreaming and from dreaming to sleeping, and combine all the three, what emerges is the absolute reality or the Turiya.

The Waking State or the Vaishvanara In this state, our mind is working at a conscious level and experiences a state of subject-object theory.

We are the subject and everything else in the universe is the object. The ego suffers from the limitation of time, space, causation and therefore, only sees what it has been tuned to see. To understand the waking state, we must understand the dreaming state. Techniques like lucid dreaming, meditation, Yoga Nidra etc. give an insight into the second level of our consciousness.

The dreaming state or the Taijasa

In Taijasa we turn inwards and experience the manifestation of unfulfilled desires. This state consists of seven instruments and nineteen channels (just like the waking state), and it draws its impression based on the understanding in the waking state.

Our mind breaks free from the external stimuli and the unconscious mind awakens. It is the storehouse of all our karma, desires, experiences, etc. which is brought to life in our sleep.
If one can control the dreaming state, it is said he can fulfill all his desires, as we all have what is required within us. But not many of us have established this link between dreaming and waking, and therefore forget the gratified desires when we wake up and continue to live an unsatisfied life.

The third state is deep sleep or Prajna

Prajna or the space of void, where both desires and dream ceases to exist. The finest of the three levels, “in Deep sleep, all experiences merge into the unity of undifferentiated consciousness”. We experience the third state every night to replenish ourselves, but due the inability of the conscious mind to remember it, we forget this experience. But a trained mind, with the help of Yogic Sleep or Yoga Nidra, is the only one that can remember this state. This is the most joyous and blissful state of being as we are closest to the absolute reality.

The fourth and final state is the state of pure being, Turiya

“Neither inward turned nor outward-turned consciousness, nor the two together; not an indifferentiated mass of consciousness; neither knowing, nor unknowing; invisible, ineffable, intangible, devoid of characteristics, inconceivable, indefinable, its sole essence being the consciousness of its own Self. Beyond the reach of cause and effect, time and space, this state transcends the void. The one who knows how to reach this state, is known to reach a realm where the “knower knows and he knows that he knows.”

The last segment (Verses 8- 12) of the Upanishad, speaks about the three sounds of OM, namely A (ah), O (ou), M (mm) and the final sound of ‘silence’, where all the three letters dissolve in the omnipresent sound of golden silence. These three sounds are identical with the four states of consciousness – waking, dreaming, and sleeping and the golden silence; the state of Turiya.

As we chant OM, we first have to pronounce the phoneme ‘A’, Mandukya Upanishad says, “Without the first syllable ‘A’ one cannot pronounce the word ‘AUM’ and likewise without knowing the waking state, one cannot know the other states.” Everything that there is or will be, will be born from the all-pervading phoneme ‘A’.

Moving further, the second aspect of ‘AUM’ is the phoneme ‘U’, which enables us to experience the dream state of our consciousness. With meditation when we are able to master the dream state, we understand the true nature of ‘U’ and conquer our unconscious mind (the storehouse of past life impressions, feelings, emotions, etc.)

The third sound of ‘AUM’ is ‘M’, which is the subtlest of all three levels of consciousness and one who knows and understands ‘M’ can expand his consciousness and connect with the universal consciousness. A person who masters the art of this state is said to be able to control his sleep and meet his true self every time he decides to sleep.

Aum is a cosmic vibration. When you chant ‘AUM’, feel each sound – the A from the base of the torso to the heart center, the U resonating in the throat center, the M creating vibrations in the head and beyond. Reflect upon each sound as a whole. Feel the vibrations of the final “mmmmm” in the body.

“Penetrate deep into the word “Om”. Gradually the word will disappear and only the silence will remain. The word is a support. The meaning is within you. Om brings out that meaning which is hidden in your soul.” ~ Amit Ray, Om Chanting and Meditation

AUM is the echo of the absolute reality without beginning or the end and embracing all that exists. Tune In, feel it inside

cool explanation of the sound and the written symbol!

I Don’t Believe in Love at First Sight