Five Quotes by Shin’ichi Suzuki to Change a Generation

Strangely I had been compelled to write an article about the Japanese Theatre practitioner Tadashi Suzuki. Yet when I searched for his quotes online I accidentally came across another Suzuki entirely and (without noticing) began eagerly reading the kind of quotes that send a tingle up your spine. It was only when I was half way through a huge long list of them, that I realized my mistake. However, Shin’ichi’s quotes resonated with me on such a level that I decided to focus on him instead, even though I knew nothing about him until tonight.

Shin’ichi Suzuki was a Japanese violinist who became famous after World War II when he used his inspired Suzuki Method to bring music to children using the same principles that causes them – with their minds like sponges – to pick up second, third and forth languages.

Recognizing that music is simply another language, he modeled his Method and named it ‘Talent Education’, striving to teach with love and kindness, and with the upmost respect for the children he worked with. He was unique because he deeply loved children and longed to make an impact on a generation after the atrocities that war had imprinted on him, seeking to raise that generation with ‘noble hearts’, perhaps believing that individuals who appreciate and understand music would never partake in such bloody and base things as wars.

The thing I most admire in him is that he desired to raise this generation as equals in the direction of peace rather than what so often happens in the arts when talent is concerned, when people hunger after and exploit musical prodigies, getting swept up in the hysteria of it all and revering the musician as if they were a God. Instead, he was humble. He treasured each child individually and his method was most definitely anti-competition. Here are his quotes:

1) A New World Begins with a Young Child

We all have the potential, but this quote really drives home for me the fact that we so often forget to remember people’s innocence. Some of us are so busy churning along and focusing on the future that we forget that the most precious moment are those with children, and the enormous effect we have on those children around us can change everything. We must honour children; give them the space and the courage to play and find their own feet. Not break their spirits and greedily keep their talents all for ourselves. We are so hard on ourselves. We will make mistakes, it’s inevitable. This sentiment must have been particularly impacting Post War when music and the teaching of it was (and still is really) a highly elite and strict practice.

The amount of stress and pressure put on children anyway, without an extra pressure like a potential such as musical talent, is horrifying when you think about it.

Perhaps it drives us to do wonderful things, but like the case of Australian David Helfgott can also lead to things like mental illness. We all make mistakes. Let’s love that about ourselves rather than punish ourselves for it.

3) Man Is The Son of his Environment

When you’re comparing yourself to everyone else and wondering why you don’t have this confidence or that will or are unable to move forward in various areas of your life remember – you and everyone else are a product (horrible word, OK son or daughter) of your environment. Not everyone had a loving and nurturing childhood with solid, understanding and forgiving parents, and that’s OK.

It doesn’t mean anyone is better than anyone else, or more deserving or even luckier. It just means we have different lessons. Unfortunately the child always understands it was their fault and that because they had less than someone else in that department it makes them guilty. It doesn’t. We are all love. In terms of music this echoes Shin’ichi’s ethos that within a loving and nurturing environment (as opposed to a traditionally strict and harsh one) children creatively flourish and blossom.

The musical reference here is obvious. But it applies to everyone else as well. If we speak of and about pure and loving things, then it reflects our pure and loving heart.

If we are impeccable with our words then we are impeccable with our hearts. If we are authentic and true to ourselves then this comes across in our action, speech and energy. Just our presence will be enough to wrap others in love. From the inside out, not looking out, but acting from within. This is true nurture and it’s essential for anyone who wants to play life with art; with the care of a beautiful melody.

5) Children Learn to Smile From Their Parents 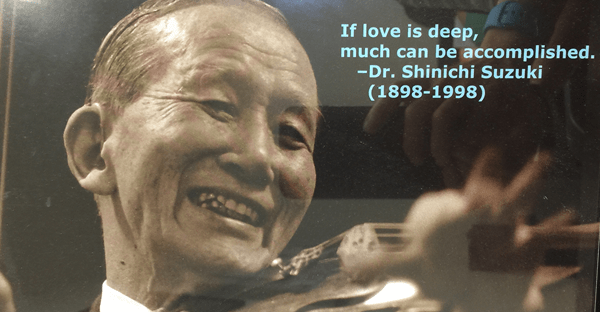 It’s almost as if we learn to be carbon copies of our parents only to override this along with our conditioning and ideas of happiness.

Breaking the parental mode is the one of the hardest tasks we will ever come up against and Suzuki recognized this. He saw that whilst many parents were educating their children in such a way to enhance or make easier their lives, what they were really doing was damaging it.

Wasn’t this supposedly part of the reason Hitler became so dangerous? Because his father rejected his creativity? Well, it’s one theory anyway.

We learn to smile, learn to walk, learn our stance and way of communicating from our parents. If a generation takes upon itself all the bad habits, the selfishness, the ego-centered mode of functioning then we will forever pass it on to our children; and for generations to come.

Children learn to smile from their parents means we have in our hands the potential to change a whole generation by overriding those bad habits and deciding to do some things differently. To learn to smile and mean it, or at least find it in ourselves to discover the moment we stopped remembering how.