How to Remain a Zombie-slave in Five Easy Steps Have you ever caught yourself thinking that maybe the examined life isn’t for you? That becoming the best possible version of yourself sounds like way too much work? That perhaps the pursuit of enlightenment is for the birds and maybe MLK’s dream is nothing more than a pipe dream? And all that peaceful warrior, rainbow warrior, and infinite player talk is just highfalutin psychobabble? Then this article is just for you. So kick back, relax, and forget about all those self-improvement articles. Here are five easy steps to remaining a zombie-slave. Brains not included.

“Disobedience is the true foundation of liberty. The obedient must be slaves.” ~ Henry David Thoreau

Forget the first part of that quote. You’re a zombie-slave now. Obedience is the name of your game. Obey. Obey. Obey. Forget the fact that you sound like a sheep. Conform to the status quo, especially the authority that reinforces it. Kowtow to cops. Never question their callous actions.

Never question the law no matter how stupid, outdated, and immoral the laws may be. Keep developing that particularly banal flavor of “schizophrenia in which we are not only the slaves to its imposed behavior, but we are also the police force of it,” paraphrasing David Icke. Pay homage to the plutocratic government and the mindless mandarins who run it. Just fall into line like a good little zombie-slave. It’s so easy it’s stupid. You are now duty-bound to the system, no matter how unhealthy, unsustainable, immoral, or unjust it may be.

Leave the cart in front of the horse. Maybe someone else will move it, maybe not. It’s not your responsibility. Dare not reason in the realm of the unreasonable.

Like Lord Byron said, “Those who will not reason, are bigots, those who cannot, are fools, and those who dare not, are slaves.”

“There can be no tyrants where there are no slaves.” ~ Jose Rizal

Find a nice little hierarchy of nine-to-five depravity. Work relentlessly with your culture’s outdated sense of responsibility like a whip on your back. Let your slave-boss pound pusillanimous presumptions into your zombie-brain, while the powers that be piss down the pyramid and tell you it’s rain.

As far as you’re concerned, it is rain. Trickle-down theory is perfect. Who cares it smells like piss? You’re a zombie. Who cares if it tastes like tyranny? You’re a slave.

That shit is for conscientious, compassionate human beings with empathy. You’re a one-track-mind zombie-slave with your eye on the prize. Screw the journey! The journey is just a disguised grind anyway, right? You’re set on the goal of being head zombie, the destination of being master of slaves. You strive for the trophy of having it all.

“It is a truth universally acknowledged that a zombie in possession of brains must be in want of more brains.” ~ Seth Grahame-Smith, Pride and Prejudice and Zombies There you sit, a too-fat king on a throne of oil and pigeons. A giant, detached, breathing-in thing of dissociation, codependence, and ignorant bliss. Reveling in your zombie sloth and slave inefficiency. Nature is all around you, beleaguered and decimated by your overreaching overindulgence. She’s your own personal whore, and you her inadvertent rapist.

Guided by gluttony’s cruel compass, God’s own fat curled around your stomach, you reek of immoderation and excess. Just like every good zombie-slave should.

Who cares your beaches are fat with oil and human stains. Who cares nature is choking on six-pack plastic rings. Who cares your sun is a chemical orange, and your moon is a dead-gray god looming over the rotting meat and bone, the offal and the waste. You’ve gotta eat, right? Moderation is for the pecking of birds.

Wherever there is hunger – the hollowed ribs of children, the honeycomb, the crib, the volcanic throat of this-or-that means or end– you eat. You eat in the gutter. You eat in glitter, in sequins, in sequence you line the chow halls, begging, bulging, and belching, over and over. You eat from the star-spangled dish, the gas tank, and the lesser slave’s hands.

You eat the smorgasbord while others eat the scraps. You want nothing less than everything. You want all the brains, all the whips and all the guns. And the only thing that can stop you is the will of healthy, courageous, free men.

“The irony of being a zombie is that everything is funny, but you can’t smile, because your lips have rotted off.” ~ Isaac Marion, Warm Bodies

Do not stray. Stay inside your nationalized bubble. It deserves your faith. “They” deserve your xenophobic rancor. You were born into the greatest nation ever, after all. Who cares that the other nations aren’t as inherently awesome as yours is. Surround yourself with sycophantic patriots with Big Macs for brains.

Stick to armchair-quarterbacking from your La-Z-boy chair. Stick to your next material fix, as you succumb to the so called elite commercial-narcissists in suits snorting oil through star-spangled straws while the rest of the world dries up to a crust.

Never read. Brains are for eating, not for gaining. If you do choose to read, stick to just one book. Preferably a dogmatic book that claims to have all the answers but prevents you from asking questions. Forget philosophy, spirituality and meditation. They would be too much for your little zombie brain to digest, and too much for your little slave heart to handle.

You’d have to think outside of the box of being a slave to the system and a zombie to the unhealthy state of the human condition. And especially don’t try to come up with a philosophy of your own. That would require a courage and a sense of humor of the most high. Forget about it.

Set your alarm. There’s “work” to be done keeping the fundamentally unhealthy, unsustainable system in place so that zombies are “free” to be dumb and debt-slaves are “free” to pay for their chains.

“Something coming back from the dead was almost always bad news. Movies taught me that. For every one Jesus you get a million zombies.” ~ David Wong 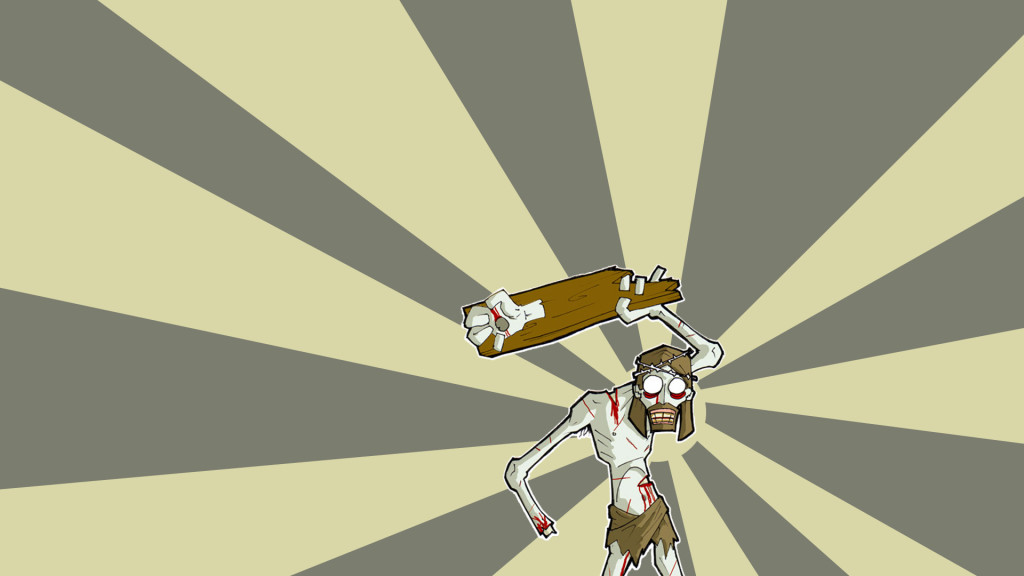 Carry it with you to work like a good little somnambulant nine-to-fiver, where the steely juggernaut of Corporation Inc. splits the smog with its artificial stink, and the pensive faces of your fellow debt-slaves look on as they chip away at a debt that can never be paid back.

Keep your comfort zone tiny, invulnerable, and averse to stretching. Don’t give into the temptation of other baskets. Don’t budge an inch from your way of viewing things, even if a healthier, smarter way presents itself. Relish in the cognitive dissonance. Placate yourself. Pity yourself. Cry your whiney, woe-is-me sob story while doing absolutely nothing about it, but still expect things to get better.

As for the box, might as well admit that you can’t think outside of it. Quit trying to. Just cling to your basket and do your freaking job so you can buy more things-things-things you don’t even need.

So you can go home to your innocent, impressionable children and teach them to cling to the same damn thing. Plutocracy or Idiocracy? Either way, welcome to the Dawn of the Dumb.

Someone Once Told Me That Human Beings

Someone once told me that human beings have three dimensions: how you see yourself, how others see you, and how you want others to see you. The closer the distance between the three dimensions, the more at peace you are and the more stable you become.~ Marwa Rakha