“The human mind is a delusion generator, not a window to truth.” ~ Scott Adams

As soon as your head stops spinning, I’ll explain.

The human condition is a double-edged sword: we’re fallible, imperfect, and prone to mistakes on the one side, and yet we have the capacity for reason, logic, and open-mindedness on the other.

But it goes deeper than that. We could be wrong even about the very nature of reason, logic, delusion, and open-mindedness.

Indeed, we could be wrong about everything, in infinite regress, a kind of recursive infinite wrongness. It could all be an illusion of a delusion of an illusion of yet another delusion, ad absurdum. Or, maybe not.

One can easily slip into a blackhole of overthinking, just trying to make sense out of it all. But we can only self-correct from where we are. And where we are is a fallible, imperfect, prone to mistakes, naked ape swimming in the uncertain waters of fractal wrongness vainly trying to be right despite a universe that dwarfs any notion of rightness or wrongness that we might have.

Luckily, or unluckily (or Meta-luckily), we have right Now to consider – this instant, this immediate and ever disappearing-reappearing promptly-imperfect present – to put it all into perspective somehow, to dissect, resect, and vivisect the animal of our fractal wrongness as we fall ever-further into deeper wrongness even while we self-correct into higher rightness that will still be wrong.

But just as the journey is the thing, so too is the fall.

“There is a way of being wrong which is also sometimes necessarily right.” ~ Edward Abbey

Here’s the thing: Nobody is off the hook for being wrong. The best we can do is get better at recognizing the hook for what it is so that we are less likely to get dragged away by it. By developing and practicing disciplined strategies for cutting the line and negotiating the hook before the Fisherman of Close-mindedness can reel us into his Boat of Dogmatism.

The most effective tools we have are logic, reasoning and the use of probability. The most effective strategy we have is to use these tools to question and interrogate the veracity of reality and the validity of our perception of it.

So, we’re more than likely wrong. Good. Now that our skeptics hat is on and our rose-colored glasses have been left hanging off the last self-similar fractal of wrongness in our rear view mirror, we can begin to self-correct. Nothing entrenches us in our wrongness more than being convinced that we’re right.

As Nietzsche said, “Convictions are more dangerous foes of truth than lies.”

But what is it that bolsters our conviction? What is it that shores up our certainty and blinds us from seeing past our deceptively conceived anti-questioning ramparts? There is a plethora of logical and cognitive fallacies out there, but perhaps the primary thing that reinforces conviction is pride and seriousness.

We are a smug and vain (prideful) species, even as we stare like a deer in headlights into eternity. We’re a solemn and self-important (serious) animal, even as we’re dwarfed by a suffocating and colossal universe. Even with our ability to reason logically using probability to interpret it all, we somehow manage to use it to keep ourselves comfortable, safe, and secure in our worldview.

As Kathryn Schulz said, “Our love of being right is best understood as our fear of being wrong.”

And so, we put on airs. We haughtily stand by our convictions. We’re heavy with uppity self-seriousness even as we’re standing on the razor thin ice of our beliefs.

Something has got to give. We cannot self-correct in a vacuum. We must embrace that vacuum and squeeze all the hot air out of it lest we fall further into ignorance.

There must be a way to make the fractal wrongness of the human condition more flexible and less rigid, more adaptable and less intractable, more of a playful game and less of a serious standoff. 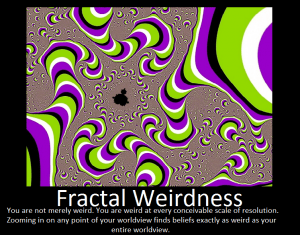 “It is very unnerving to be proven wrong, particularly when you are really right and the person who is really wrong is proving you wrong and proving himself, wrongly, right.” ~ Lemony Snicket

It’s time to turn the tables on the cosmic joke by simply laughing at it. In short: it’s time to go Meta with the foolishness of it all. Keep using the sound tools of logic, reasoning, and probability. Keep deflating self-important seriousness into authentic sincerity.

But have fun with it. Laugh at it. Play with it. Tease it. Dance with it. Re-imagine it in ways that shock your soul into heightened awareness. Shoot yourself in the foot before someone else does, or before the passage of time deems your work outdated and uncouth.

Being wrong isn’t so bad. It can be fun if you let it be. It just depends upon your perspective. Just remember: we’re all wrong.

As Chuck Klosterman said, “Everybody is wrong about everything, just about all the time.”

We’re all stumbling, fumbling apes with big brains vainly attempting to pigeonhole our myopic view of truth into tiny boxes that the next generation will either flatten, discard, burn, or simply ignore. So be it. It’s all laughable. It’s all a joke. We might as well own it and then get better at being wrong by being less serious about being right.

At the end of the day, self-correcting in the muck and mire of fractal wrongness is a deliciously deceptive journey of labyrinthine proportions. But at least we have the wax wings of our imagination to fly up and get a better perspective from time to time, even if we do end up being wrong by eventually flying too close to the sun.

And when we inevitably fall, we’ll still have logic, reasoning, and probability as our bedrock. We’ll still have laughter and a good sense of humor to leverage a little fun into our journey of eternal wrongness.

“If you are not making mistakes, you’re not taking enough risks.” ~ Debbie Millman We all make mistakes, don’t we? Yet, our culture instills this...