How to Liberate Ourselves from Blaming Ourselves and Others

As one goes through the stages of evolving and maturing in consciousness, so does their perception of reality also goes through a shift. What was once relevant or “true” at one stage of our lives may become something that feels limiting and constrictive at another stage.

You may have read in previous articles about the journey our consciousness takes as it rises and expands being liken to a tall building. Those living on the bottom floor of the building are seeing the same view of the street outside as those living on the top floor, except their perspective of it is completely different. In this analogy we can see that although the world outside is essentially the same for those who have begun to awaken into higher states of consciousness, their perspective of it has greatly expanded. They see a much broader view of not only life but of themselves than those who are still living unconsciously.

Some of the themes that change greatly as we go through the expansion of our consciousness are the ideas of blame and ownership.

For those living unconsciously, it may feel completely appropriate to still hold on to judgment and blame towards another person’s actions, and if other people can be “blamed” for something, that must also mean that when we do something that causes pain or suffering, we can be blamed as well.

However, as our frequency rises and we begin to reside in a fifth dimensional perspective of reality we come to realize that this is not the whole truth. The line between “right” and “wrong” begins to blur in the fifth dimension, so much so that it forces all spiritual seekers to come to some very important questions in their quest for “truth” and healing: “What is truly my fault? What is truly someone else’s fault? If I am an empath, what emotions are actually mine, and which are of other people? Are any emotions mine to own?”

“What we call society is the sum total of human thinking and feeling. It is a reflection of our attitudes. When we change them we change society. We are only a change of mind away from real freedom, the freedom to express our God-given uniqueness and celebrate the diversity of gifts, perceptions and inspiration that exist within the collective human psyche. The creative force is within us all and desperate to express itself.” ~ David Icke When discussing the question of blame and ownership, the answer may not only surprise you, but it might anger you. And before I say what I am about to say, I first want to emphasize that you must always stay true to where you are in your journey.

As stated above, the “truth” or rather our perspective of reality will shift as we raise in consciousness, so if you are having an authentic feeling of blame, rage, guilt etc.. in reaction to a situation, it is paramount to honor your truth, whatever that may be. In order to ever transcend blame we must first accept it as is, and love it anyways.

That being said, the answer to the question of what is yours, what is someone else’s, or who is to be blamed… nothing and no one. Yes, you heard that correctly, nothing is anyone’s fault, nor is it yours. Now let me explain what I mean.

Think about any emotion you have had over the years, or even about a belief system you once had that either made you feel afraid, ashamed or sad. Now think about where you got that belief system from.

Most people will not even know where a belief system that was ingrained in their psyche originated from, or many people may be able to connect it back to their parents, or friends they had while they were growing up.

If you can in fact remember where you learned a fear based belief system, it may feel appropriate to blame whatever emotion stemmed from that belief system on the person you got it from. However, this is where we take this process one step further and ask the question, “where did the person I got it from, get it from?”

I mean, if we are to blame our lack of belief in abundance or financial security, for example, on our mom, doesn’t it sound slightly unfair to stop the belief there? I mean if she believed it, that means she must have gotten it from somewhere too, maybe her mom taught her, and so on and so forth.

The point of all this being, we could travel into the beginning of time blaming so and so for originating whatever belief system we adopted from our parents, or society, or television, whatever, but the fact of the matter is, we will never truly be able to determine who is to be “blamed” for anything.

Collectively as a society and by agreeing to partake in the “human condition” when we incarnate on earth, we agree to go through a period in which we have ego based beliefs and we are all responsible for perpetuating these belief systems while we are still identifying with our ego vs. our conscious awareness.

Also, those of us who resonate with the label “empath,” on some level know that we have come here to heal the planet. And how do we heal the planet of its fear based belief systems and painful emotions? We feel them! And how else could we feel an emotion if we were not to actually believe in something that catalyzed us to feel that emotion or to energetically pick up on other people’s emotions when we were around them?

In fact, the more we “own” any emotion as our own, the more we reiterate to our subconscious to keep it there! Imagine if the next time you felt a feeling, instead of saying “my anger” you said, “anger that my energy field is healing right now by feeling it.”

To experience an emotion (because let’s be honest, we will never truly be able to pinpoint exactly where or who an emotion came from, although at times it may feel as though we can) without attaching ownership of 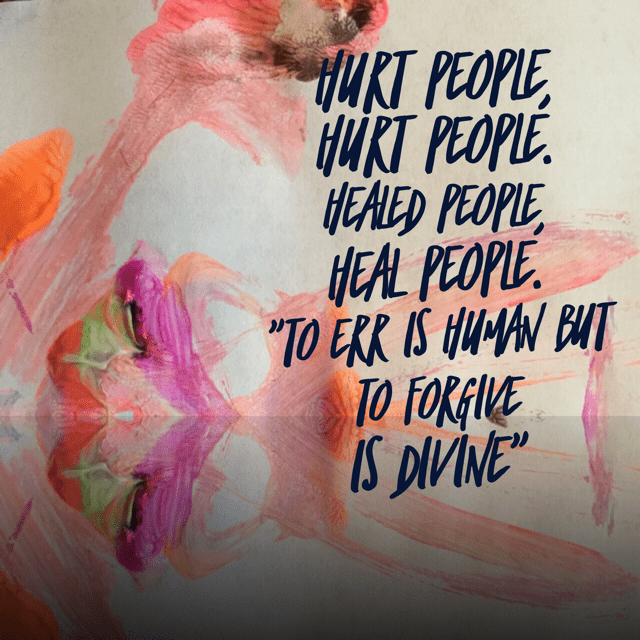 it allows it to heal to completion.

Its as if, on some level we agree to buy into the “dream” of reality so that we can adopt all the limiting belief systems of the planet just in order to later in life (when our awakening journey starts) begin to unravel them by LOVING them, accepting them, and forgiving all notions of “wrongdoing,” either of other people, or of ourselves. It all happens perfectly as a part of a divine plan.

To forgive is divine

As we reach a certain level in our awakening process we come to know that the only option that will truly free us from trying to control others, or reality is complete forgiveness. Not only is it divine to forgive another, but when we come to realize that all is one, meaning all is source energy, we realize that there was never anything done to “forgive” in the first place.

This starts within. Whatever you think you did, blame yourself for, said in anger or judgment, what if you came to know that in all moments you were doing the best you could? To know that we are always part of an unfolding plan that allows us to not always “know” better, we come to the point where we can forgive ourselves for acting in a manner that did not uphold our highest integrity.

Consequently, the moment we forgive ourselves for that which we did not know we were doing at the time, we automatically forgive others. We are all here at this time helping one another unravel fear, and heal painful emotions. We are all in this together. Thank you for this, Nikki