Four Ways to Turn the Tables on Tyranny

“Our strategy should be not only to confront empire, but to lay siege to it. To deprive it of oxygen. To shame it. To mock it. With our art, our music, our literature, our stubbornness, our joy, our brilliance, our sheer relentlessness – and our ability to tell our own stories. Stories that are different from the ones we’re being brainwashed to believe.” ~ Arundhati Roy

In the wake of yet another tragic example of how the voting system simply does not work, many of us are left scratching our heads asking, “What kind of democracy is this?”

Well, simply put, it isn’t a democracy at all. It’s a tyrannical oligarchy of the worst kind: one that’s disguised as a democracy and hidden behind the smoke and mirrors of political propaganda. Just because governmental decrees are no longer issued by royal fiat but are instead issued by lobbying and propaganda, doesn’t make it any less tyrannical. It is nothing more than inverted totalitarianism.

And it is our responsibility, if we would be proactive citizens, to revert this totalitarianism. The 99% must turn the tables on the 1% or we will not survive as a species on this planet. It’s as simple as that.

Here are four ways we can turn the tables on tyrannical oligarchy.

Wake up to the fact that the plutocrats have created their own economic apartheid. Money is the illusory carrot being dangled between you and the truth.

The way the current oligarchy maintains its vice-grip on power is by making the people believe that it’s all okay because greed is good, and making money is important, and with enough money comes the freedom to do what you want like buying the rules made by government and funding lobbyists who significantly contribute to the laws that Congress writes and passes.

While the world goes through the motions of getting poorer and poorer the moneyed elite are getting richer and richer, to the extent that it is costing people their lives. We must be able to muster the courage to put our foot down and draw a line in the sand. A declaration of emergence is needed.

One way to put our foot down is to mock the plutocratic entities that have a monopoly on power and to ridicule the cult of personality.

Shame is a very powerful psychological motivator. The sooner we make them realize that they have to be morally responsible with their power, the sooner we will be able to bring balance to the world.

And the way we make them realize it is through the stultifying effect of shame.

And have no illusions, countries the world over are badly governed. Through a healthy mockery of their power we inadvertently get power over power and turn the tables on the power dynamic.

“A primary purpose of the police is to enforce the delusions of those with lots of pieces of green paper. Those without the green papers generally buy into these delusions almost as quickly and completely as those with. These delusions carry with them extreme consequences in the real world.” ~ Derrick Jensen

No longer do police act in the capacity of peace officers. Now they are simply hired thugs of a government that no longer has the best interest of the people at heart. Like George Orwell said, “The capitalist society is a police society where the number one goal is the protection of upper class property.” 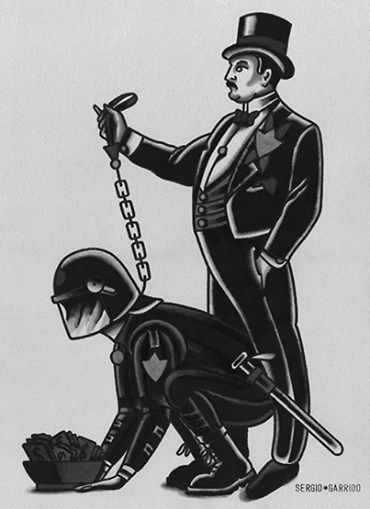 While the governments of the world have been taken over by corporate interests, bankers and special interest groups, our countries have been turned into police states.

Systems of control vainly attempt to keep everything the way it is, inefficient with a controlled obsolescence, so that We the People keep buying things we don’t need so that the rich can keep auctioning elections and buying laws to keep the poor suppressed.

Like Stefan Molyneux said, “To efficiently control the human farm, you need a majority of broken, self-attacking, insecure, shallow, vain and ambitious sheep, forever consumed by inconsequentialities like weight, abs and celebrities –and a minority of volatile, angry and dominant sheepdogs, which you can dress up in either a green (military) or a blue (police) costume and use to threaten and manage the herd.”

Black-booted police state beware, your fascist violence is no match for our creative freedom. The so called “herd” is methodically being populated with wolves in sheep clothing, and we will bite if we’re cornered. We can turn the tables on the police state by mocking it like Pussy Riot mocked Putin, and like Anonymous mocks power.

“History does not repeat itself,” wrote Mark Twain, “but it rhymes.” And we’re here to bring an updated healthy rhyme to your outdated dissonant rhythms. Your watchdog heart and brainwashed brains don’t stand a chance against our compassionate hearts and open minds. Your days are numbered.

Civil disobedience has always been a game-changer and the game is about to change. You might as well just toss those badges in the trash for all they’ll be worth. Better yet, join us. The thin blue line is an illusion at best.

“The NDAA is not about protecting us. It is about protecting the state from us. That is why no one in the executive or legislative branch is going to restore our rights. The new version of the NDAA, like the old ones, provides our masters with the legal shackles to make our resistance impossible. And that is their intention.” ~ Chris Hedges

When Adolf Hitler was in power in Germany he was quoted as saying, “What good fortune for governments that the people do not think.” Don’t be an unthinking citizen easily influenced by the likes of Hitler. Become a self-aware proactive citizen instead. Like Frederick Douglas wrote, “Knowledge makes a man unfit to be a slave.” Indeed, the more we know, the more capable we are of remaining free men and women.

As it stands, The National Defense Authorization Act (NDAA) is the most diabolically authoritarian law to ever come down the governmental chute. It’s anti-freedom in the name of security, the most deceptive kind of law.

The NDAA is a greater threat to our national liberty than the terrorism from which it claims to protect us from. It impermissibly impinges on guaranteed First Amendment rights and lacks sufficient protections to meet the requirements of due process.

It’s past time that we get out there and petitioned against the NDAA. We must ridicule it. We must scorn it to the nth degree. Blaspheme it in the face of the president if need be. Inform people about how corrupt it really is. People will remain ignorant as long as we allow them to be.

Let’s not allow them to be; not only for the sake of their freedom but for our own, as well as for the freedom of our children and our children’s children. People are born to be free. Ridiculing acts like the NDAA, and attempting to abolish them, are ways of safeguarding such freedoms.

“It’s better to die on your feet than live on your knees.” ~ Emiliano Zapata In 1970 Operation Shamrock was an NSA program that used warrantless surveillance to spy on private telegrams leaving the US. In 1978 The Foreign Intelligence Surveillance Act (FISA) was written in by congress to prevent this violation.

But beginning with the adoption of the Patriot Act in 2001 (The government’s backbone-less, scared-stupid response to 9-11.) “the floodgates opened for covert government surveillance not only for the NSA, FBI, CIA and Homeland Security but for hundreds of municipal and state governments, a green light to infiltrate and spy on millions of American citizens” (Renee Parsons).

Now FISA is a dead horse that’s been beaten into non-recognition, because it has been morphed into a vehicle of covert means shielded from effective oversight through countless amendments by the Bush and Obama administrations. And now congress itself is hung-up on the fear-mongering tactics of the War on Terror.

It is now up to us, We the People, to challenge this surveillance state, lest we inadvertently become what George Orwell warned us against in his novel 1984. Leaking information has become the civil disobedience of our age.

The late historian and activist Howard Zinn described the act of civil disobedience as “the deliberate, discriminate violation of law for a vital social purpose… Such acts become not only justifiable but necessary when a fundamental human right is at stake and when legal channels are inadequate for securing that right.”

Even Thomas Jefferson realized it, writing, “If a law is unjust, a man is not only correct to disobey it, he is obligated to do so.” Snowden, Manning, Assange, Jeremy Hammond, and the late Aaron Swartz have all continued the tradition of civil disobedience by revealing the details of global mass surveillance programs.

However, we must remember that it is not so much these government agencies that are calling the policy shots, but the transnational mega-corporations, with their private armies of lawyers and lobbyists, who are pulling the strings of presidents, and getting entire governments to dance to their greedy tune. It’s time to change the tune.

It’s time to interrupt their corrupt dance. It’s time to challenge the powers that be. Nothing short of the survival of the human race is at stake.

Your empire needs you
Big Brother

I’ll sign the petitions. We need to shut down big oil quick if we want a world at all.