Marijuana has been an essential part of Indian culture, in fact there is a long and varied history of its use in religious ceremonies, dating back to 1500 BC. Some of the sacred text of Hindus, Rig Veda, describes the use of Soma, an intoxicating drink, believed to be marijuana.

I wanted to highlight that how marijuana is so heavily ingrained in the Indian culture that its impossible to ignore its use.

Besides, that it grows in the wild in various parts of the country. Lord Shiva’s association with cannabis is well known, its believed to be his favorite. His devotees, long-bearded sadhus, ascetics engage in pot to attain the spiritual oneness with Shiva. Cannabis holds an important place in Tantric Yoga, as you will find out in the latter half of the post.

As I mentioned before, that marijuana is illegal in India, but during Mahashivratri (Night of Shiva or Great Night of Shiva), mortals are allowed to consume cannabis in the form of ‘Bhang,’ because Shiva use to take Bhang. Its made out of cannabis leaves with a mixture of almonds, spices, cold milk and sugar. Worshipers offer ganja to god and also consume it to attain a blissful state. Many Sadhus might not drink alcohol but are allowed ganja and bhang. 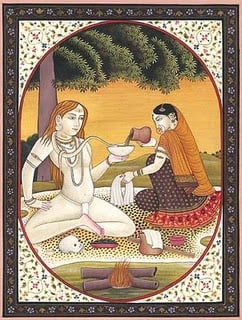 Villagers in Rajsamand district, Rajasthan consume bhang instead of their morning tea. They don’t consider bhang as an intoxicant, but as prasad (offering) of Lord Shiva.

While writing this post, I stumbled upon an interesting piece of information. Cannabis is also an important part of Tantric Yoga sex acts consecrated to the consort of Lord Shiva, Goddess Kali, who is generally associated with death and destruction.

Devotional ceremonies involve cannabis ingestion and ritual sex, which aims at raising the Kundalini energy from the base of the spine up into the higher centers of the brain.

The use of marijuana for religious and spiritual purpose in India is quite deep-rooted, and no one can deny that connection!

I’ve Been Thinking About the Way, When you...

“I’ve been thinking about the way, when you walk down a crowded aisle, people pull in their legs to let you by. Or how strangers still say “bless you” when someone sneezes, a leftover from the Bubonic plague. “Don’t die,” we are saying. And sometimes, when you spill lemons...
Quote Library