6 Quotes from Rumi to Inspire Devotion and Creative Love

Perhaps the less explored and associated with the mystical side of Islam is the incredibly awareness-inducing poetry of the Sufis. One such Sufi – perhaps the most famous of them all – is Rumi. Born in 1207 in Tajikistan he went on to travel through the Middle East having fled his homeland to escape the Mongol invasion.

He ended up in Konya, Turkey and, now a scholar of religious and positive sciences, joined the Mevlana (‘the masters’); otherwise known as the sacred order of the Sufis. His love of the Divine was expressed through dance (the Whirling Dervish), Magic (studying metaphysics and the laws of the universe), and poetry, of which he went on to write reams.

His verse is said to transcend borders and ethnic divisions and is written in various languages including Greek, Turkish and Persian. The closest thing one could come to being a prophet without actually being one, Rumi is still widely read today.

His themes centre around the concept of Tawhid – the primal root of being at one with ‘his beloved’; the essence of love that flows through everything in existence.

The poetry, as with the dance of the whirling dervish who spins like a top on the spot; one hand cast up to receive God’s love where it can pass through the heart like lightning before being channeled back down to earth, is timeless and used to induce a sense of enlightenment. 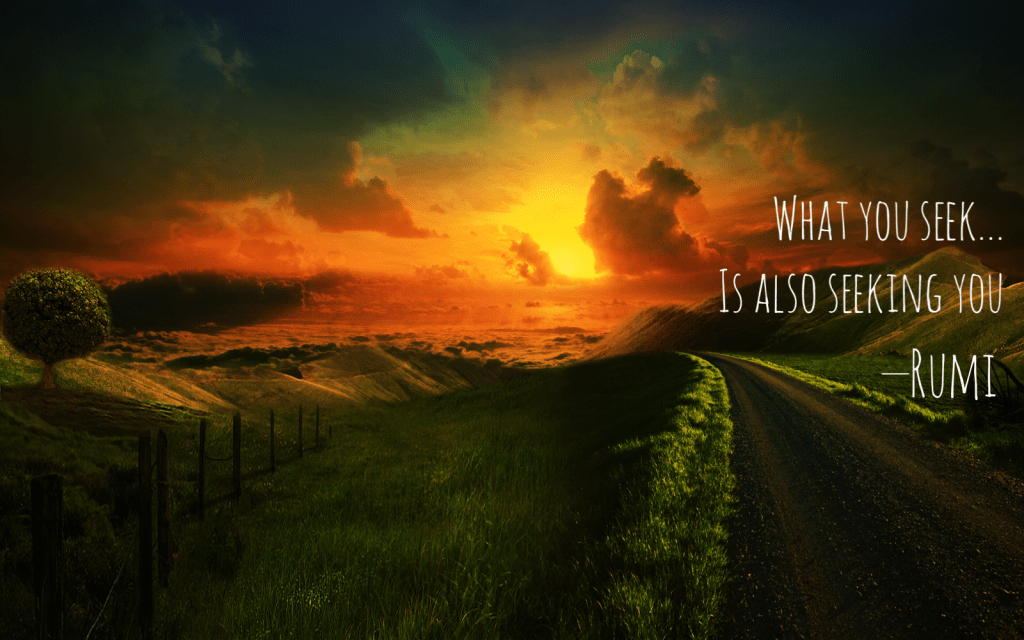 Here are 6 quotes from the poet Rumi:

1) “On the seeker’s path, wise men and fools are one.
In His love, brothers and strangers are one.
Go on! Drink the wine of the Beloved!
In that faith, Muslims and pagans are one”

To Rumi the dignity of life, and in particular human life where we are able to be aware of our origin of the Source and the desire, or need to get back home again came above anything else.

Rumi was not a fundamentalist, but he was often thought of as being ecumenical in an unthreatening and all embracing way. He included all faiths and walks of life to be encompassed and loved by the Divine, echoing the often misinterpreted Islamic assertion that there is only one true God.

The main reason perhaps why he was and still is so popular is that he was an enlightened individual who had been audience to God’s true love… perhaps because he was so inclusive.

2) “When you do things from your soul, you feel a river moving in you, a joy.”

It’s true that when we step foot on our true path, something shifts. We have an innate sense of knowing, a radar that helps us no matter how much we try not to listen to it.

Authenticity above anything else can help us re-discover that path and it comes with an intense and unmoving sense of joy. It’s like they say, the first step is the hardest, and to get the wheelbarrow rolling you must give it an almighty push.

Perhaps we can attribute that to the law of attraction, but I happen to believe, mostly from being touched by Rumi’s poetry, that there is a little more to it than that. We attract our spiritual path leading to our true and higher selves by making a statement to the universe, but that path is also seeking us. 3) “Sell your cleverness and buy bewilderment.”

In it’s rippling similarities to Buddhism, the true teachings of Jesus and pretty much any other religious sentiment that cuts to the heart, Rumi also advised that stupidity (within the realm of the heart) was much ‘cleverer’ than trying to outwit and preach with the mind.

A lack of words and the wisdom to surrender to the universe and have the humility to admit that really, we know nothing, and that should bring us to our knees in wonder at the complexity of existence.

With that he included money and power, like so many sages before him, in the wisdom of the true spiritual path.

4) “Whoever finds love beneath hurt and grief disappears into emptiness with a thousand new disguises.”

The transcendence of suffering, as with Buddhism, was also a Sufi concept and one readily accepted to be a necessary part of the path. When we rise above our suffering seeing it as part of our experience and nothing personal we begin to open doors that were not there before.

The meeting of yin and yang, the realization that love and hate are two sides of the same coin and the union and acceptance of these two polarities is an innate wisdom, one that all sages and hermits have come up against.

To practice suffering with bliss in order to experience ‘emptiness with a thousand new disguises’ within the realm of unlimited potential means to rejoin God. To transcend duality is to dip your foot in the pool of eternity and access the Akashic records on a new level… perhaps a new dimension. In embracing those who hurt us and healing them of their grief, perhaps we might become completely submerged in the pool forever.

5) “Out beyond ideas of wrongdoing and rightdoing there is a field. I’ll meet you there. When the soul lies down in that grass the world is too full to talk about.”

Perhaps the most famous quote of Rumi’s, this wonderful line of poetry triggers a multitude of imagery; of heaven, the Divine, and humanity’s saving grace. A quote that cuts straight to the heart of (most? All??) people who read it, it does what words should really do when chosen so wisely.

Not only trip up the mind to increase awareness but reunite us when we are caught up in downward spirals and negative patterns of comparison and fear. The final line, one that is rarely included with the first line is perhaps more of a mystery.

‘When the soul lies down in that grass the world is too full to talk about’ may reference the inefficacy of words… or it may reflect the completion of the cycle and the individual’s experience of becoming one again with the whole.

6) “When we are dead, seek not our tomb in the earth, but find it in the hearts of men.”

Our legacy on earth, or in this lifetime will not be what material impact we made, but how we made others feel. When contemplating death in meditation or before sleep, we can remind ourselves of this.

That the present moment is all we have, and like Rumi’s worship of creative love and the expressions of devotion he wrote about in his poetry, that is the greatest gift we have to give. You none but You and only You is mY Destination

“silence is the language of god,rest is poor translation”

"The secret of the universe really is minding your own business. What we mean by that is-don't get so involved in the desires or...
Read more

Time is simultaneously one of the most illusive and familiar concepts out there. Familiar because we experience time in every instance of our waking...
Read more

7 Reasons Why Relationships Don’t Make it

We all want to find our soul-mates; the people who understand us on a deep level, love us, and encourage us to be our...
Read more

Ten Quotes That Will Shatter Your Beliefs

“Quotations are like wayside robbers who leap out, brandishing weapons, and relieve the idler of his certainty.” ~ Walter Benjamin Ah quotations, those little packets...
Read more

The Path of Two Spirit People in Native American Tribes

Two Spirit is an umbrella term adopted in Winnipeg in 1990 at the First Nations gay and lesbian conference. It refers to people who...
Read more

Beauty is Much More than Skin Deep

Beauty is not in the face; beauty is a light in the heart." ~ Kahlil Gibran The society we live in has conditioned us to...
Read more