7 Quotes from Hunter Thompson to Shift your Perspective on Reality

A lot of us were introduced to Hunter S Thompson with, “Fear and Loathing in Las Vegas” perhaps one of the most interesting films to put a perspective of what Gonzo Journalism is from Hunter’s point of view. Although it was a beautiful movie it hardly covered Hunter’s complete character.

After Hunter lost his father at an early age he faced a trying life. But of course he made the most of it as it was literally the boredom that killed him in the end.

For someone who valued freedom above everything else, his debilitating condition symbolised the one thing that terrified him the most: indefinite suffering. Instead of prolonging his suffering, he pulled the trigger at the age of 67.

But in those 67 years Thompson has given us enough to last us generations as Hari Kunzru, the author put it, “The true voice of Thompson is revealed to be that of American moralist … one who often makes himself ugly to expose the ugliness he sees around him.”

Let’s take a look at Hunter Thompson’s voice with these seven phenomenal quotes.

1) “Life should not be a journey to the grave with the intention of arriving safely in a pretty and well preserved body, but rather to skid in broadside in a cloud of smoke, thoroughly used up, totally worn out, and loudly proclaiming “Wow! What a Ride!” 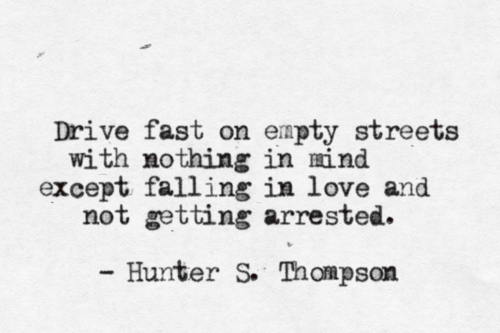 How are you spending your “now”? Are you postponing to live life you’ve always wanted, until you have enough bank balance, or once you are at a higher rank or buy a new house? Why is happiness based on circumstances/ situations that might or might not happen in the future?

The present moment is all there is and it is all you have. Experience the blessing of being alive today rather than postponing it until further notice. Enjoy the ride, and when your life comes to an end, may be you say, “Wow! What a Ride!”

2) “We are all alone, born alone, die alone, and—in spite of True Romance magazines—we shall all someday look back on our lives and see that, in spite of our company, we were alone the whole way. I do not say lonely—at least, not all the time—but essentially, and finally, alone. This is what makes your self-respect so important, and I don’t see how you can respect yourself if you must look in the hearts and minds of others for your happiness.”

When we talk about love, we often think of others and what others mean to us. What about loving yourself first? Only when you love yourself unconditionally, can you love others. Because when you love yourself, you won’t need others to fill the void. You deserve as much love and appreciation as everyone else. And before expecting to get all of these things from anyone else, you should first learn how to offer them to yourself. Don’t forget, happiness is an inside job!

3) “Life has become immeasurably better since I have been forced to stop taking it seriously.”

The only way to evolve as a species is to learn from our mistakes. We are fallible creatures, and perfection is merely an illusion. The moment we accept our imperfections, we will begin to ease off, and and perhaps even garner a sense of humor about our fallibilities.

There will be things or situations that need to be taken seriously, but at the same time don’t forget a spark of humor can help turn things around for you. So let go, lighten up and embrace yourself!

4) “Some may never live, but the crazy never die.”

We often go through life on autopilot, being too comfortable in our comfort zones and harboring a fear of the unknown. Life is to be lived, and not merely exist.

Break free from the mold and strive to think outside of the box. We all have a spark of madness within us, but its only up to us to recognize that and never let it die.

5) “A man who procrastinates in his choosing will inevitably have his choice made for him by circumstance.”

We all procrastinate from time to time. It can be those mundane tasks or bigger things that require more attention and dedication. Its generally related to experiencing the emotional discomfort inherent in making changes in life.

Take the plunge, make the choice and move on before someone else forces it on you.

6) “THE EDGE, there is no honest way to explain it because the only people who really know where it is the ones who have gone over.”

Ever been over the Edge? It exists after your cross the edge and things get a little warped, everyone has their own experiences when they break limits and barriers that were put in.

To push the limits of your sanity has its perks provided you have a safety-line to pull yourself back. As Thompson said there really is no way to explain it, perhaps because to people who haven’t shared similar experiences you will probably be labeled as crazy.

7) “We cannot expect people to have respect for law and order until we teach respect to those we have entrusted to enforce those laws.”

The state of affairs with the law enforcers is probably the same all around the world – brutality, fake encounters, corruption, the list goes on. Although some clouds have silver linings.

But what the world really needs is a police force that protects and looks after the civilians, not harass people based on their color or economic status. Do you feel respected by the police force? I personally feel they need to attend Hunter University.

Thompson lived his life the way he wanted to and even though he cut it short, he will always be remembered for his fascinating outlook of the world.

We aren’t born alone nor do most of us die alone. Sorry to make a negative comment….I don’t like being a drag unless I feel it’s for a higher cause. Our guides and angels accompany us until we are actually born here on earth.

His letter to Nixon was hilarious

The rum diary, fear and loathing, ah the trips

but which book to read? A family member probably has damn near every single one around here so recommend

No sympathy for the devil, Buy the ticket take the ride