Fractal EnlightenmentVR1
HomeLife10 Signs You Have An Emotionally Unavailable Partner

10 Signs You Have An Emotionally Unavailable Partner

Being in a relationship with a partner who’s emotionally unavailable can be taxing and painful. Sometimes we cannot tell if the person will be available or committed in the beginning so we go along for the ride until we find out the truth. This comes about in many ways, with one person being evasive or unable to connect, while the other slowly feels more lonely and frustrated.

Certain people cannot be emotionally available until they’ve sought out the help they need, or get past an emotional trauma.

For example, a married man or woman will not be fully available for another relationship on the side, just as a struggling addict will not have a relationship as their top priority. Some people cannot connect fully due to a trauma in their past, such as an abusive relationship with their parent or spouse; or even a past relationship turned sour.

A healthy way to deal with an emotional unavailable partner is to meet them with honesty, kindness, and compassion. But, the second step is to see if they can be reciprocative. When you find that you’ve given all you can and are still not receiving in return, then it is time to take a closer look at the person, or relationship, and look for tell-tale signs of an unavailable partner.

If you did not see the red flags earlier on, here are some things to look out for if you find that your relationship leaves you feeling alone and unsatisfied.

They are in an unavailable circumstance

Whether they are married, in love with someone else, addicted to a substance, or experiencing a loss such as divorce or death, these people are otherwise occupied. So though these people can generally be attentive and available, they are in circumstances that may cause them to be evasive.

They still flirt a lot

Someone who overly flatters or carries on with flirting past the initial dating stage is not usually interested in the long-haul relationship. Their mindset is still in the pick-up scene, and they generally prefer the chase to the catch.

This also keeps the relationship on an overly shallow level instead of allowing for deeper level connections that is found past flattery.

They do not compromise

When a person is unwilling to compromise, they will not work to get the know the other person, or their wants and needs. They will always insist on their way, even if it hurts the other. Imagine trying to have a relationship with someone who covers their ears and says “la la la” everytime you want to speak to them.

They can be very attentive when things are going their way, but emotionally unavailable when it’s time to compromise or work together.

They blame past relationships

Watch how a person talks about their past relationships. In every breakup there is a point where both must realize that they don’t fit. Someone who only blames the other for the bad, does not take responsibility for their own shortcomings and issues.

An emotionally unavailable person will not be able to recognize what they could have done better, but will only lament on how the other was to blame.

A person who can find a flaw in anything is usually looking for an excuse to end the relationship and move on, so that they do not have to be too intimate or deal with messy emotions. In reality they are not ready, or unavailable for a relationship, and therefore become picky about their partners. 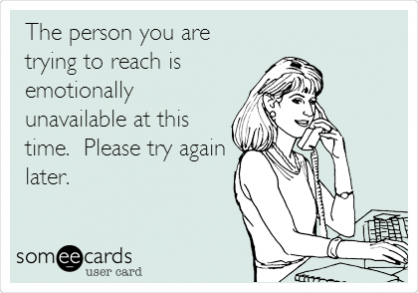 People who are completely closed off tend to keep a lot of secrets, and do not like you meddling in their business.

There is a difference between getting to know someone who is in their shell, and trying to pull out information from someone who wants to stay behind closed doors.

These are signs that they are not ready to be involved or have you “snooping” in their life.

A person who portrays strong signs of anger issues, is usually demanding and can lead to emotional abuse in the relationship as well. Notice the way they treat waiters, or other people around you.

This is a telling way to see where this person will go when they are triggered or bothered. It can also show a general lack of self-awareness, or ability to empathize with others. These signs should not be ignored as many of these can turn ugly and abusive.

Stay away from people who are cocky and braggy. People who are overindulgent in their arrogance usually suffer from a low self-esteem. In order to be fully present and vulnerable in a relationship, a person has to acknowledge their strengths and weaknesses.

Going through a trauma

Notice any trauma that the person may have had from the past. Some people may even say it straight out, but notice the way in which they say it. Have they healed from this trauma, or are they still wounded and holding on to it? Does the trauma affect them in their connecting to others?

Someone who is an addict can very well live a functional life. In fact, like a workaholic, some would say, have everything under control.

But on the other side of this addiction they are unable to be fully present in the relationship, because essentially their addiction is a second relationship in which they give their time, attention, and energy.

Every person deserves to be in a loving and healthy relationship. Even if a partner is a good and kind person, and causes no abuse, there is no excuse for feeling alone and unfulfilled.

Talk to your emotionally unavailable partner honestly about the signs that you observe, and what can or can’t be fixed. We give love and energy in every relationship, and should expect the same in return.

Ester Eckhaus
Ester Eckhaus is a freethinking, philosophizing, spiritual being; focused on self-awareness, and helping people reach their highest selves. She is a poet, currently working on her first poetry compilation to be published soon. She lives and loves in Jerusalem, where she is starting a new chapter in life.
Facebook
Twitter
Pinterest
Telegram
Mix
Tumblr
WhatsApp

The Soul is Neither Born, Nor Does it...

The soul is neither born, nor does it ever die; nor having once existed, does it ever cease to be. The soul is without birth, eternal, immortal, and ageless. It is not destroyed when the body is destroyed.~ Bhagavad Gita
Quote Library

Eye Contact as a Way to Look into One Another