5 Ways to Launch Meta-mind: From Cognitive Kansas to Imaginative Oz

“The true sign of intelligence is not knowledge but imagination.” ~ Albert Einstein

Writing a review for Terence McKenna’s book Archaic Revival, Tom Robbins wrote, “A cyclone of unorthodox ideas that will raise every any-mind out of its cognitive Kansas.”

This concept struck a chord. How can individuals raise their own mind out of its cognitive Kansas? How can we inject the mundane with the exotic, the merely banal with the sincerely novel?

How can we, like Dorothy, ride the tornado of imagination into the transcendent Land of Oz? In short: how do we launch the Meta-mind of flexible thinking, despite the stagnant mind of fixed thinking?

Here are five strategies for doing precisely that. “What if we could use those peak experiences to make us whole, to render us holy?… and in Houston Smith’s immortal words: “Might we begin then to transform our passing illuminations into abiding light?’” ~ Jamie Wheal

You are the universe awake. You are inherently anti-entropic. It’s time to act like it. So what the majority of the universe suffers from entropy? You represent the opposite of that —life. So live!

Dare yourself into self-discovery. Double-dog-dare yourself into dissolving boundaries and transforming them into horizons where you’re free to launch a thousand adventures. This is your life. It’s time to fall in love with it.

It’s time to disappear from the static past and reappear in the dynamic future which all takes place in the ecstatic present.

Right now is all you have to render yourself whole, to re-imagine self-limitation into self-liberation. Your current independence is only slightly less stifling than your previous co-dependence. Launch yourself past both. Interdependence is where Meta-mind breathes.

So dissolve your too strict ego and allow it to resolve into insouciant inter-connectedness. Shatter your fragile mental paradigm on the hard concrete of your creativity. Bear witness as the pervious fragments melt like seeds into the rich loam of your imagination and produce rich, oxygenated, numinous fruit forthwith out. Hack Nirvana through the use of your own imagination. Re-enchant the world. It’s nobody’s responsibility but your own. Become a conduit, a Meta-catalyst between the ordinary and the extraordinary, from neurons to nebulae and back again.

Transform everyday routine into carpe diem excellence. If you have the capacity to turn your life into a work of art, then there’s no reason why you shouldn’t. There’s no reason, other than fear, not to inject poetry into all things.

Interpersonal transformation begins with the solitary decision to be an aspect of the magical whole. You are the author of your own cosmic significance. Sieving mundane reality through personalized poetry is done not just in order to survive but to flourish and thrive.

So make a masterpiece out of your life. Do not tolerate entropy; transcend it instead. Possess, and be possessed, by the power of your own inner archetypes. Use their symbolism as mythical hooks that have the power to drag you into infinity.

“Just as the biosphere stands above the world of nonliving matter, so an abstract kingdom rises above the biosphere. The denizens of this kingdom? Ideas.” ~ James Gleick

Think inversely. Counter the weltanschauung. Discover that sacred space where the Great Mystery itself is free to breathe. A place where juxtaposition re-positions itself, where worms become wormholes like caterpillars become butterflies.

Where the cocoon of the mind cracks open and the flourishing-flutter of frontal lobes becomes full-frontal conscious in an otherwise unconscious universe. And pow! Suddenly the entire universe is perceiving itself through you, using your meta-cognition as a vehicle toward a heightened state of ecstasy.

Investigating the adjacent possible is exploring the union of opposites. It’s diving into the Middle Gray and realizing that the black and white answers pouring into it are merely the sum of its parts, dwarfed by the whole.

Within this great pool of imagination are infinite ideas just waiting to be imagined into the world. Just waiting for our perceptions to become elastic enough to manifest them. Meta-mind is the medium through which such magic becomes self-evident.

We are the living breathing biosphere, standing above the nonliving matter, building Meta-mind’s astonishing abstract kingdom.

4.) Merge with the cosmic narrative Our failure to imagine is our failure to notice. When it comes down to it, there are no ordinary moments. Every moment is extraordinary. Each and every second is an infinite branching out into ecstatic union. When we merge with the cosmic narrative we see infinity in all things.

As Henry Miller intuited, “Even a blade of grass, when given the proper attention, becomes an indescribably magnificent world in itself.”

This is Meta-mind engaged: to perceive infinity through the pupil of the eye and eternity in a heartbeat.

This moment is a seed bursting into infinite potential, a finite Fibonacci sequence compelled to engage with the infinite Phi. It matters little that infinity, like enlightenment, is unreachable. What matters is the journey.

And the enlightened journey is a series of aha moments, a sequence of awes, a succession of astonishments, all connecting and interconnected despite the perceived duality of it all. It’s an existential crossroads and you are the adventuring sojourner. 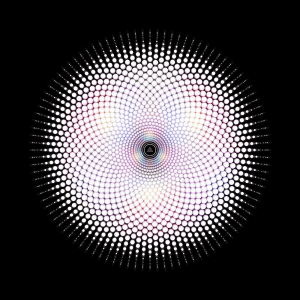 Pattern and sequence your own catharsis. Creatively scramble the self. Push the envelope of experience. You are the ultimate canvas and your experience is the ultimate art. Having and seeking out new imaginative experiences is the best way to reprogram your programming.

Adventure is the thing. Recharging your body-mind with Meta-mind is an act of transcendence despite the inevitability of entropy and death. Don’t fall prey to fixed thinking. Don’t become a victim of monotony.

Discharge yourself from the trivial. Thrust yourself into the numinous by reprograming your original programming through novel experiences. Slip into the masterpiece of your life. Dive into the magnum opus and become a tour de force all your own.

We are self-organizing feedback loops bootstrapping on its own feedback loops, thereby leveraging Meta-mind over no-mind over mindfulness over feral-mind. The universe is spilling in, and we are (as far as we know) the only vessels that have the capacity to capture the magic elixir, the liquid ambrosia, the nectar of the gods.

Our cups runneth over. But our host —the Sacred Cosmos, the Divine Everything, the Dancing Nothing, the Blooming Haha (as Rob Brezsny says)— is more than generous, and it is up to us to empty our own cups, from time to time. In order that we may refill it with shock and awe, with astonishment and wonder, with jouissance and cognitive ecstasy.

So that we may always remain in a state of relearning what we have learned, in order to rise above it, to transcend it and, indeed, to go completely Meta, frontal lobes spread out like wings, over and beyond it all.