Each and every moment we experience an opportunity to pluck the extraordinary from the ordinary. Or we can just allow the ordinary to steamroll over us, flattening us into banality, triviality, and ultimately, entropy.

Every single day we experience the chance to flex our carpe diem muscles. Or we can just allow those muscles to whither and atrophy. At the end of a day of living life well, courage and freedom must always fight against Entropy and Atrophy lest we fall victim to a zombie reality. As Naseem Nicholas Taleb claims, “A man without a heroic bent starts dying after the age of thirty.” How true it seems.

Here’s the thing: Reality, like Time, is probably just an illusion. But it’s a persistent illusion through which we have no choice but to move. The question is: how do we go about moving through it. Fearlessly or fearfully? Courageously or cowardly? Authentically or seriously? Creatively or unimaginatively? Humorously or dully?

Perhaps the best way to navigate more toward the creative-healthy-positive, and less toward the uncreative-unhealthy-negative, is to practice creative doubt despite our proclivity toward serious certainty.

Reality seems fixed, certain and absolute. But is it, really? Perhaps with enough imagination we can un-fix it. Perhaps by using reality as a creative canvas rather than as a fixed form, we can de-absolute it. Who knows?

Who’s to say Robert Anton Wilson isn’t correct when he proclaimed, “The border between the Real and the Unreal is not fixed, but just marks the last place where rival gangs of shamans fought each other to a standstill.” Perhaps with enough creative engineering we can remap the labyrinth of the human condition itself and finally achieve an enlightened state of uncertain universality.

Sure, there are cosmic laws to abide by. Sure, there’s absurdity and incongruity and meaninglessness to contend with. Sure, entropy will eventually absorb our flourishing out, but that should not stop us from flourishing out. We should still “rage, rage against the dying of the light.”

Because, here’s the other thing: We are the paradox –not Reality, and not Time. We are the creature with the psychological hang-up. We are the ones lugging around the baggage of consciousness. We are the mortals constantly wrecking ourselves against eternity.

But it is precisely within the wreckage where a healthy reckoning can be obtained. It’s inside the baggage where we discover tools for navigating infinity. It’s within our psychological hang-ups where we discover a wealth of archetypal masks that we can use toward psychosocial transcendence and existential ecstasy. The reckoning, the tools, the archetypes –these are the creative deviant’s instruments toward achieving heightened states of reality, toward tapping into flow states, toward hacking God and remaking mankind in our image.

Whether you’re an artist painting surreal landscapes for hyperreal museums or a shaman shaping minds into no-minds through ecstatic entheogens; whether you’re a poet waxing philosophic in halls filled with clogged ears and dead-mackerel stares or a musician playing God’s femur bone like a flute around a tribal fire, Reality is too immense a thing to be left to its own devices.

As Nietzsche said, “No artist tolerates reality.” We, the almighty Artists, are here to mix things up, to replace outdated prototypes with updated blueprints, to tear down dead idols and erect new ideals for future artists to tear down. Creativity is intelligence having fun? So be it. Let’s have some fun! 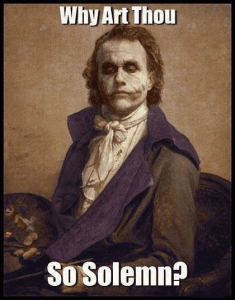 “Consciousness is the only real thing in the world and the greatest mystery of all.” ~ Vladimir Nabokov

Cognitive biases abound in a consciousness rising from the bosom of biological limitation. We’re born into an infinite reality wielding finite faculties, after all. How can we not assume reality is a certain way and not another?

Reality is to human as water is to fish, to put it crudely. But if history has taught us anything, it has taught us that we are consistently wrong about a great many things. Over and over again, our fragile beliefs and precious certainties have been crushed under the mighty hammer of Truth. And yet we still cling. And yet we still vainly attempt to place all our eggs into a single basket. And yet we’re still so certain about our place in the universe.

Aldous Huxley hit the nail on the head with the following statement, “That men do not learn very much from the lessons of history is the most important of all the lessons that history has to teach.” Indeed.

If, as Robert Anton Wilson said, “the totally convinced and the totally stupid have too much in common for the resemblance to be accidental,” then it is incumbent upon us to not be totally convinced. Ironically, we’re more likely to be right by admitting that we’re more than likely wrong than by declaring that we’re more than likely right. Really, it’s all just a rabbit hole away from the ultimate Socratic revelation: “The only true wisdom is knowing you know nothing.”

The funny thing is that we all know this to be true. Outside the box we’re able to nod our heads in open-minded humility. And yet we still choose to close-mindedly climb back into the box of comfortable assurances. We still choose certainty over uncertainty. We still choose to think we know more than we really know.

We still choose knowledge over imagination, despite Einstein’s elegant declaration of truth: “imagination is more important than knowledge.” We do this for one very simple reason: Fear. For which there is one very simple solution: Courage. “I dreamed I was a butterfly, flitting around in the sky; then I awoke. Now I wonder: Am I a man who dreamt of being a butterfly, or am I a butterfly dreaming that I am a man?” ~ Zhuangzi

Uncertainty is more important than certainty. There, I said it. Could I be wrong? Of course I could be. More than likely I am wrong somehow. But when you’ve arrived at that field Rumi spoke of when he said, “Out beyond ideas of wrongdoing and rightdoing there is a field. I’ll meet you there,” then being wrong or being right are dwarfed by the courage to be creative despite wrong or right.

Out there, in that wild and free field, there is a palpable transcendence, a holistic otherworldliness that trumps all notions of duality. Out there, Courage stands atop the corpse of Fear, eyes blazing with the fire of insurgent Love.

This is the beauty of creative doubt. It gets us off the hook of certainty. It turns the tables on seriousness. It disrupts inertia. It takes the ‘fear’ out of ‘fearfulness.’ It smashes uncouth duality into a refreshing non-duality. It flips the petty dynamic between good and evil into an epic dance of yin and yang. It upsets the applecart of “it’s just the way things are,” crushing all the rotten apples into mush that can be used as compost in the Garden of the Meta-real. The Garden of the Meta-real is Rumi’s field. A place where we understand that it’s only when we’re alone that we realize we’re never really alone. It’s a place where an unconquerable sense of humor makes the abject absurdity obsolete.

A place where the menacing meaninglessness is crushed by the tenacity to create meaning despite. It’s a place where we reclaim our minds, where we wrestle it “out of the hands of the cultural engineers who want to turn us into half-baked morons consuming all this trash that’s being manufactured out of the bones of a dying world.” (Terence McKenna).

Screw the Desert of the Real! If a true artist doesn’t tolerate reality, then they must create it instead. They drag the bones out of the desert and into Rumi’s Field. They creatively flesh out new realties. They plant seeds into the rotting corpse of God in order to grow better Gods. They grip Reality like a mighty spear of change. The only firm rule you need is moderation: not too loose, not too tight.

Stay fluid. Stay unfettered. Stay flexible to change and open to magic. Impermanence is your constant medium, the mystical waters in which your creativity is allowed to freely swim. Just remember: it is just as important to empty the universe as it is the cup.