Energetic Blockages and Transmuting Fear Back into Love

“If you wish to understand the universe, think in terms of energy, frequency and vibrations.” ~ Nikola Tesla

On a quantum level we are all just energy. Our bodies are energy, our feelings are energy and our thoughts are energy. Although the Universe is neutral to all energy, meaning that no thought or emotion is technically “good” or “bad” in a moral sense, there are energies that are of a lower vibration and more dense. 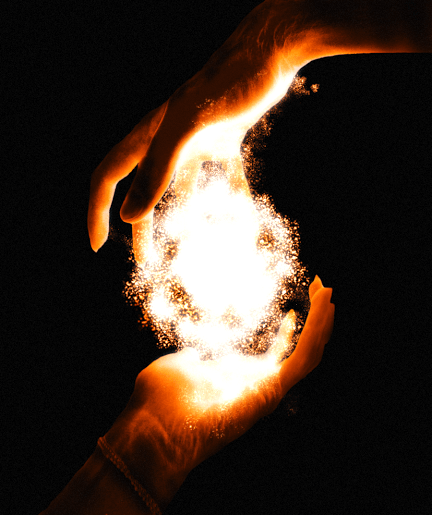 When we have thoughts on a consecutive basis that are formed from the lower vibration energies, we run the risk of forming energetic blockages in our energy field. When this happens, energy is not allowed to flow freely through us, and we may experience “stuck” energies.

In our physical reality, this can manifest as unhealed parts of our psyche (unresolved emotions) which could eventually turn into sickness or disease if left unchecked. All blockages are able to be transmuted from fear back into love by first identifying where they are and then moving through the blockage, which eventually dissolves it.

“In a reality where we all take responsibility for our own feelings and work to heal and transmute the charges within us, getting our buttons pushed is a gift. We become aware of charges and triggers that we were previously not aware of, and as a result of our healing process gain more awareness and consciousness.” ~ Imran Hossain

Identifying blockages actually becomes very easy once we become acutely aware of our predominant thought patterns and also what annoys or angers us in another person. When we have predominantly negative or fearful thought patterns about a particular subject over a span of time, we can almost be assured that some sort of blockage has been formed as a result.

Also, when we pay attention to where we are triggered to feel sadness, hurt, anger, etc… by another person we can use those charges as an indication that we have something to work through. Unfortunately, many people stuff their negative emotions down hoping to not actually have to feel or deal with them, only to have them erupt at most likely an inopportune time which is the body’s way of moving through and releasing some unconscious energy.

These “eruptions” can in fact benefit us because if our body did not release some pent-up blockages it would eventually turn into an illness. Also, because our reactions to others are an indication of where we have some unhealed aspect of ourselves, we can be thankful to have people in our lives that are mirroring back to us places that we may need to look at internally.

Once we have identified where an energetic blockage exists, the next method of action is to move through the blockage in order to dissolve it and transmute it back to a higher vibration. This can be done in a number of ways, and the level of ease at which we are able to do this will depend on how “in tune” or in touch with our own energy we are. For someone who is new to these topics, it may be harder for them to dissolve blockages on their own. They could enlist the help of an energy worker such as a Reiki practitioner, or a shaman. Also, things like using sound therapy, color therapy, and working with crystals have been known to be effective.

For someone who is very in tune with the energy in their bodies, they may be able to move through blockages on their own by just meditating and feeling their own energetic field and dissolving the energy with their own conscious awareness. Whatever the case may be, it is important to not look for a “quick fix”.

We are conditioned to want to take the easy way out, and as a result may depend on the work of an energy worker to just “take it all away”, so that we do not have to deal with it. However, most of the dissolving of blockages involves actually FEELING our way through them.

This means that we are forced to feel our stuffed down emotions in order to move through them. It is only when the energy of the emotions have been felt to completion that they will be properly transmuted back into love. Also, it is important to not judge ourselves because of the blockages.

No one is exempt from them, and we are all on our own spiritual journey back to “wholeness” or higher vibration, so just because we have a blockage or a hundred blockages does not mean one is any less of a person than another.

“There is more wisdom in your body, than in your deepest philosophies.” ~ Friedrich Nietzche

The fact of the matter is, you are already whole and perfect. It is only your thoughts and beliefs and judgment of your emotions that has you believing otherwise and thereby has formed blockages in your energy field.

Thankfully, our bodies are highly intelligent machines and if we pay very close attention to our aches and pains, and where we are holding on to emotional hurts, our bodies will reveal to us where we need to be aware of something.

As long as we continuously bring more awareness and presence into our being, we will be well on our way to transmuting the denser and more fearful energies back into love and light. Nikki,
In relationship to NPD, BDP, and Sociopathic personalities, knowing someone who after 7 years and a child with their partner who has systematically broken down every aspect of faith, loyalty, commitments, fidelity, financial safety, ect, I must ask how to help my friend, who is completly shut down, understand and unblock to once again rise to their beauty before such an evil consumed them?