How Your Thoughts Become Your Destiny

The preceding quote has been attributed to many people: the Chinese philosopher Lao Tzu, the transcendentalist Ralph Waldo Emerson, the Buddha, and even a supermarket magnate named Frank Outlaw, among others.

But who actually wrote the quote isn’t nearly as important as it having been writ. In this article we will break down this curious quote by tracing the seed of Thought to the flower of Destiny, and see what we can learn along the way.

Watch your thoughts, they become words

Every single word originated from the fallibility of the human mind. Our skulls are like little cul-de-sacs of thought just waiting to spring into words. Our brains are tiny galaxies going through the motion of creating a multitude of thoughts through the firing of billions of synapses.

The only way we can share these thoughts with each other is through words. But first our thoughts need to be clear enough to become words.

This seems simple, but sometimes it’s the little things, the basics, that prevent us from being clear with each other. Sometimes getting the horse back in front of the cart is as simple as clearing our minds (the art of no-mind) so that our thoughts are clear enough to become words, while also being okay with the fact that we will never be completely clear on anything – quite the existential gamble.

“No philosophy,” William James asserted, “can ever be anything but a summary sketch, a picture of the world in abridgment, a foreshortened bird’s-eye view of the perspective of events.” So it goes also with our thoughts. Our thoughts can only ever be rough drafts of what we’re perceiving, terse outlines of an unfathomably huge cosmos.

We must first be okay with being tiny cosmonauts in a giant cosmos, both literally and figuratively, so that we can eventually be okay with our words being fallible constructs springing from fallible thoughts. 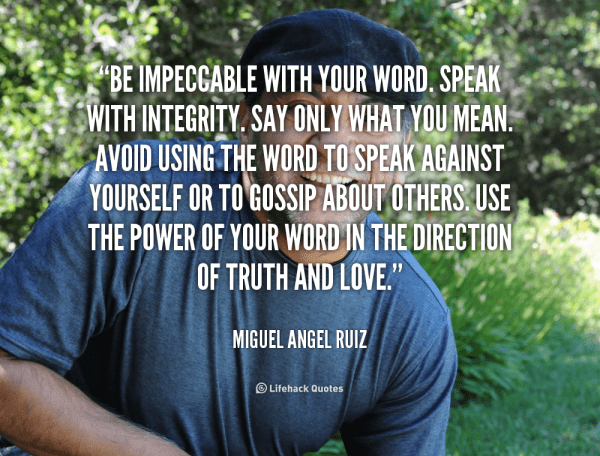 Like Aldous Huxley said, “It is only by taking the fact of eternity into account that we can deliver thought from its slavery of life. And it is only by deliberately paying our attention and our primary allegiance to eternity that we can prevent time from turning our lives into a pointless or diabolical foolery.”

Watch your words, they become actions

“Any fool can make a rule, and any fool will mind it.” ~ Thoreau

Words are the flagship symbols of human perception. They are the invisible hat rack upon which we hang the infinite hats of our thoughts.

They are powerful beyond measure, and yet they are powerless unless we understand them. If they don’t make sense, then there can be no imagery.

And if there is no imagery, then there can be no action. Words are like hollow sentinels that form an army of imagery that dances across the reader’s/listener’s imagination; tying knots into thoughts, portmanteaus into bon mots, until there is a web of life living, ever-so-shortly, in the span of a few words which are nothing more than squiggly marks on a page.

And yet they are so much more than that somehow, for they compel us to move, to realign, to refocus and evolve.

The “whole function of thought,” Charles S. Pierce surmised, “is to produce habits of action.”

Indeed, and the links between the function of thought and the habits of action are the mighty words of our language. With them we can imagine new imaginings; we can capitalize upon them by rearranging them into novel constructs that create new worlds for new creating.

With them we can topple governments, we can count coup on tyranny, we can create poetry that breaks the heart and makes the spirit soar. With them we manifest human flourishing. Indeed, our words become what we do.

Watch your actions, they become habits

“Everyone is gifted, but most people never open their gift.” ~ The Buddha

When it comes down to it, our health is dependent upon our actions. When we act in healthy ways, we experience healthy results. It really is that simple. What’s not so simple is paying close enough attention to the dictation of natural law so that our actions are in order with the cosmos.

This is tricky because we all too often place the cart of our cultural conditioning in front of the horse of cosmic law.

The reason why our human cultures are unhealthy and unsustainable is precisely because the horse of cosmic law is stuck ramming his head into the back of our unreasonable, imbalanced and extremely overfilled carts.

Living healthy is living simply is living in moderation. Health and moderation are so intricately linked that a “language older than words” is literally screaming it from the mountaintops. We just need ears keen enough to hear it. Healthy actions become healthy habits. Just as what we eat is what we are, what we do is what we become.

Watch your habits, they become character

“Do you not see how necessary a world of pains and troubles is to school an intelligence and make it a soul?” ~ John Keats

There is always the top-down method to attempt in order to get back to a place where you can implement the more effective ground-up method. But first, at the risk of sounding cliché, you have to seize the day.

If they are unhealthy then take a deep breath and get the horse back in front of the cart by reorienting yourself with the cosmos. Start the entire process over again.

Meditate on how your thoughts became words, how your words became actions, and how your actions became your unhealthy habits. Keep doing it. Meditate over and over again until you get to a place where you are brave enough to transform yourself (rebirth).

Watch your character, for it becomes your destiny

“The shoe that fits one person pinches another; there is no recipe for living that suits all cases. Each of us carries our own life-plan, which cannot be superseded by any other.” ~ C.G. Jung

It’s arguable that if you do not first achieve a healthy character, then you will not be robust enough to experience destiny. Your destiny will merely be what society has molded you into being. The experience of destiny is an awakened state, a conscious awareness of existential thresholds, a third-eye wide open experience of one’s life path.

Like Carl Jung said, “Until you make the unconscious conscious, it will direct your life and you will call it fate.”

It stands to reason that an unhealthy character is ruled by his/her unconscious. They are puppets of fate (puppets of culture, religion, politics, etc), and in their puppetry they have lost the primary experience of being free beings in an infinite cosmos.

As it stands, it seems as though the majority of us are not equipped to be creatures of destiny. A person of destiny is a person filled to bursting with bringing meaning to their life.

Like Robert Byrne said, “The purpose of life is a life of purpose.”

They are seared with freedom, radiating liberty and autonomy even as they embrace the all-encompassing fact that they are interdependent and one with all things. They are massive characters, subsuming cosmos from their birds-eye view of self-as-world and world-as-self.

Most of all, they are reminders to us all (for they are us, and we are them): that the individuation of the ego and the self-actualization of the soul are real possibilities. We have only to begin with the fledgling seed of a clear thought, and with enough healthy words, actions, habits and character, it can become a mighty flower of human destiny.

Gary Z McGee
Gary 'Z' McGee, a former Navy Intelligence Specialist turned philosopher, is the author of Birthday Suit of God and The Looking Glass Man. His works are inspired by the great philosophers of the ages and his wide awake view of the modern world.
Facebook
Twitter
Pinterest
Telegram
Mix
Tumblr
WhatsApp

I Have Come to Accept the Feeling of...

I have come to accept the feeling of not knowing where I am going. And I have trained myself to love it. Because it is only when we are suspended in mid-air with no landing in sight, that we force our wings to unravel and alas begin our flight....
Quote Library

3 Steps Towards Manifesting What You Desire Out Of Life

Are you A Co-Dependent Parent?

11 Ways to Expand Your Consciousness