Why Not Believing in Anything is Absolute Freedom

“You do not believe; you only believe that you believe.” ~ Samuel Coleridge

I’m about to cutoff one of the intellectual giants of human history… Johann Wolfgang von Goethe, you have the floor: “None are more enslaved than those who believe…”

Stop right there, Monsieur Goethe! He was about to say “…they are free.” But that’s irrelevant, governing the nature of his premise. It is belief in anything that makes men slaves. Allow me to explain: Belief tends to trap our thoughts into tiny nutshells. It can even trap entire realities into the finite space of a nutshell. These nutshells are filled with snakes eating their own tails. These snakes are never allowed any nourishment (knowledge) from outside the shell, because everything outside the shell is dangerous, poisonous, scary, and unknown.

These snakes become suppressed by their own oppression, and they have a tendency to become neurotic “snakes in the head.” In such a state of anxious fear, we’re inclined to maintain the hardness of the shell so as to remain comfortable and secure.

When we cling to the nutshell of our belief, we are declaring that our comfort is more important than Truth. Inside the nutshell, we’re more willing to remain comfortable and free of fear than to risk the discomfort of being wrong or facing the fear of the unknown.

Even if that comfort means we’re forced to eat our own tail or end up with snakes in our head. Our belief must remain rigid and inflexible, because otherwise all that dangerous, scary unknown knowledge might get inside and mess things up. We must not risk vulnerability. We must maintain our faith.

But, as Terrence McKenna said, “If you believe in something, you are automatically precluded from believing its opposite.”

This is the epitome of close mindedness, because our belief closes us off from even considering another person’s belief. It cuts off empathy and harbors apathy. 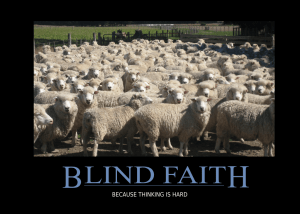 Even worse, it prevents us from living an examined life. Indeed, belief is the antithesis to an examined life precisely because our beliefs are somehow exempt from examination.

When really our beliefs should be the first thing we question. Taking things into consideration, that is to say philosophy, can help us with this.

Like Bertrand Russell said, “Thus, to sum up our discussion of the value of philosophy; Philosophy is to be studied, not for the sake of any definite answers to its questions since no definite answers can, as a rule, be known to be true, but rather for the sake of the questions themselves; because these questions enlarge our conception of what is possible, enrich our intellectual imagination and diminish the dogmatic assurance which closes the mind against speculation.”

Not believing in anything is absolute freedom precisely because neither our intellect nor our imagination are diminished by the dogmatic assurance which closes the mind against speculation.

Not believing in anything frees us to take everything into consideration. We become logically liberated, scientifically set free, and our rationality is relieved.

Healthy skepticism and an intimacy with probability become our shifting bedrock, our foundational quicksand. We’re free to swim in the waters of uncertainty rather than remain chained to the pillars of certainty.

When it comes down to it, letting go of belief is allowing ourselves the freedom of being wrong. It’s finally admitting that we are a species that is profoundly fallible and prone to mistakes.

It’s understanding, as Kathryn Schulz said, “Whether we wrongly think we can see or wrongly remember what we did on September 11, whether we are mistaken about pantyhose or string theory, what we are ultimately wrong about is always a belief. If we want to understand how we err, we need to look to how we believe.”

Indeed. My believing in the Flying Spaghetti Monster gets me nowhere, except maybe entertained. Better to simply take it into consideration as a silly belief that some people might have, and then laugh at it. Laugh at myself. Poke holes in my faith.

Question why I might believe that “his noodly appendages will save me from my sins.” Or why I insist on wearing a colander for a hat. As with all things, a good sense of humor can set us free.

Taking things into consideration is far superior to believing in things precisely because we are a fallible species. We happen to be a species with a big brain, which gives us a false sense of security that we have discovered answers to complex questions.

But when it comes down to it we’re merely big-brained naked apes fumbling and stumbling through a vast cosmos of which we have barely even scratched the surface.

Our human understanding of reality is more akin to a Planck-length balancing on a quark, teetering on an electron, wobbling on an atom, wavering on a molecule, which is precariously positioned upon an ice cube on the tip of an iceberg that we can hardly even begin to fathom. And that’s okay.

As I wrote in Bertrand Russel’s Ten Commandments of Higher Teaching, “caveat credentis: believer beware. Instead of believing in things, take things into consideration. It is quite simple to alter considerations. But it’s almost impossible to alter beliefs.”

This is because of cognitive dissonance. None of us are free from the clutches of this particular mental stressor. Best not to have a belief at all. Best to take things into consideration using probability as a guide.

Best to embrace cognitive dissonance, to dive into the unforgiving waters, to relish in its discomfort, to feel the burn of being a fallible, prone-to-mistakes, imperfect, naked ape going through the vain and futile motions of attempting to pigeonhole infinity into finite constructs.

We’re bound to come out the other side wielding a mind open to possibility, and a heart burning with a humor of the most high. Like Gerry Spence said, “I’d rather have a mind open by wonder than one closed by belief.”

Then my first act of free will shall be not to believe in free will at all, but rather, take it into consideration as a more conducive stance toward attaining truth. I won’t “believe” in Time, because Time only perceptually exists; where actually it does not.

But so what? I’ll refuse to “believe” in Truth, instead I will attempt to maintain a strong faith in human fallibility. Sitting on a bench will be the only time that I predicate a benchmark, but even the bench will be subject to questioning.

Here’s the thing: We live in a world where beliefs are rampant. Beliefs seemingly keep us grounded. So it’s understandable why we have them. After all, without belief it seems as though we’d all go crazy. But the opposite seems to be more the case. It is belief –especially unquestioned beliefs– that makes people go crazy. But, as Guy Harrison advised, “Hate the belief, love the believer.” Taking things into consideration, rather than believing in things, sets us free. It opens us up.

Not just our minds, but our hearts as well. When we hate the belief but love the believer, we are empathizing with the human condition itself.

We’re rising above the pettiness of the lizard brain’s fight-or-flight need for comfort. We’re elevating ourselves to a state of heightened awareness where we are able to utilize our evolved mind and trump our primitive brain. We’re transcending the outdated lower frequencies with updated higher frequencies.

Not believing in anything is absolute freedom because we’re able to magically rise above the silliness of it all.

We’re able to see how everything is connected to everything else and how attempting to stuff infinity into the finite nutshell of a belief is done in vain. It’s perhaps the vainest act of all. Better not to be vain in the first place. Better to stay where the magic is.

Better to remain in a state of constant awe, in love with the moment, bewildered and astonished by the grandeur of the unknown. Better to be like a humorous magician insouciantly daring to pull it all out of a hat.

Imagination free. Intellect untethered. Love unmoored. Humor dethroning all kings –be they kings of mind, body, or soul. Unlimited by belief, but limited by cosmic limits –whatever they may be. And Voilà tout! Magic becomes a real possibility.

In my exerience not beliveing in anything is fine, as long as you dont get as in your face and obnoxious as some believers. Ive found Atheists to be a narrow minded and tunnel visioned as theists. Ive seen that here on FB. As far as those who believe somethng goes, as long as they don’t try to convince me of anything or force their beliefs on me either personally or through legislation, I don’t care what they believe. I have no need to have everyone believe the same things. HOWEVER, if they feel the need to broadcast their beliefs… Read more »

Belief is a power but not believing is a super power.

I think you missed the mark a bit. Definitely what you say is true about absolutely belief, but *conditional* belief is where people accept something as true as a working principle, but also remain open to altering, changing, modifying, or outright throwing out a belief. Taking your assertion to it’s natural extreme, one could say “I don’t believe pointing a gun at my head and pulling the trigger will kill me”—but it’s small consolation when that refusal to believe ends up with you dead on the floor. People used to believe humans could never fly… but there were some who… Read more »

I’m gonna have to read it again.