5 Tips to Help your Child Process their Emotions 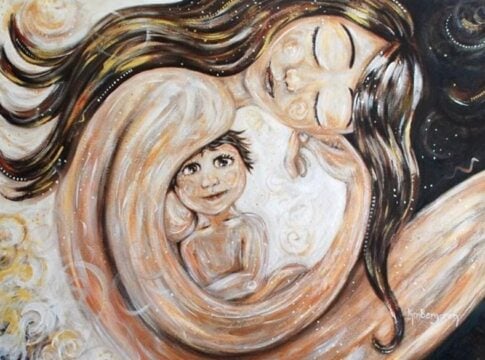 “Giving a child the freedom to be himself is the most extraordinary gift a parent can give.” ~ Jay Morgan

For thousands of years reality (as we know it) has been governed by what we can perceive with our five senses, the physical world, or also known as masculine energy. The measure of a person could be gauged by what they looked like, how much money they had, the material possessions they owned and so on.

A person defined him or herself by the labels they attached to themselves. Things like age, job title, gender, nationality, and religion were all used as a means of identifying who we thought ourselves to be. Very little importance was given to cultivating our emotional health or embracing our feminine energy.

For a parent, raising a child meant pushing our children to succeed externally. This meant excelling at some sort of activity, getting good grades, having friends and maintaining a popular image socially.

Most people weren’t parented in a way that helped them identify and process emotions in a healthy manner thus they were not able to give these tools to their own children when they had them. For most of us growing up, very little importance was given to things such as emotional intelligence, and vulnerability.

But times have changed. It is now very much agreed upon that the way in which we deal with our emotions is imperative to living a happy and fulfilling life. How one deals with their feelings is always learned in childhood and has very much to do with how one was raised and reacted to when they were young.

Helping our children, especially our male children who have often gotten the short end of the stick when it comes to being able to feel without fear of ridicule, process emotions is imperative in aiding them into becoming a well-rounded adult.

Below are 5 ways to help our children process their emotions healthily and effectively:

“You don’t ‘fix’ your child. You create the conditions for them to rise.” ~ Dr. Shefali Tsabary Our culture is filled with unfortunate stereotypes that have impaired the evolution of our growth emotionally. One of these beliefs is that men, or boys shouldn’t feel emotions, and this can lead to number of emotional issues later in life.

Emotional unavailability, anger issues, and depression are all examples of how the fear of feeling emotions may manifest eventually. When our boys feel safe to feel without being judged or ridiculed this helps them to not only be happier all around, but as they become adults, to be more loving partners, empathetic fathers and compassionate people in general.

To behave as though emotions are only for girls is actually quite silly when we really think about it, and to instill this belief into our children is a disservice to them in the long run.

2) Be present without trying to ‘fix’ everything for them

It is never fun as a parent to see your child hurting. It is often so painful that our first instinct is to attempt to fix things for them. Rather than just allowing our child to sit in their pain and feel it, we want to jump in and think of a way to somehow make it go away.

But a present and conscious parent knows this isn’t always possible. And many times, this reactivity takes away from letting our child process their pain in a healthy manner. Sometimes all our child needs is a hug, and a simple, “I’m so sorry you are feeling this way, but I’m here with you and for you.”

Often our children just want to be held and empathized with. This holding space for them as they sit in their pain can be quite healing and powerful in their journey into adulthood as they learn from us how to do this for themselves in the future.

Ok, so to an adult losing our box of crayons or getting picked last for a game at recess doesn’t sound like that big  a deal. However, for our children things like this can be devastating. One of the worst things we can do as a parent is make our children feel as if their emotions are not valid or ‘right’.

Letting all emotions be ok is a lesson in authenticity for our children. It doesn’t mean we need to coddle them or fuel the fire by pretending as though we also believe their lost box of crayons is the end of the world, it only means we hold space for them to feel however they naturally do without telling them they are wrong for it. Ultimately they will be able to embrace and identify all of their natural occurring feelings without denying the truth of the present moment.

4) Cultivate understanding rather than blame

“There is a huge amount of freedom that comes to you when you take nothing personally.” ~ Don Miguel Ruiz

A priceless tool we can instill in our children is the art of understanding why someone did something, vs. immediately jumping to blame. If we consistently jump to blaming someone or something else as our first reaction in the face of our children’s adverse emotions, we begin to instill in them a victim mentality. “Everyone is always doing something TO me,” becomes the way they begin to deal with life’s circumstances. However, by walking them through how the other person may have felt and helping them put themselves in the other person’s shoes we help them learn that not everything is always about them.

Everyone is acting from their own level of consciousness and understanding and helping our children learn not to take everything personally will lead to confidence and compassion for others over time.

Helping our children identify and process their emotions is done most effectively by talking to them about them! Listening to their stories without judgment, and then asking them questions such as, “how did that make you feel when that happened,” helps them to define which emotions they are really feeling.

It is no surprise that as adults we often hide our real emotions or reactions even from ourselves sometimes for either fear of judgment or because we have no idea what we were really feeling about something. By talking with our children, or suggesting they keep a journal of their day, or even make art based on how they are feeling we create a space for them to communicate to us and to themselves what they are feeling and why they are feeling that way.

This safety to talk about their most vulnerable aspects proves to be priceless as they grow into adults. Communicative, and emotionally healthy adults will not only be more successful externally but will feel more confident and sure of themselves on the inside, which is all we can really ask for our children, right?