“Fractal geometry is not just a chapter of mathematics, but one that helps Everyman to see the same world differently.” ~ Benoît Mandelbrot

Our brains are fractal systems. Our minds are the far-reaching nonlinear branches of these systems. Fractal systems produce fractal behavior over time. It’s found readily throughout nature: from trees to neurons, from rivers to the respiratory system, from the circulatory system to geological fault lines, from snow-flakes to earthquakes.

It’s a veritable smorgasbord of fractal interdependence. Why not try to apply it to psychology, at least as a powerful metaphor? 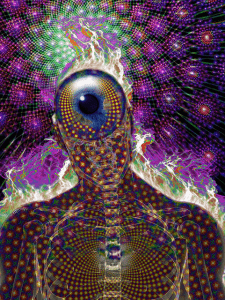 Why do natural systems tend to be fractal?

There are many reasons. As David Pincus Ph.D. explained, “Essentially, fractal systems have many opportunities for growth, change and re-organization. Yet they also are very robust. They maintain their coherence; they hold together well, even under tough circumstances. They are balanced in this respect, between order and chaos. They are simple, yet also very complex. This balance is often referred to as “criticality.” And the term “self-organized” is often added because systems tend to become fractal on their own, simply by putting a lot of system components together and allowing them to exchange information. Think of a party. All you need to do is come up with enough people at the same place and time and they will start to form complex patterns of connection with one another.”

If a fractal is generally thought to be a rough or fragmented geometric shape that can be broken into parts, each of which is approximately a reduced-size copy of the whole, then it’s not too far of a stretch to imagine our multi-layered Self as being psychologically fractal.

Imagining the Self as a giant party inside you is a great analogy. It’s probably a pretty boring party if you’re only aware of a tiny aspect of yourself – like when your control-freak ego is hogging all the spiked punch. It’s probably quite lively if you’re consciously aware of the many aspects of yourself, and everyone gets some punch.

And it’s probably especially festive if you are also embracing these aspects of yourself and you’re respectfully allowing all of them (even fear, anger, sadness, shame, grief, jealousy, etc.) to be what they need to be, rather than repressing them into shadows that operate covertly and bitterly beneath the surface.

Beyond this, even our perceptions can be fractal-like, since we all contain neuronally-based symbolic models that mirror and reflect the other people in our lives. In a very deep way, our Self is formed by nonlinearly reflecting other selves through mirror neurons.

There is even research showing how “Interpersonal relationships are organized as fractals and most recently that the self-concept is a fractal, with complexity being associated with health in both the psychological and social domains.” We are innate social creatures branching out both physically and interpersonally, after all.

“In the mind’s eye, a fractal is a way of seeing infinity.” ~ James Gleick Fractals are a means by which system dynamics get etched into form via self-similar, recursive loops. The Self too is a dynamic system getting etched into form. In his book, I Am a Strange Loop, Douglas Hofstadter describes the concept of the self as a kind of symbolic knot.

Hofstadter argues that we are not born with an “I” – rather, our ego is formed over years of symbolic, psychosocial entanglement. “The ego emerges only gradually as experience shapes our dense web of active symbols into a tapestry rich and complex enough to begin twisting back upon itself” (Scott O’Reilly).

This ‘twisting back upon itself’ is the strange loop. It is the narrative fiction of the Self. But it is a vital fiction (fractal psychology) that helps us to navigate the nonfiction (fractal cosmology) of the world. This vital fiction is a fractal feedback loop with many layers of self-similar connectivity. It’s a cosmic connectivity that we share with the rest of the natural world.

Governing the precept that fractal dynamics exists at every scale in measurable reality – from quantum to cosmic, it stands to reason that human consciousness is a conduit through which such fractal connectivity flows, both perceptually and behaviorally.

Delusion only arises when you focus on a single aspect of the vital fiction and make it your everything – your ego. When your ego is subjective, you believe that it is you and you are it. But when you look at your ego objectively, you become aware of the fact that it is not you and you are not it.

It is only an aspect of you, a fractal You, with multifarious layers within the overall vital fiction.Wisdom comes from looking at your narrative fiction objectively, and becoming aware of and engaged with the other aspects of your fiction. Even the fearful and ugly aspects. Even the mean and angry aspects.

For they are all the self-similar reduced-sized copies of the whole You, acting out according to their nonlinear relationship with your inner fractal psychology which is interacting with the fractal cosmology of the outer world. It’s a devastatingly delicious topology. Every single conscious thing is everything else, having forgotten it is everything else due to the inherent bias of also being a single conscious thing with limited and fallible faculties.

We have inner identities: loving, fearful, happy, sad, powerful, angry, and on and on. We have outer identities: familial, communal, local, national, global, and cosmic. Even if some of these identities are not yet self-actualized, they are still there, whether unconsciously or consciously, still fractally branching in or branching out. Still diverging up and diverging down.