There are different stages in our lives when we question not only our existence but the system we have been conditioned to fit into. After becoming a mother of two children, I have been compelled to look for better ways of nourishing these soulful beings in a world which is in a constant state of flux.

Its no easy task, mind you. When you consider our current education system and how it breeds competition, favoritism and molds these young minds so that they fit in a corporate environment, finding an alternative way of learning became imperative.

One needs an open mind and courage to pursue the alternative path. We received a lot of flak from family when we decided to put our son in a Waldorf school (based on the philosophy of Rudolf Steiner).

Not only was the distance a concern (the school is 60 kms away from our home) but also that he is not going to know how to read and write until grade 1 and he is already 6 years old. That didn’t deter us or make us reconsider our decision, because you would agree that the current education system doesn’t foster a child’s imagination, creativity or even honor their individuality. Reading and writing would become easier to learn once the foundation is strong enough.

“I am struck by the fact that the more slowly trees grow at first, the sounder they are at the core, and I think the same is true of human beings. We do not wish to see children precocious, making great strides in their early years like sprouts, producing a soft and perishable timber, but better if they expand slowly at first…and so are solidified and perfected. Such trees continue to expand with nearly equal rapidity to an extreme old age.” ~ from The Journal of Henry David Thoreau

“Everybody is a genius. But if you judge a fish by its ability to climb a tree, it will live its whole life believing that it is stupid.” ~ Albert Einstein 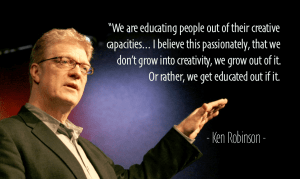 Modern day education system fails to recognise that each child is unique. Like how every plant is different and grows at its own pace; spinach grows faster than tomatoes. Similarly, each child is different and should be allowed to grow at his or her own pace. If you are too slow to learn, you probably will be labeled as a slow learner, or someone who doesn’t score too well in class and is definitely not the teacher’s pet.

But when each plant is given the right environment and condition to spread its roots, then it flourishes and blossoms. Similarly, these little beings of light should be given the freedom to choose their own path instead of molding them into another cog in a dysfunctional system.

Inevitably, we forget that we are part of nature too, so if nature has its own rhythm or pattern, why can’t your child? Let them colour outside the lines, take their own time to reach any ‘milestone’, as long as you are at peace with your child’s development, the opinions of others will not matter.

2) Play is considered a Waste of Time

“We don’t play, because we have to go to activity classes after school or have to do home work,” opined a 9 year old girl who was thrilled with her holidays because she got a chance to play. Play is regarded as a waste of time in many schools to an extent that children have shorter breaks in school. Even after school, there is a growing trend to enroll young children in endless activities.

Preeti Misra, Founder, Rainbow Bridge, Waldorf kindergarten and day care, in New Bombay, India, said “Early childhood is all about Wonder and Joy but I wonder is it so for a modern child today? School to day care or classes (Monday drawing, Tuesday skating, Thursdays soccer…) back home late and then to sleep and weekends are also all pre-planned with play dates, shopping with mamma and the list goes on and on. And then we have the Ipads, games and screen time that slips into the life of the days routine of the child.”

“Where is the time for the young child to breathe, sit back and relax, do nothing but just gaze out of the window and look. Where is the quite time in the day, a time without an agenda, a time to digest the days experience.

And then we wonder why is the child soul experiencing indigestion or is throwing up. We feel every experience needs to be a learning experience for the child. I wonder why?”

Play is the most engaging way to boost a child’s creativity, help in brain development, boosts immunity and so on. Research has shown that children who play outdoors regularly are happier, healthier, and stronger.

A study also reinforces the notion that today’s children lead a more passive, inactive life indoors than the previous generation. If the parents take the initiative to play with their child outdoors or take them for nature walks, fishing, walk in the forest and so on, then this would help the child understand his or her place in nature.

‘Too much’ of anything and everything is overwhelming, even for adults. Imagine a child being loaded with information, too many toys, given too many activities to do in a day, given too many choices, the outcome usually is a disruptive, stressful childhood.

Children these days are constantly bombarded with information which their immature brains can’t process or rationalise. Kids with a full plate of school work, extracurricular activities or sports each day may feel stressed and chaotic since they’re lacking the free time a child needs for creative play and exploration.

A study by American childhood developmental researchers reported that when children under five have too many toys, they lose their ability to play properly as they can’t concentrate on one thing long enough to actually learn from it.

Kim John Paynes in his book simplicity parenting says to use the extraordinary power of Less to Raise Calmer, Happier and More Secure Kids. “We have heard it so very often – Keep it Simple! Then why not DO IT! Simplifying is good not only for the child but for us adults tooo. Less in more when it comes to toys and clothes, pre-planned games and activities for kids and more is less when it comes to free play, outdoors and unstructured toys.”

4) Too much Screen Time My heart skips a beat when I see children as young as 2 years old playing on their parent’s phone or tablet. The proud parents say, “My child knows how to unlock my phone”. Schools encourage the use of modern technology to finish assignments and home works. This simply means that a child has to spend hours and hours on smartphones and iPads to do their research.

This stems from the growing belief that if the majority is doing it, it has to be right. We have been conditioned to follow the herd, do what you are told to instead of questioning what you are told.

Did you know Steve Jobs in spite of creating the world’s most popular electronic gadgets had limited the use of technology for his children at home? In one interview when asked whether his kids loved the iPads, he said, “They haven’t used it.”

One of the reasons for this would be the dangers associated with the use of technology. A number of troubling studies connect delayed cognitive development in kids with extended exposure to electronic media.

Have you ever told your better half to leave work at office and not to bring it home? Then why can’t this apply to children as well? Why are children given home work (the age group I am referring to is below 11 years) and expected to complete it within a short period of time.

When our son was barely 4 years old and was going to a regular school (which is shutting down now) was given home work literally every day, and once he was asked to write the alphabet 10 times. He never looked forward going to school and was in a miserable state.

In retrospect am grateful for that because it made us reconsider the current education system and take the big step of sending him to an alternative school. Multiple studies have found that students getting too much home work or extra assignments, lead to sleep deprivation, unhealthy levels of stress, as well as related health problems.

It not only burdens the young child but also eats into their free time. Apart from that, assignments don’t really engage the child because most of the times it is done by adults, tutors or ripped off from the Internet.

Every child needs the warmth, security and comfort not only by parents but mentors, teachers as well. Schools these days don’t provide that warmth or the right environment the child needs to nurture his higher consciousness.

Protect their childhood and give them wings to fly and roots to ground them! 🙂

On Children
Kahlil Gibran (From the Prophet)

Your children are not your children.
They are the sons and daughters of Life’s longing for itself.
They come through you but not from you,
And though they are with you yet they belong not to you.

You may give them your love but not your thoughts,
For they have their own thoughts.
You may house their bodies but not their souls,
For their souls dwell in the house of tomorrow,
which you cannot visit, not even in your dreams.
You may strive to be like them,
but seek not to make them like you.
For life goes not backward nor tarries with yesterday.

You are the bows from which your children
as living arrows are sent forth.
The archer sees the mark upon the path of the infinite,
and He bends you with His might
that His arrows may go swift and far.

Let your bending in the archer’s hand be for gladness;
For even as He loves the arrow that flies,
so He loves also the bow that is stable.

Bhavikahttps://fractalenlightenment.com/
Bhavika is a nature-lover, aspiring yogini, traveler and co-founder of Fractal Enlightenment, who strives to help fellow beings reconnect with nature and their true selves. Thank you for being part of this journey.
Subscribe
Login
0 Comments
Inline Feedbacks
View all comments

Around 70 years ago Joseph Campbell in his book The Hero with a Thousand Faces put forth a simple suggestion that every hero that...
Read more