Genius may arrive or it may not, but we’ll never know if we don’t at least attempt to put ourselves out there creatively.

Chasing genius is hunting the creative experience. It’s tracking down elusive flow states and pouncing on them with hungry hearts and metaphorical bloodymindedness. It’s digging down deep into the darkest depths of passion and pulling out frenzy and fire.

Here are three ways to put that courage to work.

“If you are immune to boredom, there is literally nothing you cannot accomplish.” ~ David Foster Wallace The mystical is the magic hidden in the monotony, the mythos concealed by logos, the numinous cloaked by the obvious. Finding the mystical in the mundane is realizing: moments are neither ordinary nor extraordinary, but thinking makes it so.

And the best way to do that is through creative play. As Ian Bogost intuited, “Play bores through boredom in order to reach the deep truth of ordinary things.”

Chasing genius is the epitome of boring through boredom. It’s a controlling of the locusts in order to gain a Locus of Control. But more importantly, it’s a letting go of that control and allowing the flow state to flow.

It’s using the reality distortion field like a magic wand in order to usher new worlds into being, and then tossing it into the abyss (Harry Potter style) in order to prevent fixed thinking and to keep reconditioning magical thought.

“The world is but a canvas to the imagination.” ~ Henry David Thoreau

Chasing genius is invoking the gods of creativity & art and sucking them dry in order to catalyze imagination. It’s milking the soulstream. It’s resourcefulness begetting ingenuity begetting originality. It’s allowing the cocoon of inspiration to annihilate thought and transform it into the butterfly effect of visionary experience.

Most of all it’s a dare, a double-dog dare, a triple-dog dare with its hair on fire, challenging you to probe the perimeters of the possible. To venture into unknown places, both figuratively and literally.

To enter into the realm of the numinous. To tap the cosmic ocean and realize that you were always tapped in.

You just forgot somehow, or you were blocked psychosocially, or you denied yourself your own fountainhead because you were afraid of the unknown.

As it turns out, catalyzing your imagination is the essence of getting intimate with the unknown. So buck up, buttercup! The rabbit hole doesn’t appear for just anyone. The wormhole doesn’t open for the faint of heart.

“We might say that both the artist and the neurotic bite off more than they can chew, but the artist spews it back out again and chews it over in an objectified way, as an ex­ternal, active, work project.” ~ Ernest Becker

Then there is the shadow side, the ghosting dusk of the human condition, where the demon howls against old night but secretly wants to sing in new light. There’s a madness here that few people talk about.

Mostly out of fear, but habitually out of self-doubt. Little do they know that by facing the demon, by daring to delve into their own shadow work, fear magnifies into fearlessness and self-doubt transforms into the ability to self-overcome.

Domesticating madness is allowing such magic to unfold. As Oscar Levant famously said, “There is a fine line between genius and insanity, I have erased that line.” Indeed. 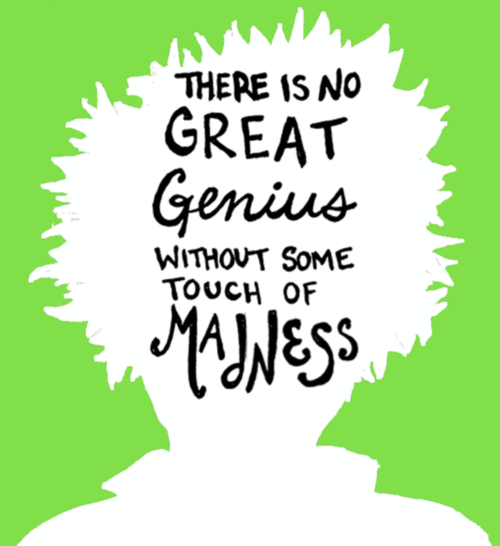 Chasing genius is tip-toeing over the barbed wire of that fine line. It’s risking the decent into madness in order to gain the elusive elixir of creative wisdom.

It’s juxtaposing brilliance with foolishness and emerging as a double-edged sword sharp enough to cut God. It’s discovering that our inner demons can be our greatest allies.

In fact, those demons often become the elusive genius we’ve been chasing. We just had to realize that they were us (our suppressed self) and we were them, all along. We just had to shine a light into the darkness, onto their suppression, in order for their howl to become a vital part of our song.

At the end of the day, we need more people who are willing to chase down their inner genius; to decondition their thinking, to catalyze their imagination, and to domesticate their madness. The more people chasing genius, the less stagnate, fixed, and unsustainable our culture will be.

The more alive we will be, despite entropy and death. The more we will be capable of “raging, raging against the dying of the light.”